The months are flying by - how is it possible that it's been six weeks since my last update?!
Today I've got eight videos to show you, six of which are nail art tutorials. Here we go!

This Inside Out nail art was inspired by the promotional poster for the film - I love all the little bubbles, and the silhouette seemed like a good idea! Unfortunately I STILL haven't seen this movie (there's always another more socially acceptable one when you're in your mid-twenties) but I will definitely hire it out once it comes out on DVD. I've heard so many great things about it! You can watch this tutorial on my channel here, or just click the picture.

When my friend Bridgitte (Eyedolize Makeup) was staying with me recently, she did some Minion lip art. I thought it was a really good theme, so came up with these little guys! I put quite a lot of detail into them, and I'm pretty happy with how they came out. I had to laugh at some of the anti-minion comments I got on the Facebook video for this though - I guess some people are sick of them! I will eternally think they're cute, though. Watch the tutorial for these here, or click on the picture.

I can't even remember how I came up with the idea for this next nail art. I sat down a few weeks ago and pumped out three or four designs in a row - and somehow they all turned out okay. This one was inspired by the new Jurassic Park movie, Jurassic World, and while I love how the dinosaur turned out, the people running away look like stick-men zombies... ☺. Still, it's one of my favourites of late and there's been great feedback for it. I've also seen some cool recreations. Watch it here, or again, click on the pictures. 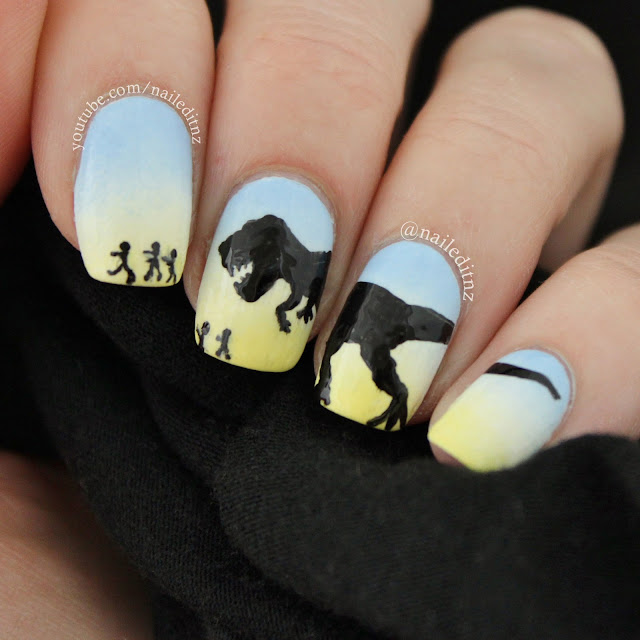 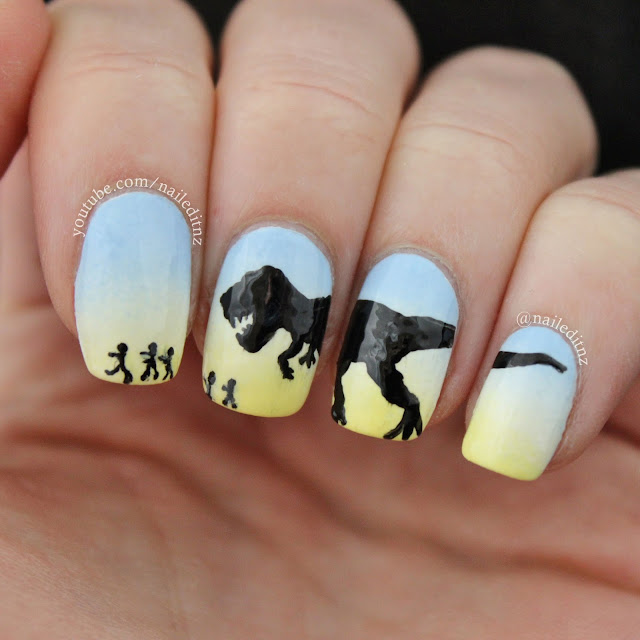 If you've followed my work for a while, you'll probably know I'm a big Taylor Swift fan. I can still remember the first time I heard Love Story (as a 16-year-old!) and I've been a Swiftie ever since. My latest Taylor Swift nail art is inspired by the music video to Bad Blood. I had to watch the video about four times to decide on the themes I was going to draw from it, and as you can see I went with fire, weapons and a pretty badass silhouette. Click here to watch the tutorial, or click on the pic... you know the drill. 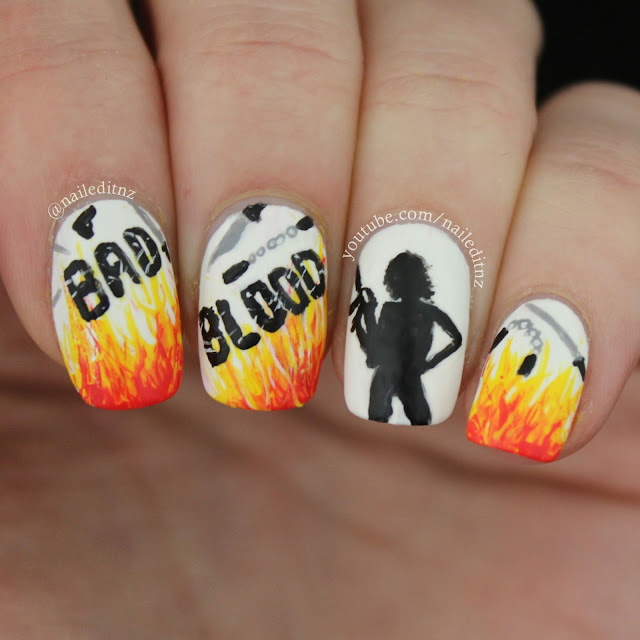 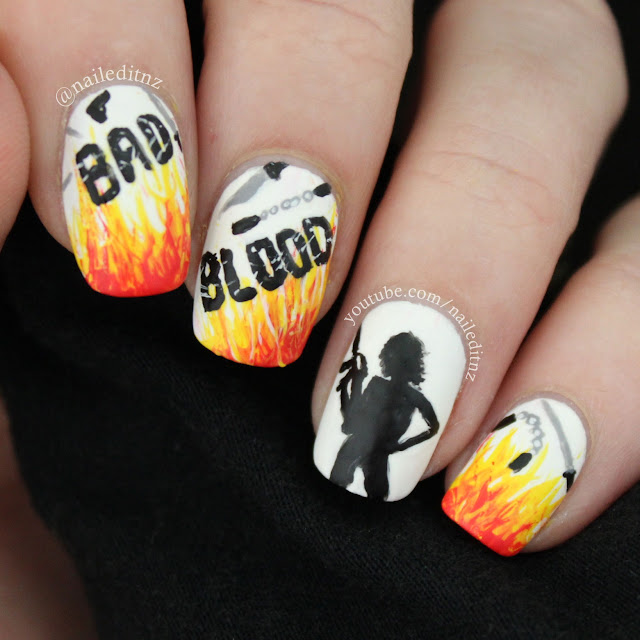 I laughed so much editing the next video! It was one I had filmed a few weeks prior with Bridgitte, and is called the "Blindfolded Nail Art Challenge." Since it had been awhile since filming and I hadn't checked the footage I had no idea that it would be as fun! I was literally crying with laughter, tears pouring down my face and having to stop editing to recover... I just look like such an idiot!
You can watch this here, or click the picture. 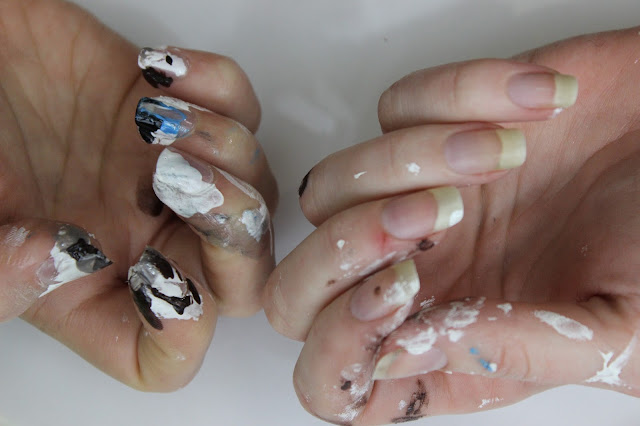 This next design was a nightmare to film. I did nine nails off camera easy as, but it was impossible to keep my nail facing away from me while sponging. I couldn't believe how difficult it was; I'd do it on the wrong angle, or merge the colours too much and it'd go brown, or the sponge would dry up... yuck. I ended up giving up and flipping my finger around, which made it a lot easier. Still, I like the way it came out for the most part. I did this mani to show my support for same-sex marriage - congrats, America! Watch here, or click on the nails. 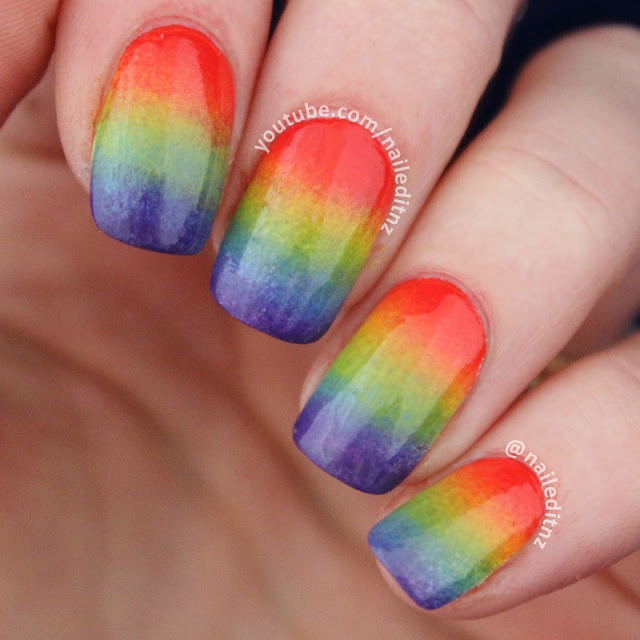 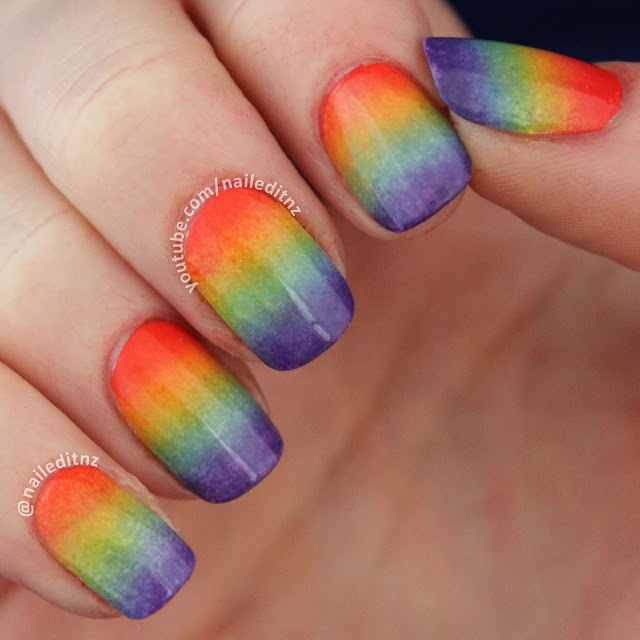 These Harry Potter nails are probably my favourite out of all of today's nail art! They were inspired by some awesome fan art, but there was no watermark and I've struggled to find the artist's name to credit them. If it ever turns up I'll update this ☺. I recently re-watched all the movies and was inspired to do these. I think they're pretty cute - Ron with his freckles, Hermione with her little Gryffindor bow and Harry with his funky glasses. As you'll see in the picture after this one, I also painted the Harry Potter logo on the thumb.
As usual, click on the pictures to see the tutorial, or go here. 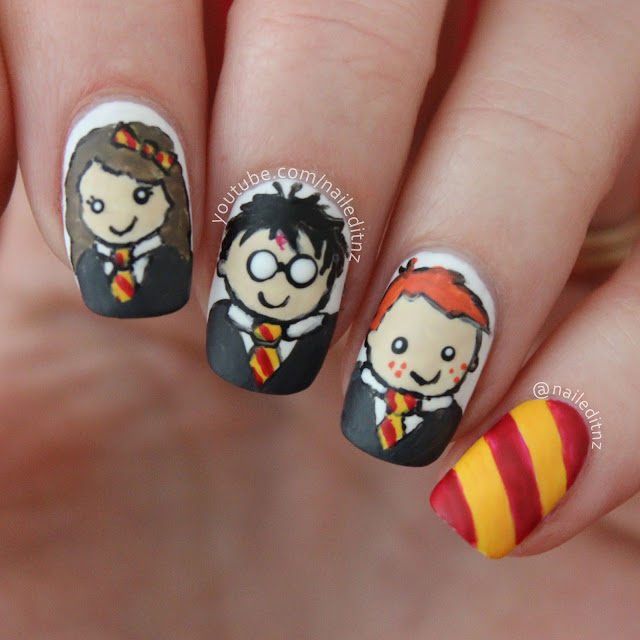 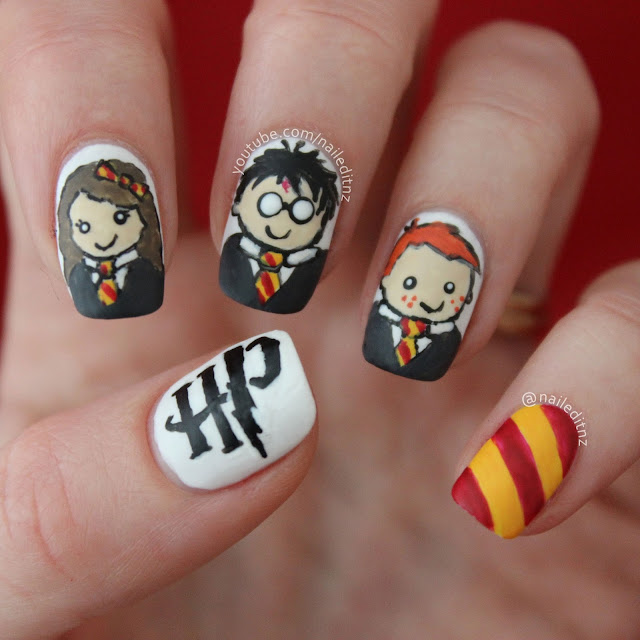 Finally, this is today's video! I wasn't actually going to publish it until September, but I've had a heap of followers pleading for it to go up sooner, so I decided to put it up now. It's actually a follow up to my "How to grow your nails LONG and STRONG" video - and one that was promised almost a year ago, whoops. In it I tell you all about cuticle oil and the countless benefits it provides for your nails, then talk you through some of my favourite brands. Hopefully there's enough variety there for everyone to be able to find at least one oil they can easily purchase from where they live! Click here to watch the video, or just click on the play button below.


I hope you like my recent nail art creations! I've got three more pre-recorded videos that I'll be releasing weekly, and two challenges that I'll pop in as bonus videos. Then I'll need to film some more - something I really haven't had a spare second to do lately! I've got about 60 requests and ideas written down to inspire me though, so it won't be difficult finding a theme at least ☺.
See you in a month or so.