Happy New Year! For the last two days my Facebook feed has been filled with people reflecting back on 2014; the good, the bad and the heinous. Personally, I'm excited to finally see 2015, as it's the year I move from my home-town to New Zealand's biggest city, Auckland. One month to go!

I celebrated the New Year with some of my favourite people, having a few (okay, quite a few) drinks and playing some hilarious games. I was introduced to Cards Against Humanity - it's so bad that it's freaking amazing. The party was heaps of fun, and to make the night even more interesting we had a bit of a detour on the way home... It was after midnight and we passed a young drunk girl stranded on the side of the road, attempting to hitch a ride in a dodgy suburb. We picked her up and after ringing her mum (who refused to pick her up from a neighbouring town - Mother of the year), we took her to the police station, where they organised her a ride home. She was a bit of a mess, but at least she was safe. I woke up today feeling fine (which is always good after a night out!) and went for a long walk in the beautiful sunshine with Chris (hubby). After that, I was feeling inspired so sat down and did some detailed nail art inspired by The Walking Dead nail; the tutorial will be up next Friday on my YouTube Channel, but you can see a sneak peek here.

So 2015 is off to a good start! I decided to combine this post about my New Year's nail art (that, as you can see, is EXTREMELY New-Years-y) with my annual blogging resolutions. I'll review the ones I made last year, see how I went and make some new ones. 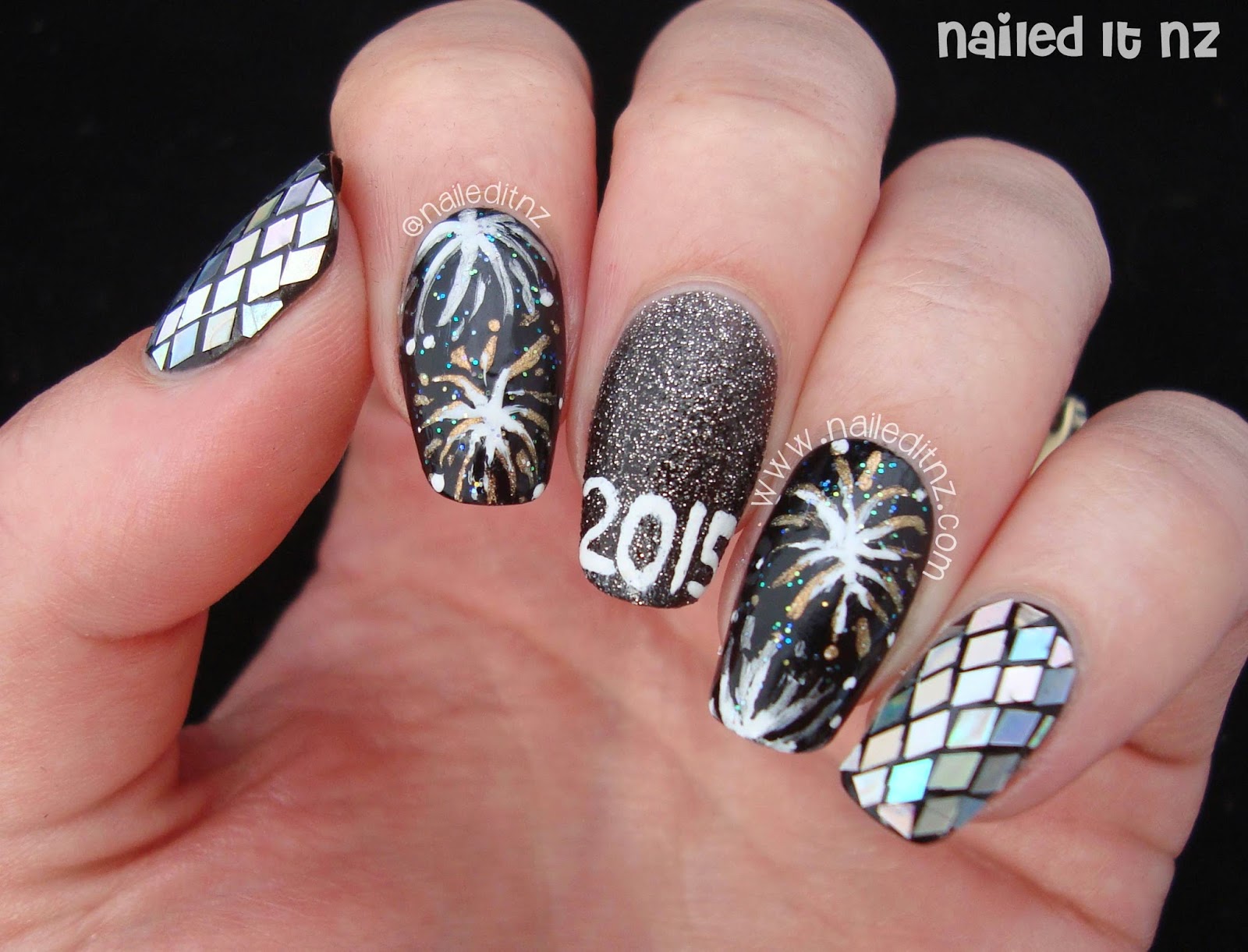 So, what did I want to achieve in the nail world a year ago?

3. Complete (and do well) in my nail technician course (starts February!). I want to be the BEST.
Haha, well, I'm not the BEST, that was a bit optimistic... but I was the first one in the class to finish, and did so three weeks early ☺. I've also run my home salon for the last six months, although that's closing down at the moment as we're moving soon, and I'm not sure about how possible it'll be to re-open it in Auckland. I've got other plans up there anyway.

4. Do something to organise my reviews. They pile up and sometimes I feel like all I'm doing is them!
Yeah... I quit unpaid reviews. That worked. The first time you get a free polish it's amazing, but after a while you just get weighed down and there's pressure and too many emails and ugh. It was fine when it was just Born Pretty Store, but suddenly there were a dozen different brands I was doing things for, and one day I realised it wasn't worth it. I found it limited my creativity and was turning it into a job, and an unpaid one at that. Plus, as a blog with a fairly large web presence it's expected that at some stage there would be compensation for the hours spent promoting/reviewing a brand, and so for most companies that's my new policy.

5. Get a job in a nail salon. This is underway! I've got several salons interested.
I was thiiiis close to working in one, but realised I was better off going my own way. The girls I was going to work for were lovely, but I'm so happy with my decision ☺.

6. Do more media-related stuff. 2014 has a tough act to follow - 2013 was incredible. On TV, in the newspaper, on the radio... And I got to do the most amazing things! I did enter The Amazing Race Australia - but I doubt anything will come of that.
Yeah nah, this didn't happen. I think 2013 will go down in my personal history as one of the best years of my life. It was incredible, and in comparison 2014 was disappointing. When I'm ready, I'll look more into media stuff, but I'm a tad wary of journalists and the media.

7. Get to know other bloggers better! There are several who I'd love to get to know properly but life just gets in the way, plus it's a bit weird saying "hey, wanna be blogging BFFs?"
LOL, what a strange resolution, I don't even remember writing this! I guess I got to know a few more bloggers? I've spent more time with real-life friends this year instead.

8. Maintain a good work/life balance. My blog, my YouTube, and my hopefully soon-to-be job in a salon is my career, and I love it! However I love it so much I can quite happily forget about the rest of the world, including friends and my husband. So I'll make sure that doesn't happen too much this year!
Well, there was that major PMS-fueled burn-out around October... that was unprecedented. That was the first time I ever DIDN'T want to do my nails, do the blogging/YouTube thing, but maybe it was a good things. Re-evaluating priorities and the lot. I feel things are pretty smooth now ☺. 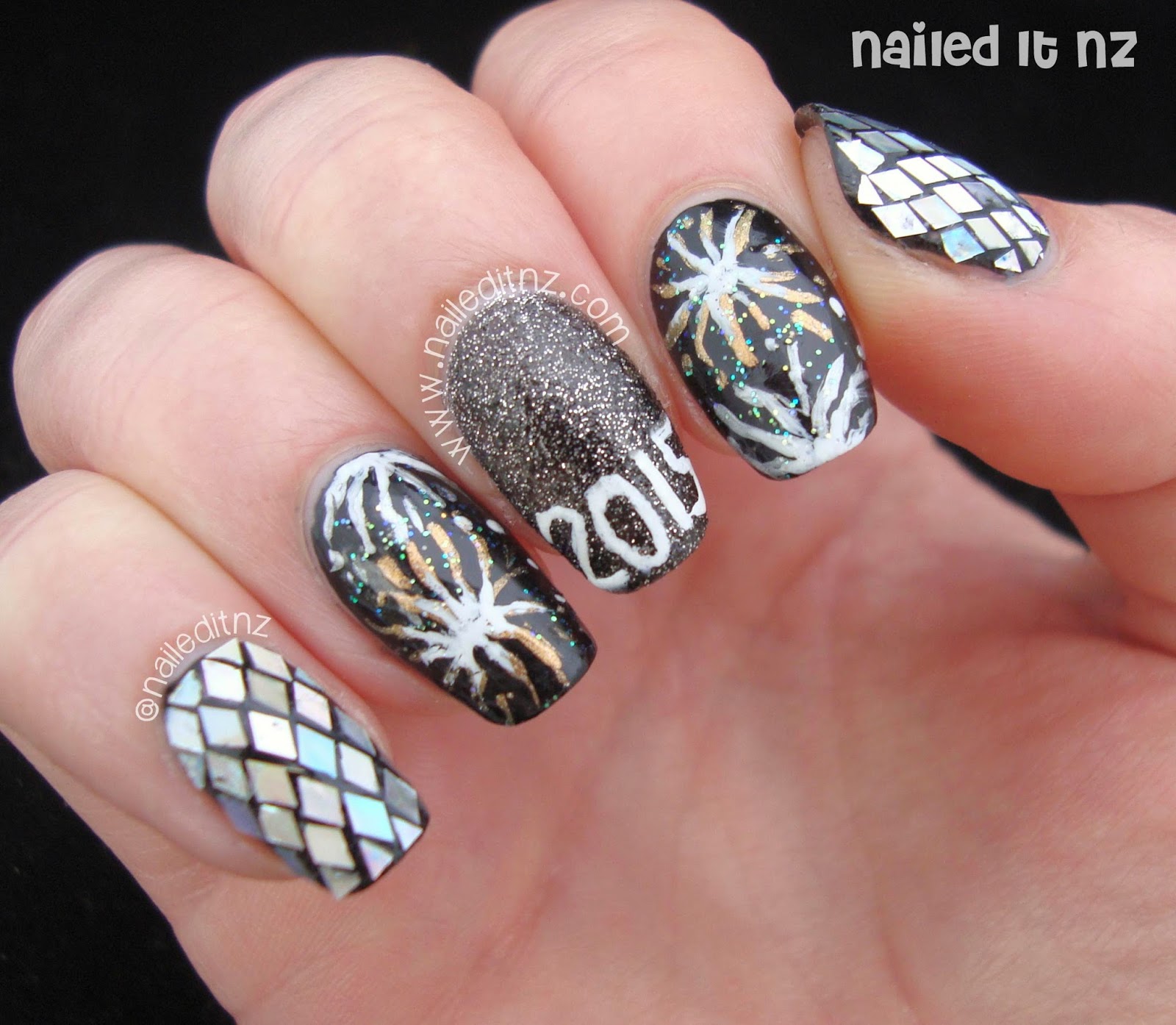 2. Reach 50,000 YouTube subscribers (yes, I'm well aware this is unlikely to happen, but a girl can dream!)

And that's it. I'm going to be pretty busy this year, so we'll see how this all pans out ☺. 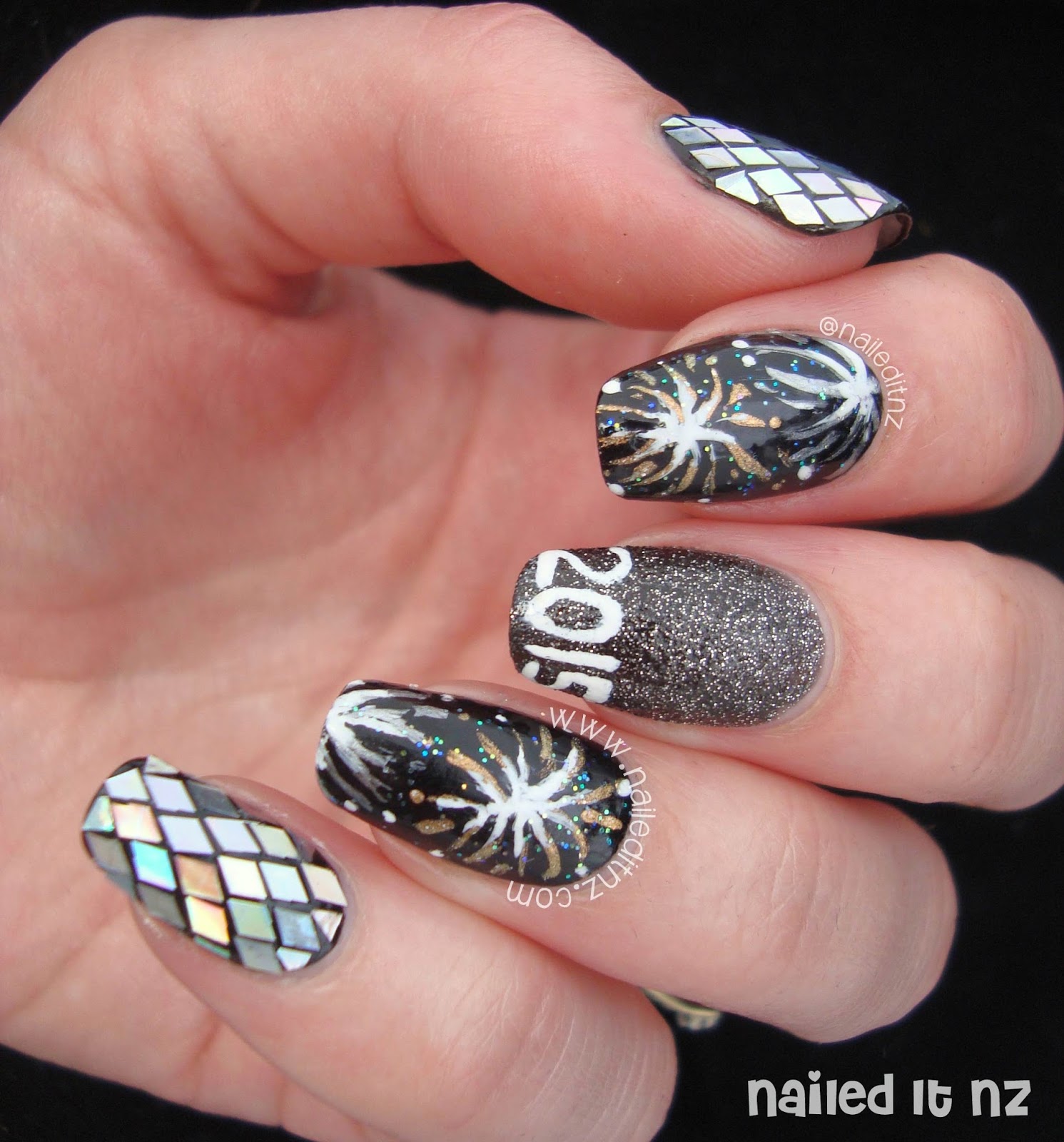 So, the nails! I used six nail polishes (excluding the top and base coat), and some silver diamond glitters from Born Pretty Store for this design. I haven't filmed a tutorial, but if you're wondering about how I apply the glitters I do have a tutorial for them, here.

As you can see, I made a couple of disco ball nails on each hand with the diamond glitter, which was time-consuming but beautiful! I didn't stick them down quite as well as last time though, and during the night pulled a few off. On the middle nail I've used a gorgeous polish by Nicole by OPI, from the Gumdrops collection; it's called A-nise treat, and it really is just that. Over that I've painted "2015." And then, on my last two fingers I've painted fireworks. If you want to see how I usually do my fireworks nails (I changed these slightly) watch this tutorial. 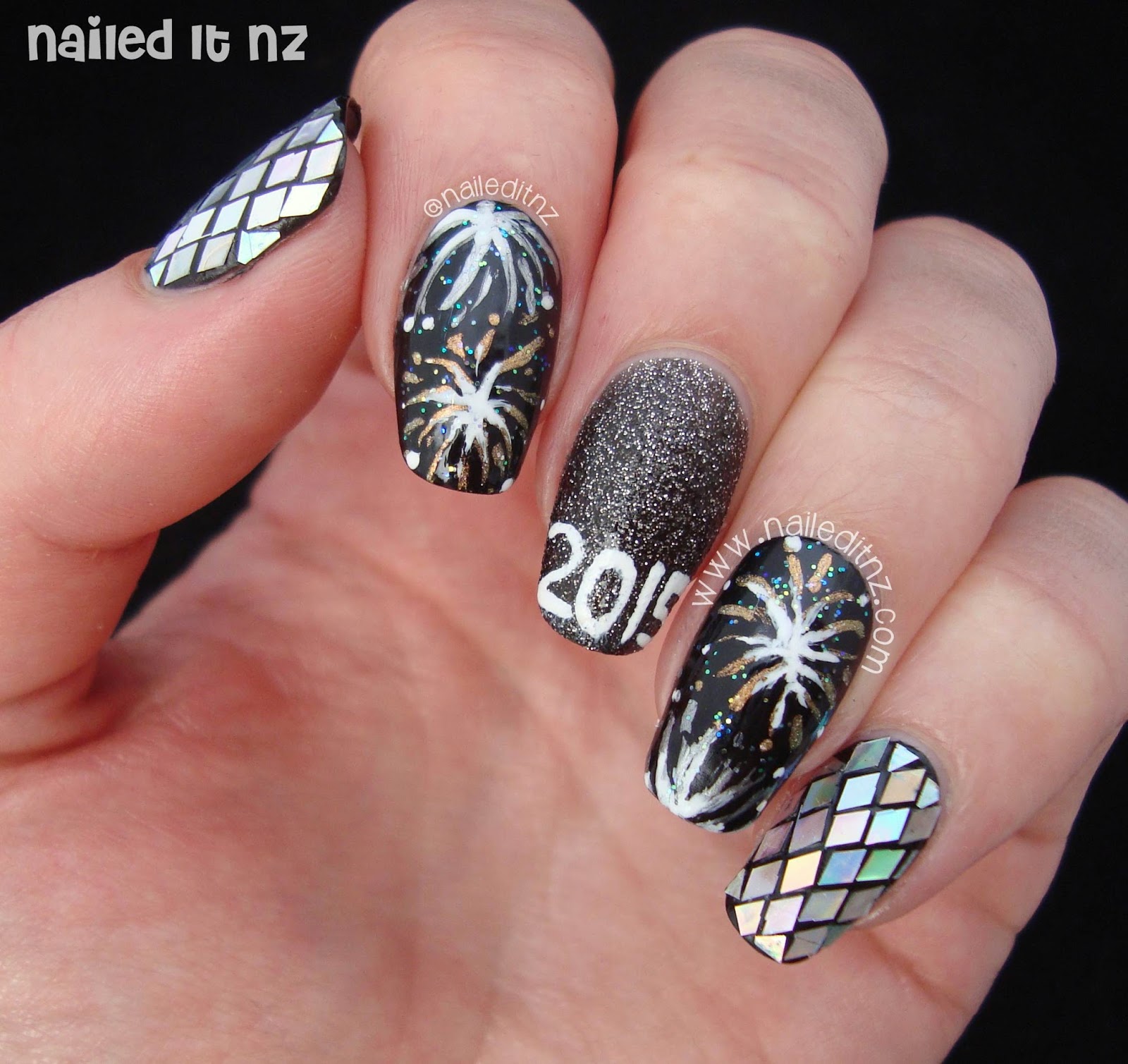 Here's a final shot of both hands. 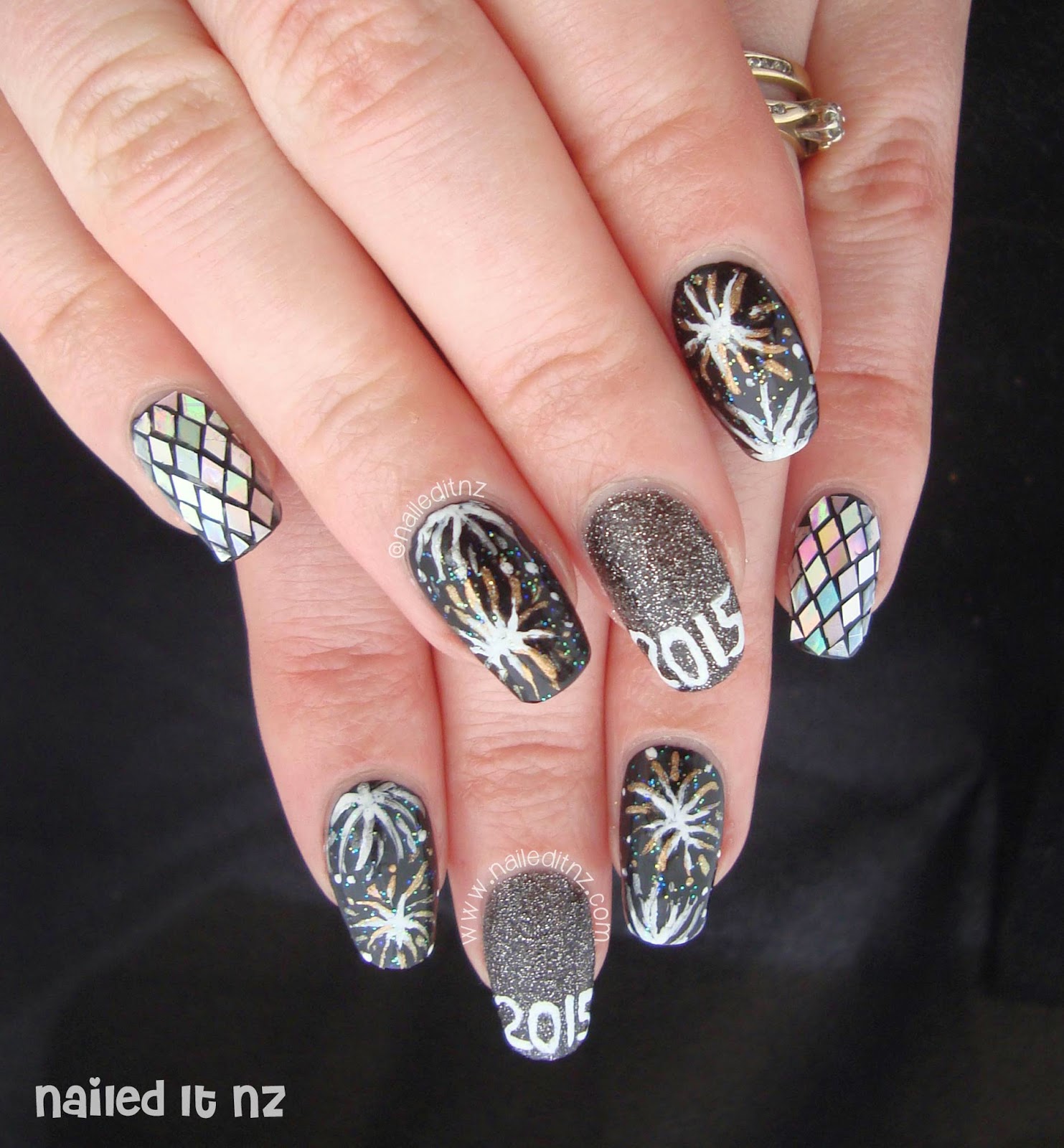 I'll be back tomorrow with a new tutorial, and shortly after that will have a post showing you my favourite nail art of 2014. Hope you like these nails and had a great New Year's - let me know what you got up to!
♥