Out of all the experiences I've had since starting Nailed It NZ, there are two that easily stand out as best. They're not prizes I've won, or celebrities I've met or anything dramatic like that; they're spending one-on-one time with fans. On two occasions, now, I've had a chance to meet someone who's followed me online for a while, and it really is the coolest thing ever. Earlier this year I met Katie, and we went shopping in town for an hour or two - it made my day! And more recently, I met Carwen and did these nails for her. She'd been talking about visiting my little salon for a while, but as she lived 3-4 hours away I wasn't going to hold her to it, especially as she was still in high school and would have to rely on someone else to get her here. But one day I got an email from her, saying that she was coming down to see me and wanted to book an appointment - I'm pretty sure that I was more excited that she was!

When she arrived, she wasn't 100% sure on what she wanted, so we talked a bit to think up an idea that'd be very "her," unique, and worth the drive. We had both discovered online that we were Taylor Swift fans, and so we ended up basing a design off her cats; Meredith and Olivia. They're funny looking, cats, actually, with strange little floppy ears but still completely adorable! Here's a picture of the nails. 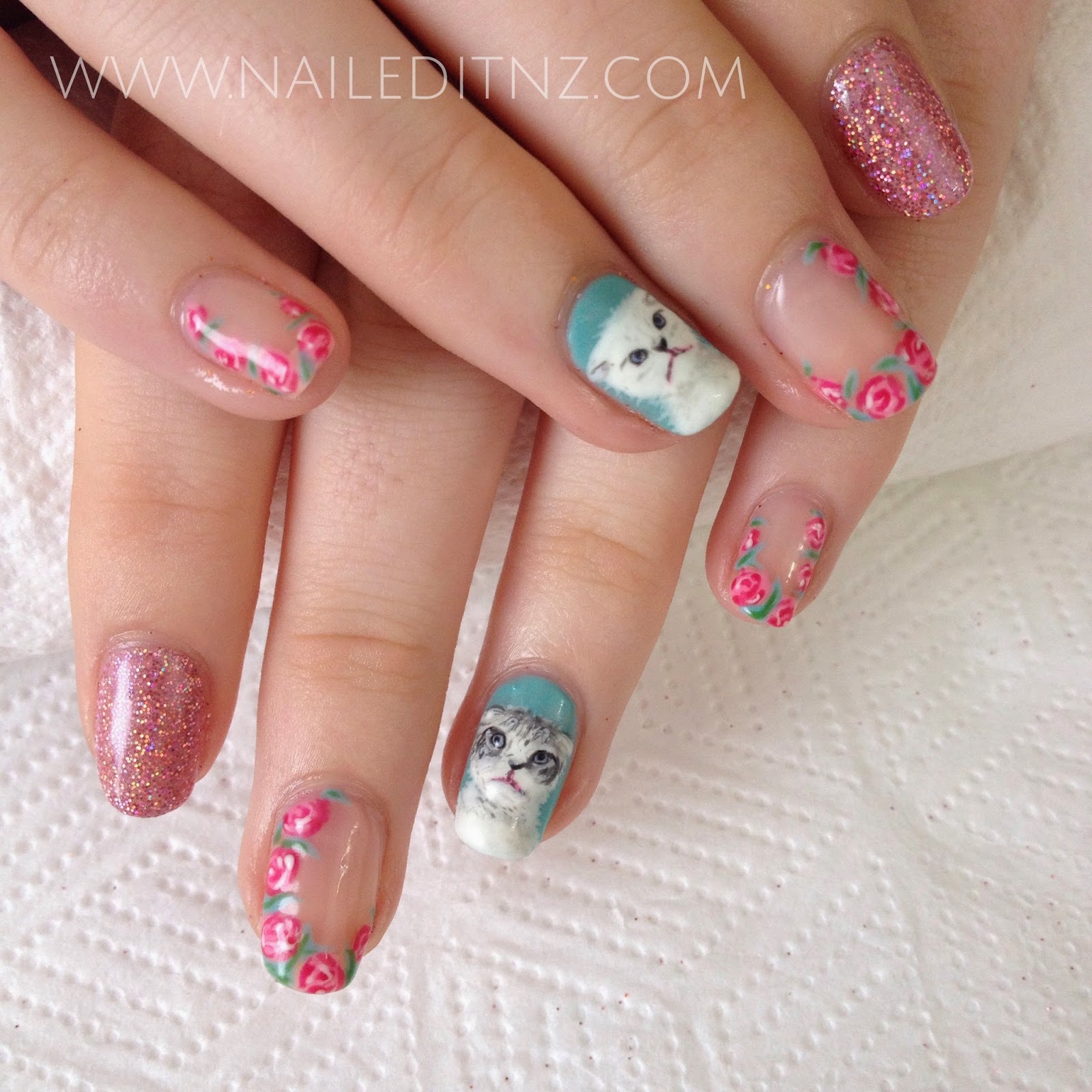 And here's another shot that includes some snaps of the cats, so you can compare them. 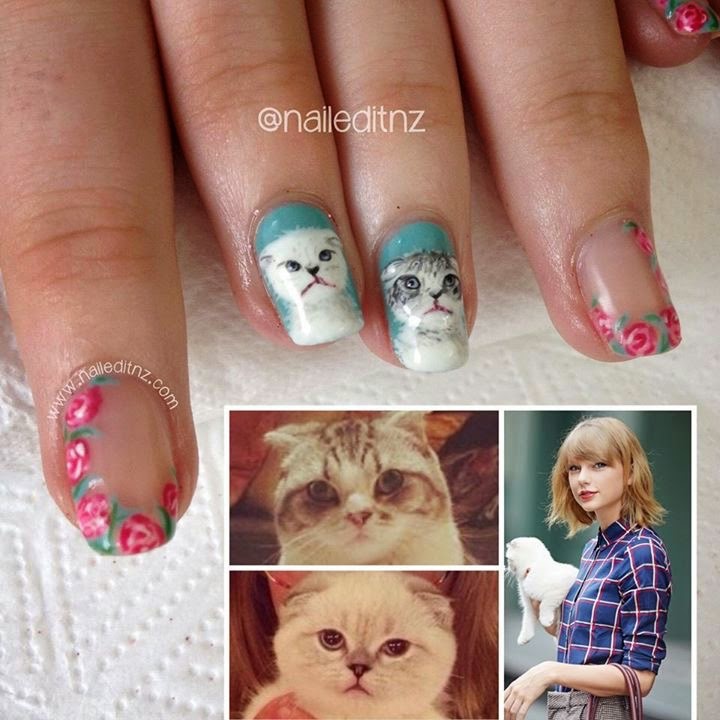 Carwen came up with the idea of using Taylor's cats as inspiration, and I thought it was genius ☺. As you can see, we also added some roses crawling up three of her other nails, and a super sparkly glitter nail, done using this technique. 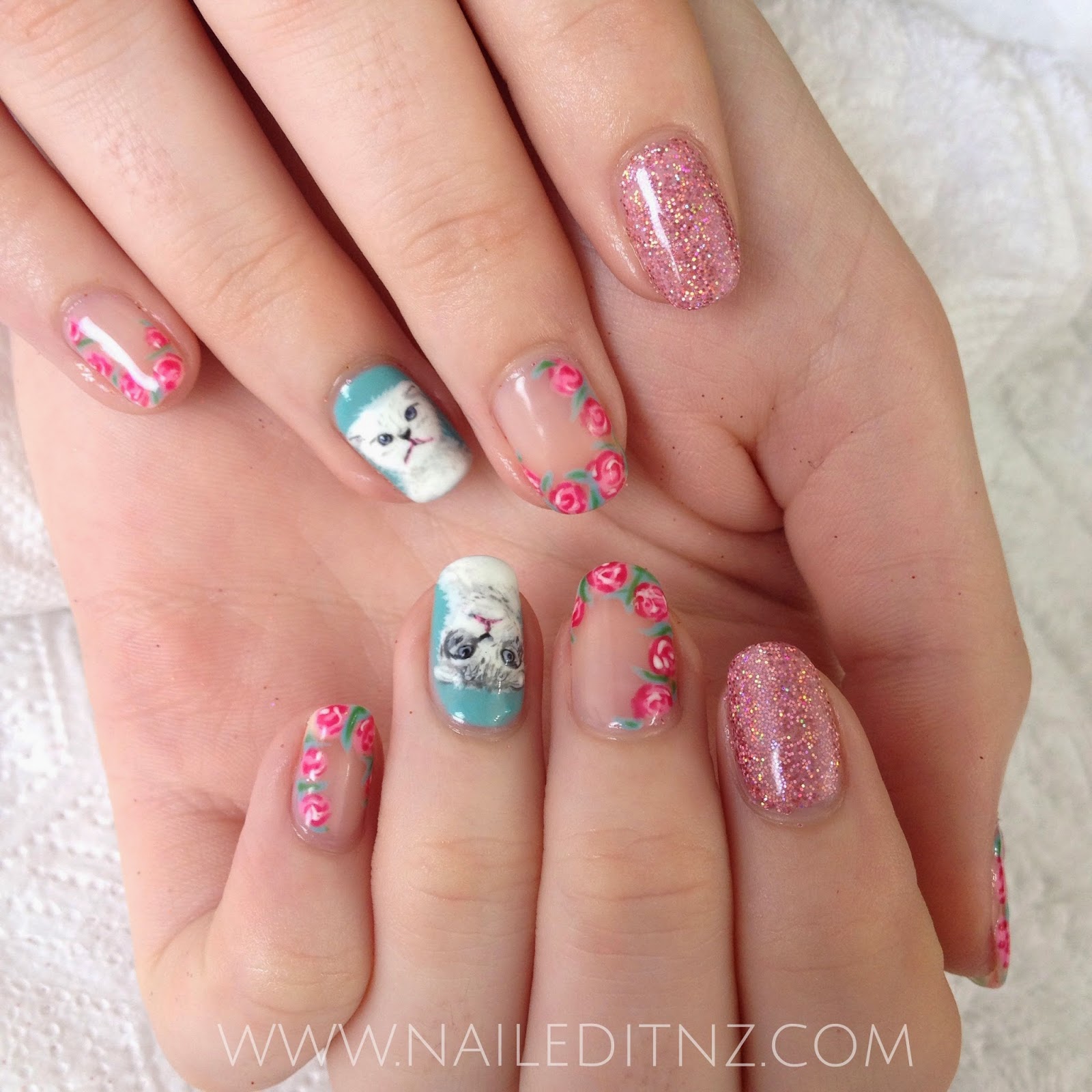 We had this slightly hopeless goal of getting Taylor Swift to see them, but although we had heaps of lovely people tag her for us I don't think she did. Then again, if I was a international celebrity I probably wouldn't comment if I did see them, as everyone would just go nuts. Haha, so there's a chance! 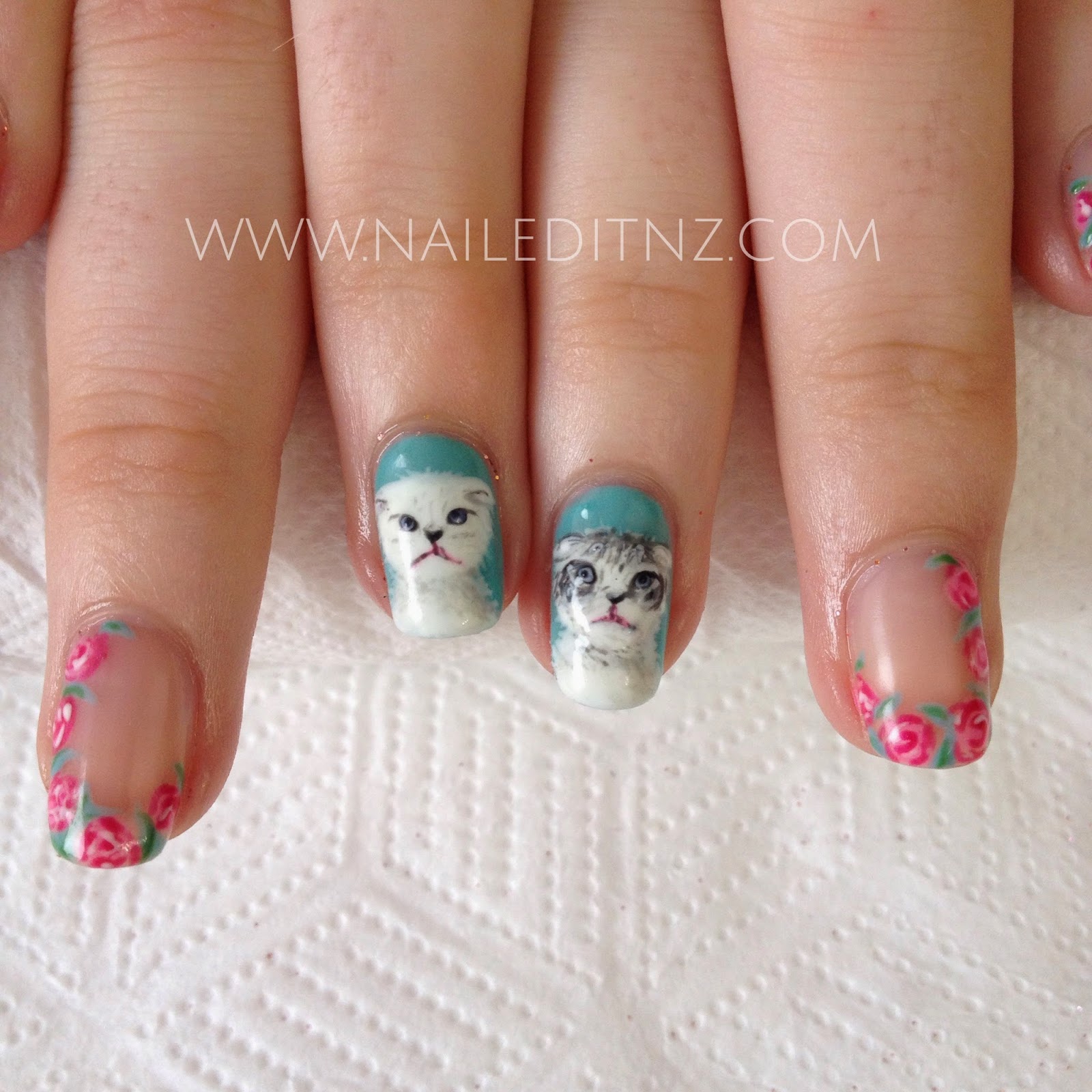 It was just a week or so before Taylor's new album (1989) came out when Carwen visited, so we were both very excited! We even played all my Taylor Swift songs while painting these ☺. It was just a fun, girly morning that I'm pretty sure we both loved. Best part of blogging, hands down. Love it. 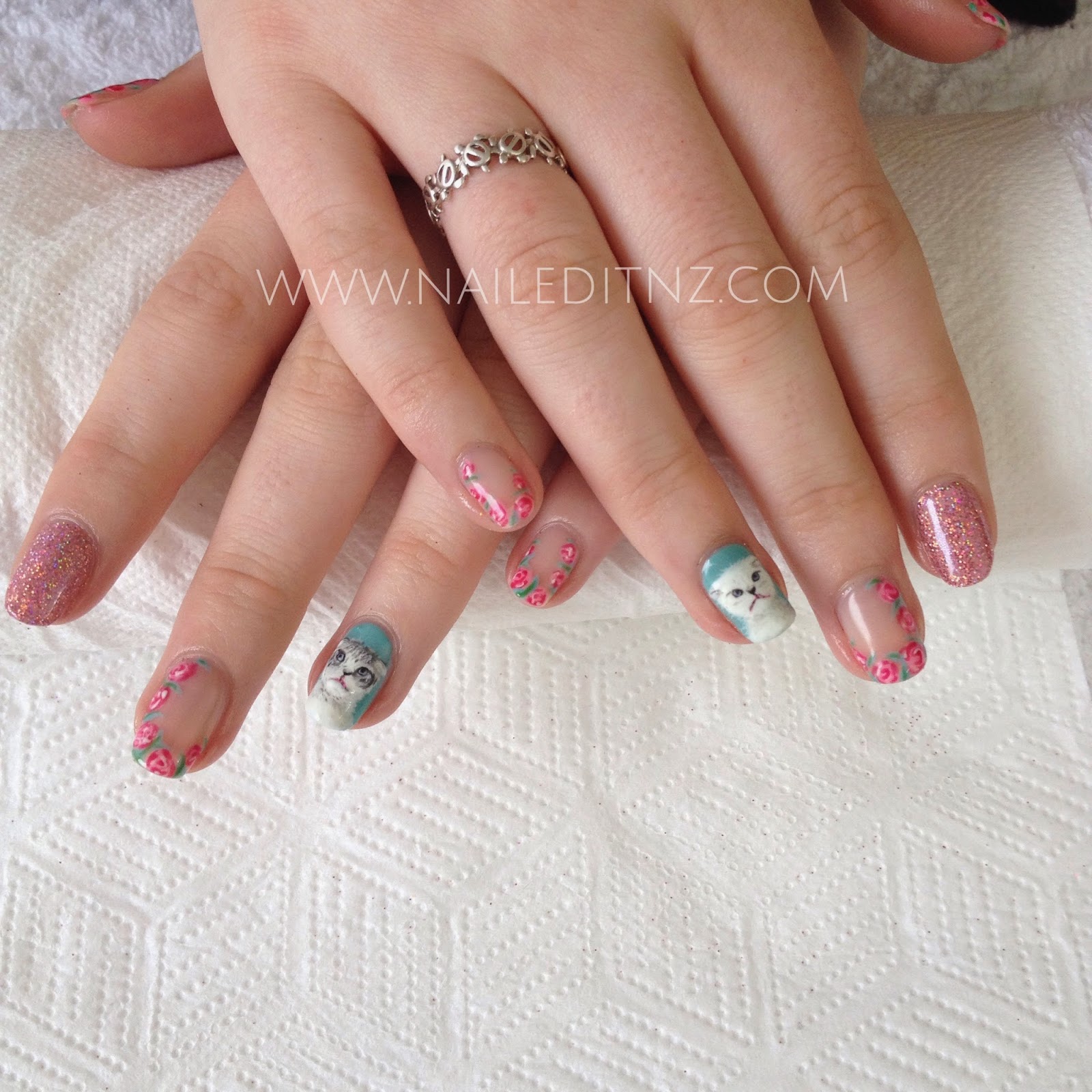 So thank you so much, Carwen, for visiting me - I decided I'd have to make a blog post about since a) they were some pretty cool nails and b) it was a pretty cool experience. To everyone else; I don't usually post the nails I do in my salon on my blog, so if you're wanting to see more of them follow me on Instagram, Tumblr or Facebook - I regularly update those sites with the photos. 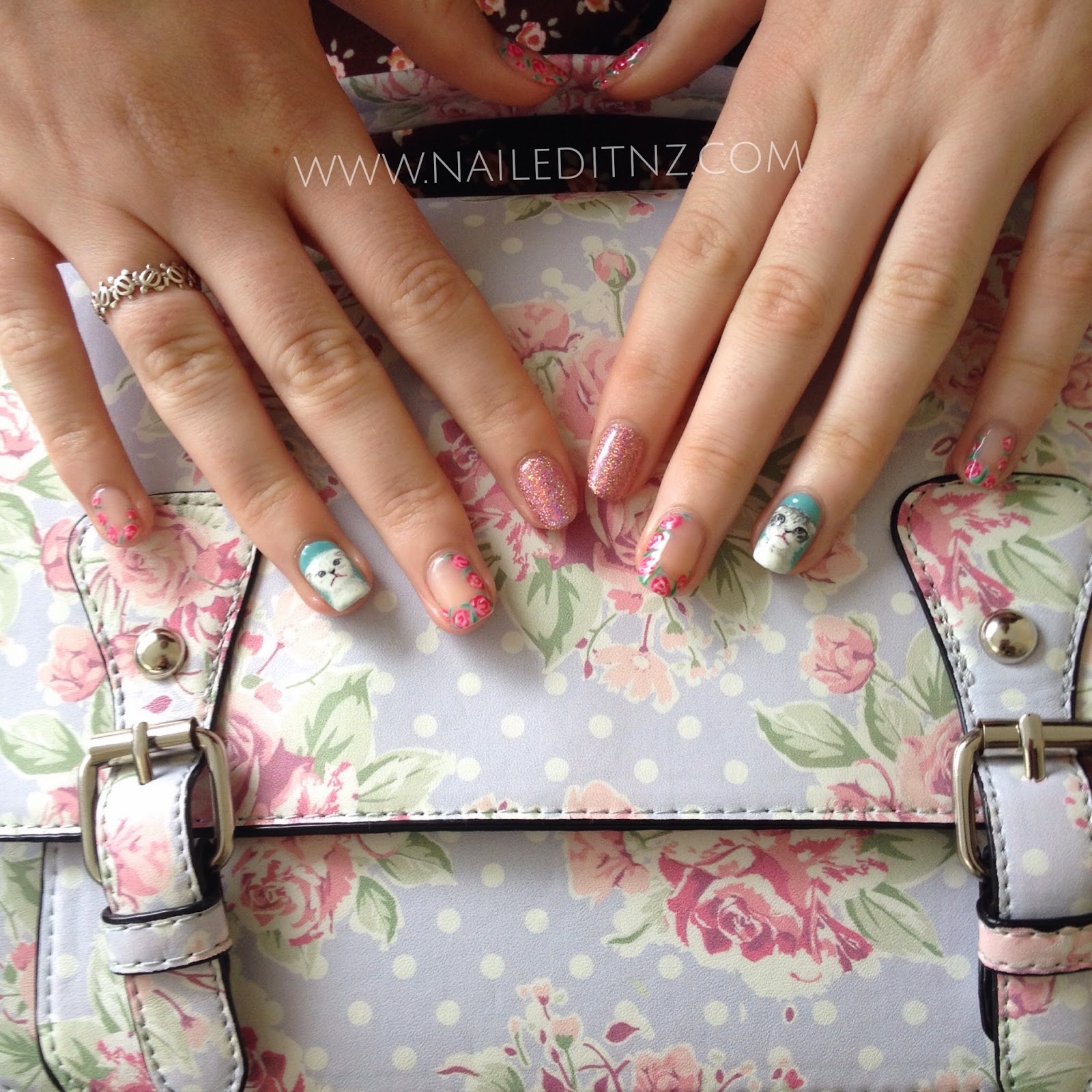 On a side note, I filmed a tutorial today for some Mockingjay nail art! I'm a huge The Hunger Games fan, and did Catching Fire last year, so I figured it was time for an update. I've started editing the video already (my fav thing- not) so all going to plan it'll be up tomorrow or the next day. Keep an eye out for it here!

Hope you've all had a great weekend, and I'll talk to you again soon.
♥