Yesterday I realised there was only ten days until Mockingjay Part 1 came out - cue much excitement! I'm a little apprehensive about viewing it in the cinemas within the first two week of it's release, though. The first two movies were spoilt for me by obnoxiously loud people talking all the way through... I'm going to sound like the movie voiceover, but "please be considerate of your fellow movie-goers!" Considering I LOVE this series and want to fully enjoy the next one, I might wait until the crowds go through before I see it. If I can hold out that long, that is!

I did some Catching Fire nail art when that movie was released last year, and decided to recreate it in a Mockingjay theme for this year. 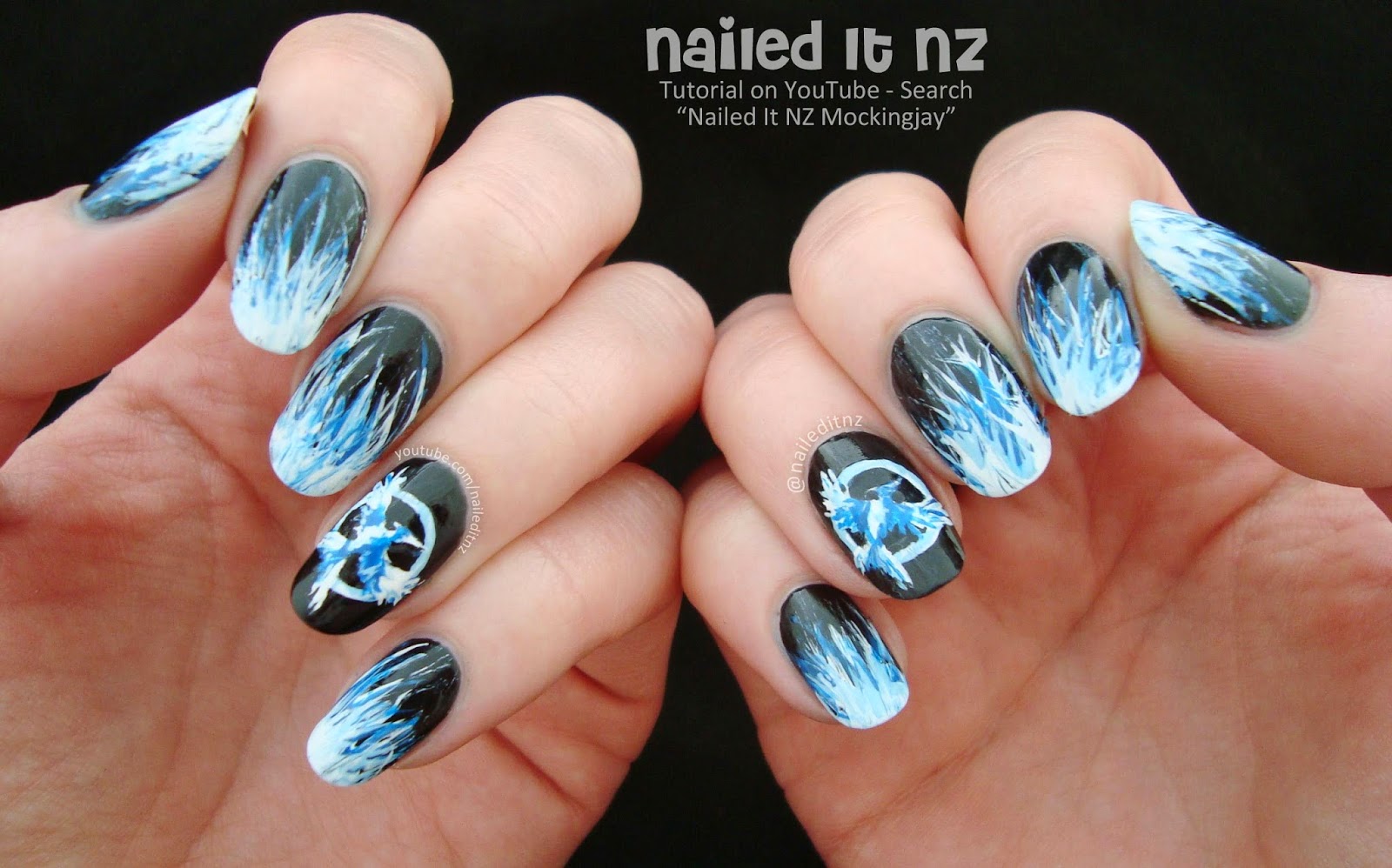 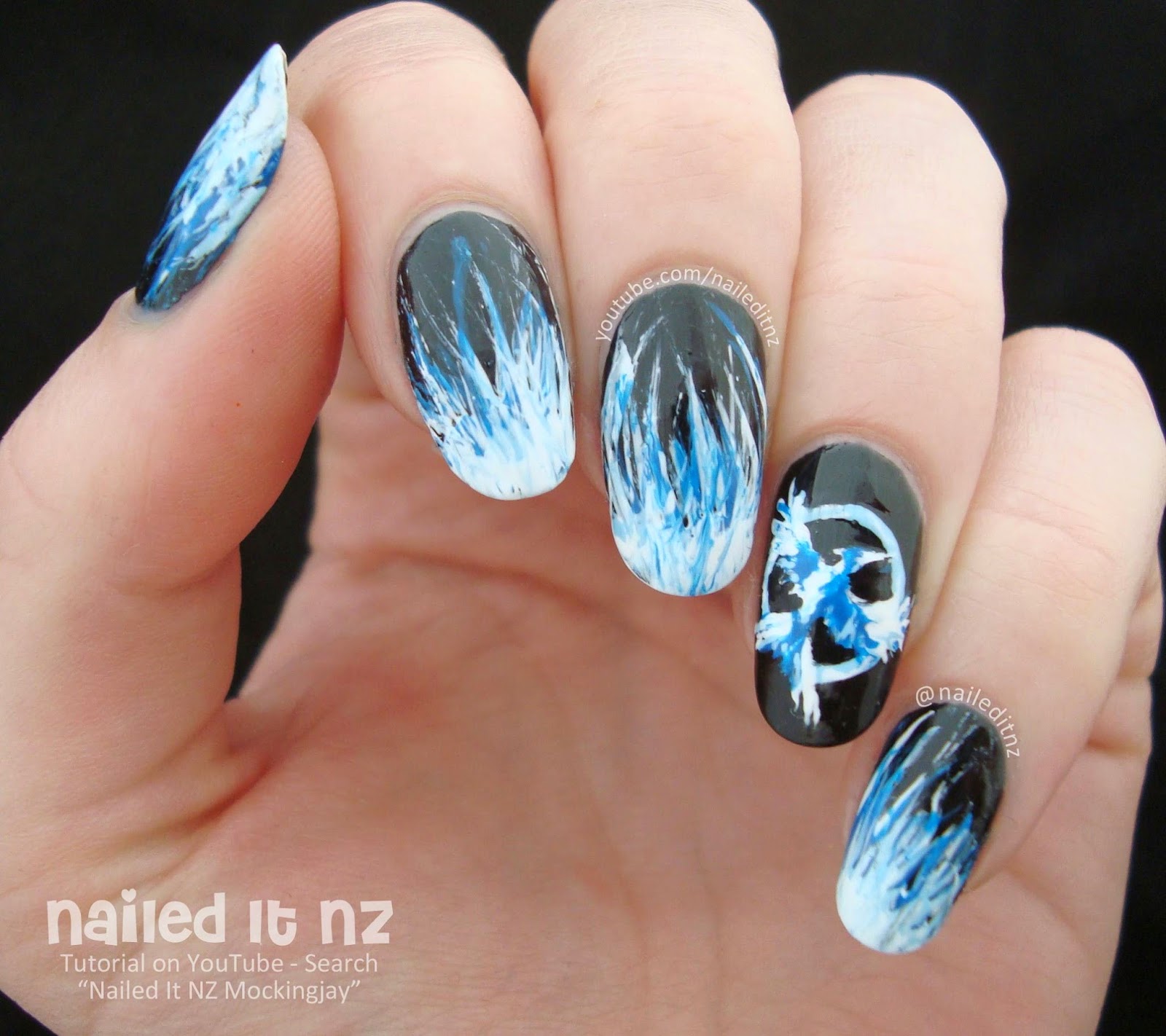 The nail design was blue, as you can see, to match the cover of the third book. I did toss up basing it off the promo images for the new movie, but decided it would be too similar to my old design. A new challenge is always good! I made a tutorial for it as well; here it is, and please subscribe to my channel.

I love the flames - they're relatively easy to create while looking so intense and detailed! I like the symbolism behind the flames turning blue, as well. While the fire started in the second book/movie, the third one is when it really burns hot - the uprising turns into something a lot bigger. 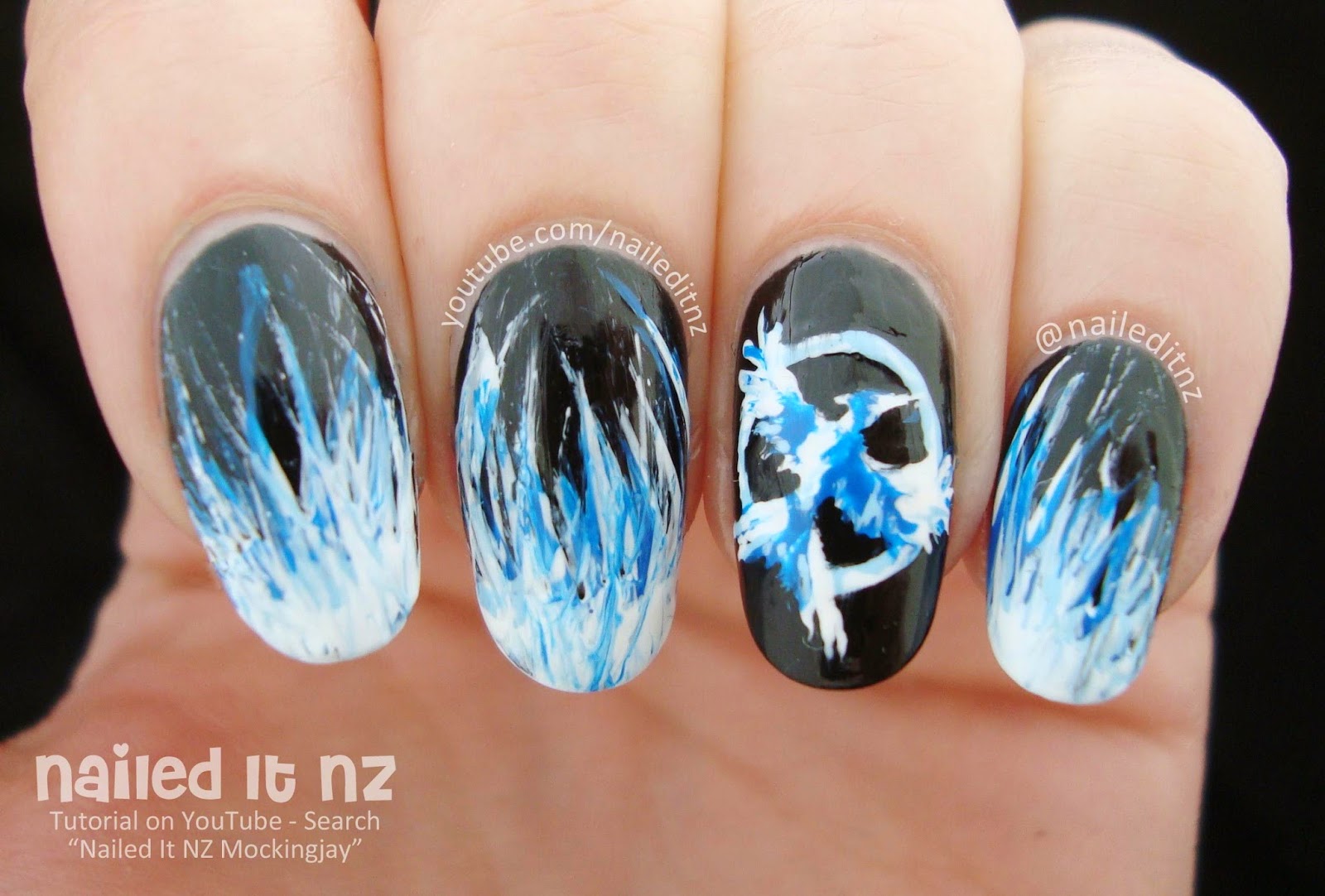 I do wonder if The Hunger Games movies would still be so popular if it wasn't for Jennifer Lawrence being in them? I imagine they would be, but to me it's an added bonus that she plays a lead role. She's such an awesome person! I've drawn her a couple of times in recent months, if you're interested; here and here. 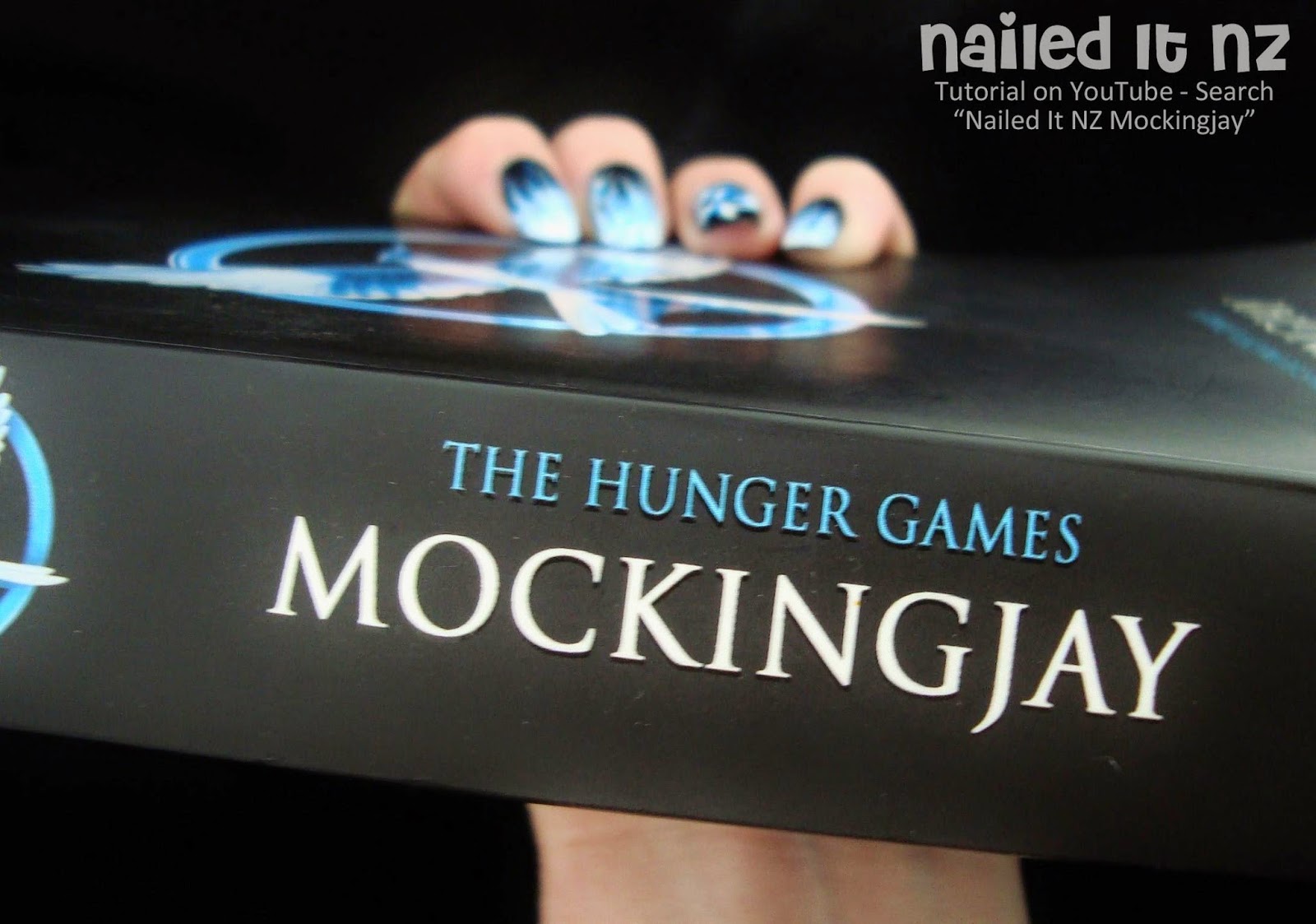 Just looking at these pictures makes me want to drop everything and start re-reading the series. SO GOOD.

I wasn't sure what order to paint the flames on in, so googled a few images to see what I liked. This ended up being a favourite - so vibrant and bright!

I've been experimenting a bit with using Miracle Gel (which I reveiwed a while ago here) as a top coat for normal polish. So far I'm very happy with the results! Normally polish only lasts 2-3 days on me, but with this top coat my Sleeping Beauty/Maleficent nails lasted 5 days before getting a tiny chip. The chip happened after I had had a bath, as well, which would have encouraged it. Pretty happy! I'll let you know how long this manicure lasts. 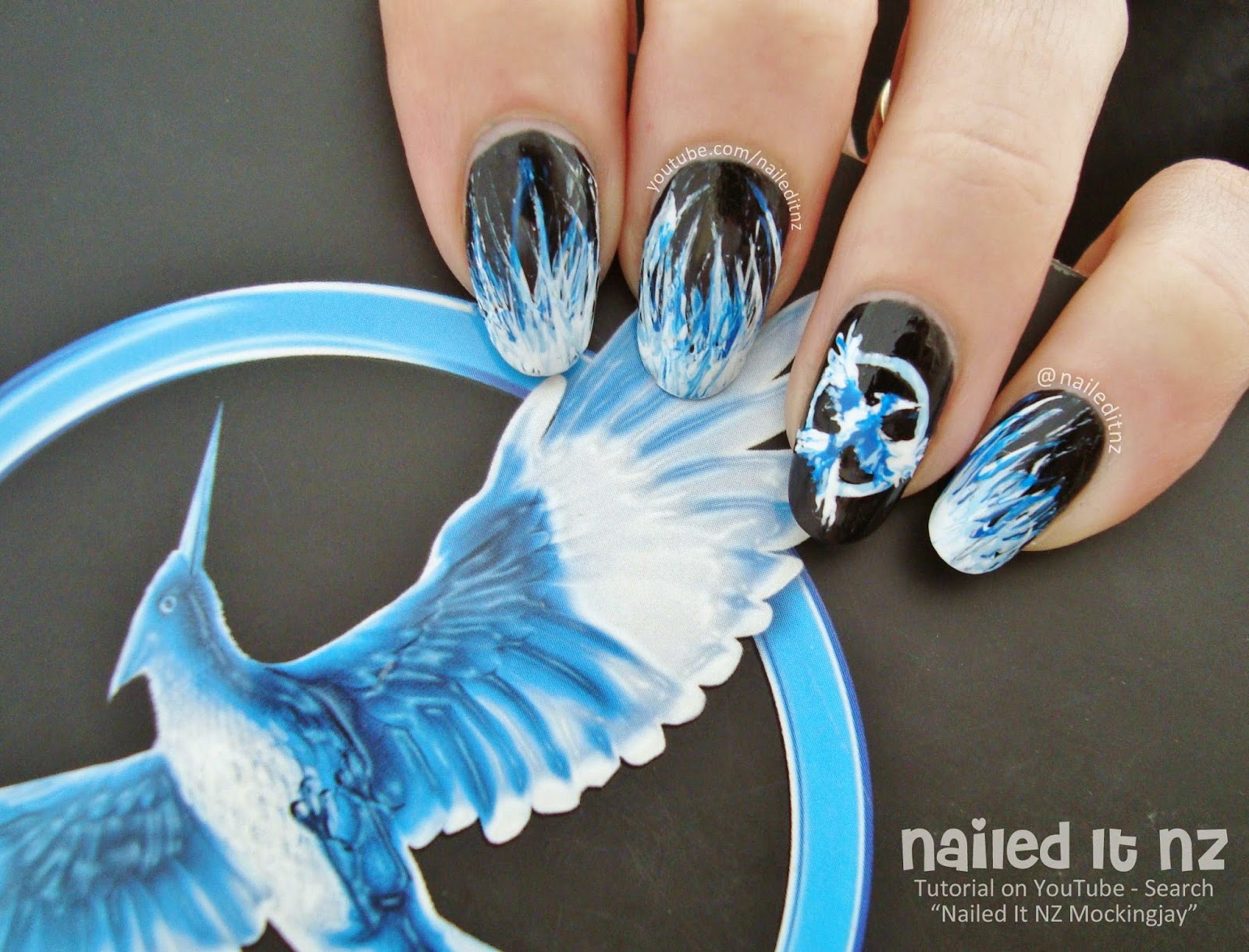 As you'll see in the video, I used a dry-marble technique for painting on the flames. If you're going to try this, you'll need a striping brush and one or two very small brushes. I buy my brushes here, and here's a video on how to cut them down. 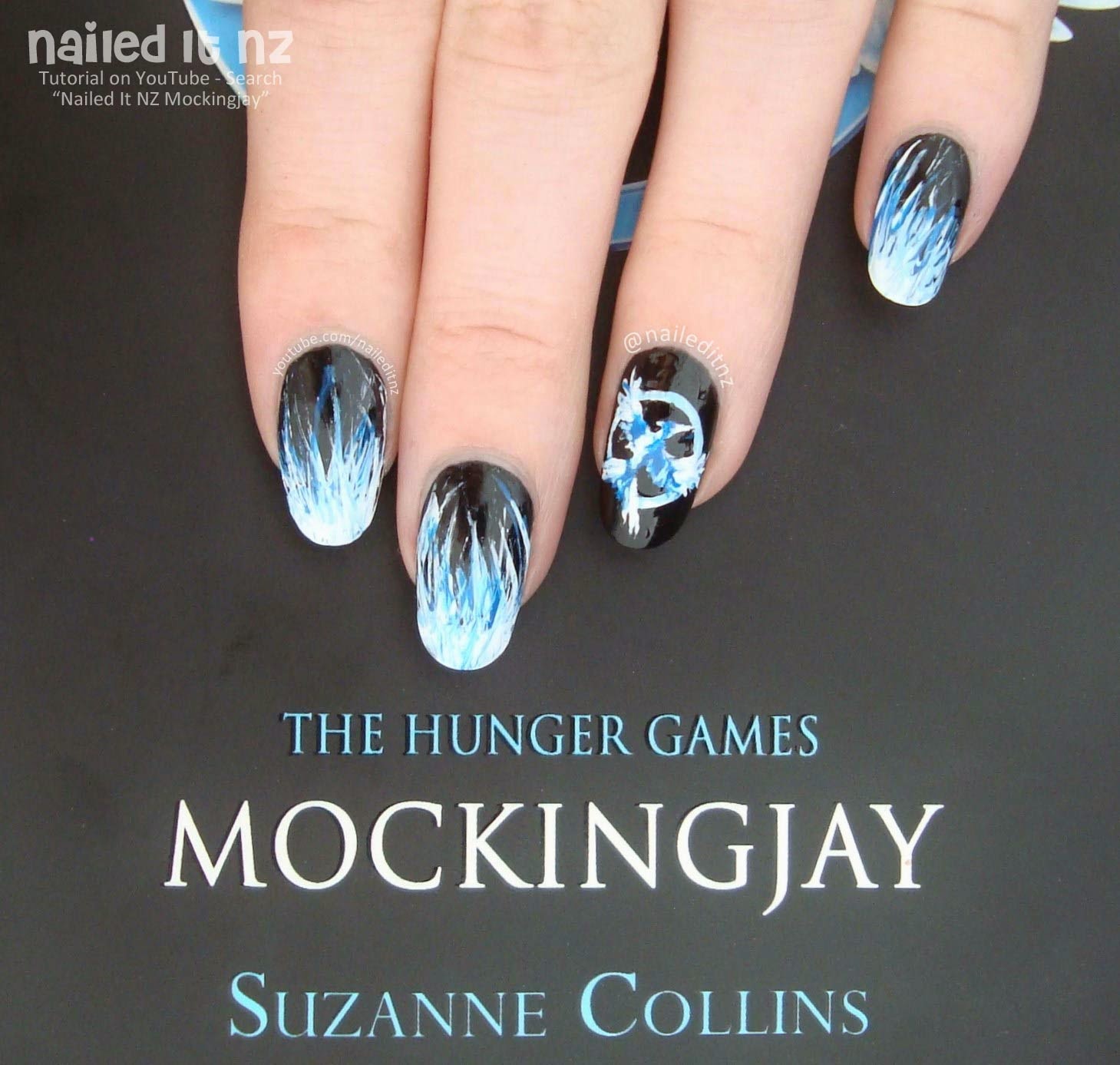 Here's how the right hand turned out - it's always trickier using my non-dominant hand, but I'm getting fairly decent at it! I've got a video about using your other hand here, if you're wondering what my tricks are. I am NOT ambidextrous! 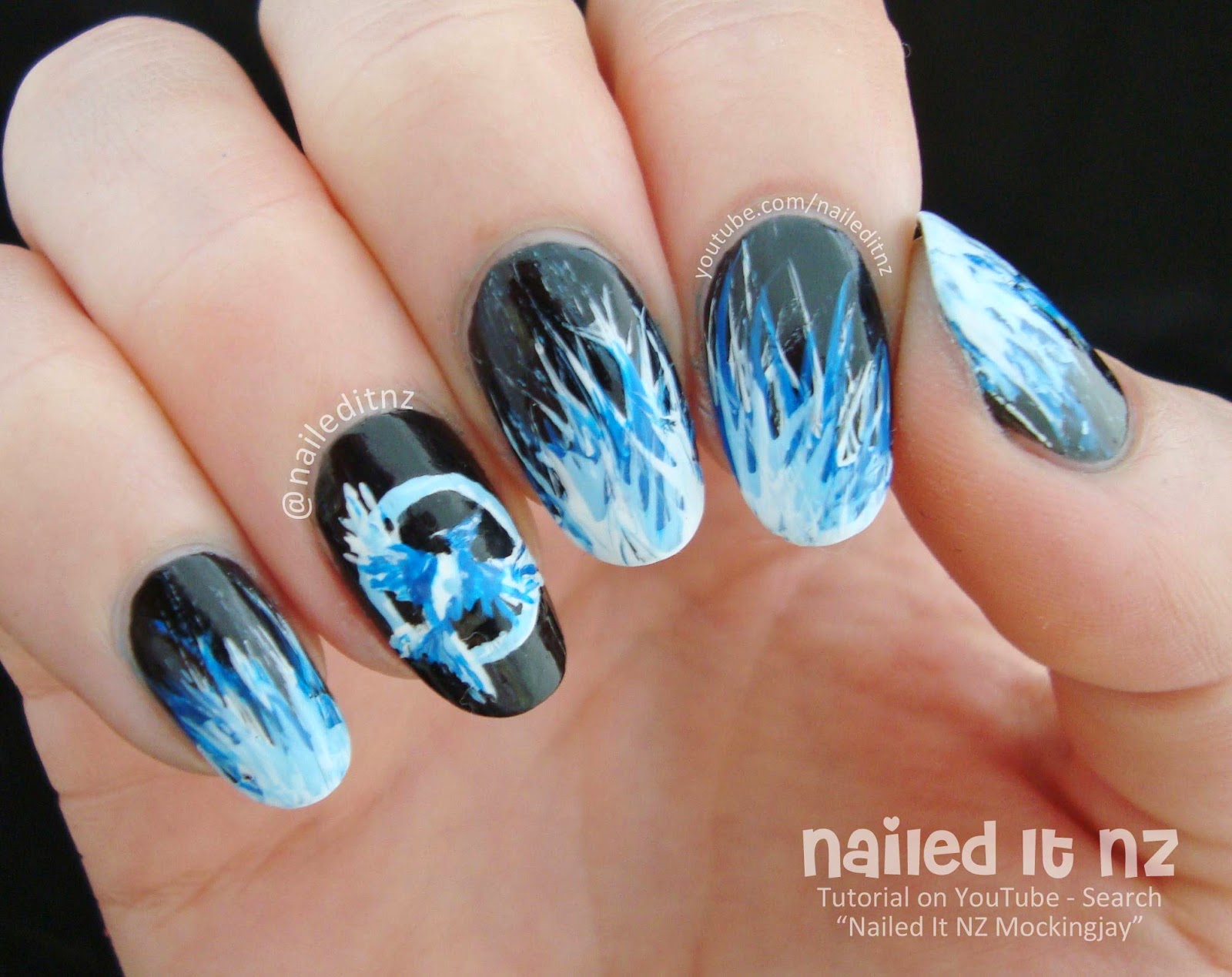 While I love it, there is one thing I would change about The Hunger Games series; I'd have it re-written as an adult's book, not a teen's. While it's an easy read, I'd love to see more detail and spend a longer time going through them. Panem is such an interesting country - I want to know more about the other districts! Wouldn't it be awesome if Suzanne Collins made a spin-off series, with characters based in the "dark days" or a different district? Fingers crossed!

Here's a shot of my Catching Fire nail art from last year - go here to see the blog post about it. 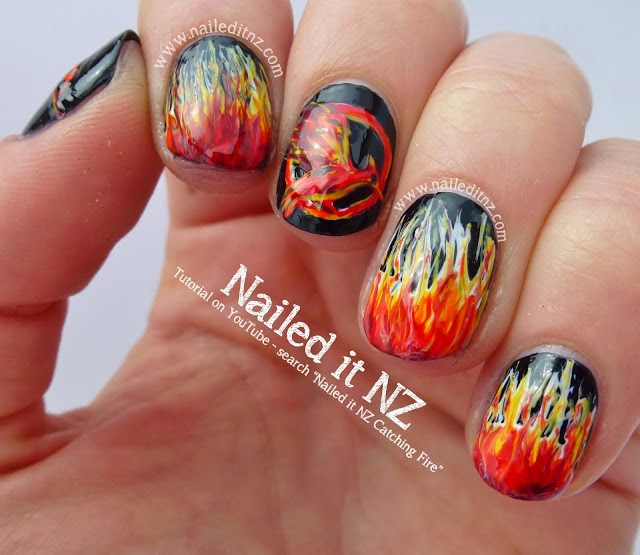 Hope you like today's Mockingjay nail art, and let me know if you're a Hunger Games fan too!
♥