A few weeks ago I watched Maleficent, and absolutely loved it. Angelina Jolie was the perfect actress to play the evil fairy, and I loved hearing the "other side" of the story. I decided to make Maleficent and Sleeping Beauty the next inspirations for my Disney Series. In case you haven't seen any from the series before, in April 2013 I challenged myself to hand-paint nail art based on Disney movies, with the intention of doing each design in as much detail as I possibly could. This is the seventh design, and in the past I've done (in chronological order);

The basic goal of these is to improve my skill; it's very easy to just keep doing art to the same level but I'll never improve that way! I put it off doing these for a while, knowing I'd have to spend a long time on them - and I was right. It took five hours to do both hands, but I'm very happy with the final result ☺. 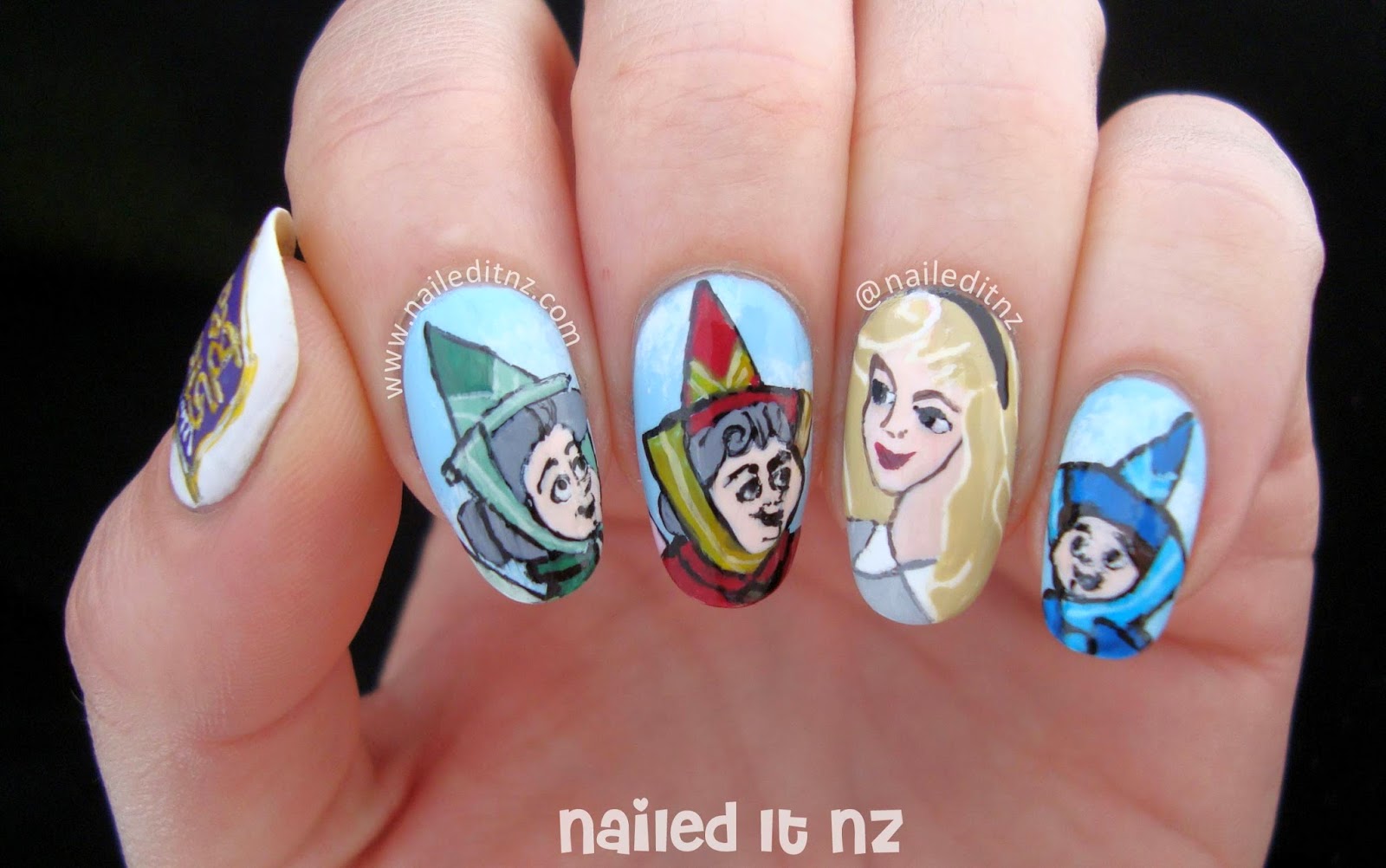 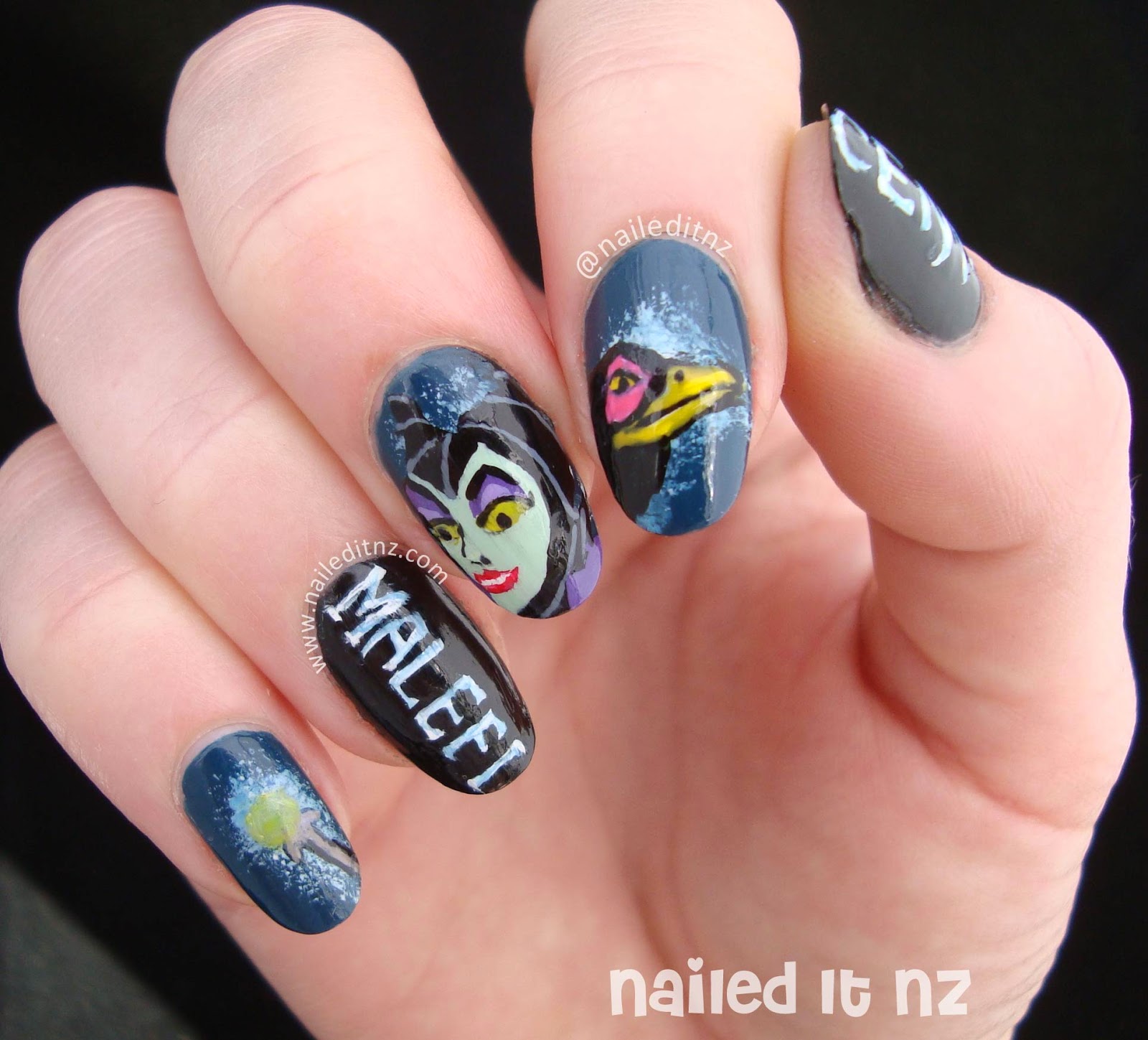 It was a huge process to create them. There was definitely a point when I thought "okay, I'm a bit over this now!" I considered simplifying it by just doing one of the fairies, however let's be honest, the three of them had to be together.

I've made a couple of step-by-step picture tutorials for these nails as well, for those who want to know how I did them, and I'll talk you through what I used as inspiration.

As with all my extremely-detailed nail art, I planned out roughly what I wanted first. In the picture below you can see my left hand, and the bottom circles and scribbles on the paper was my plan for it. As you can see, I leave the details for the nails ☺. I initially was going to do this on my right hand, but realised the Maleficent hand would be slightly easier as there are fewer characters on it - and as I'm right handed there was no sense in making it harder for myself. 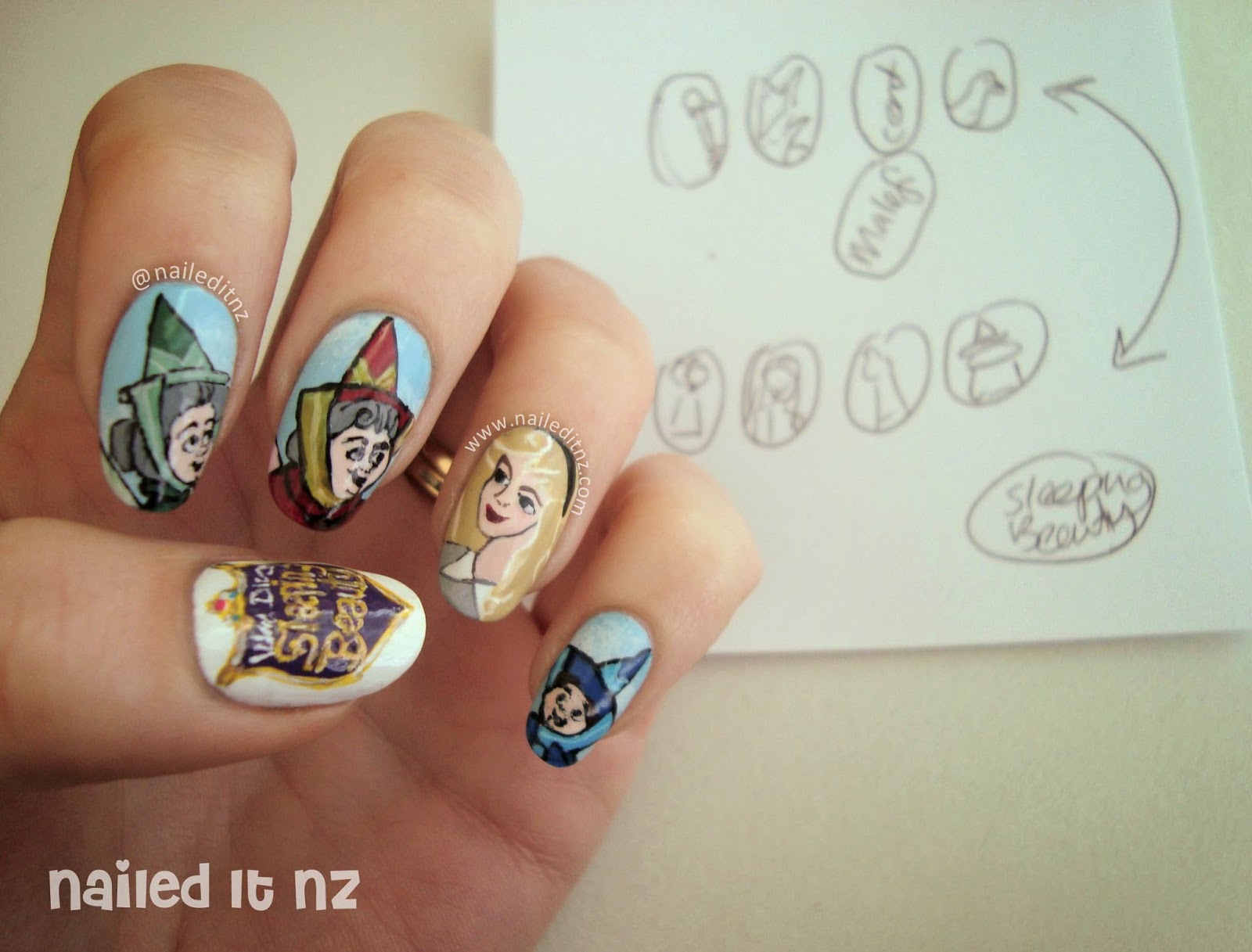 The logo to Disney's original Sleeping Beauty movie was the inspiration for the thumb, and I must admit I was the least happy with that nail out of all of them. The logo was very small and detailed, and the lettering was a very cramped font. I wanted to paint on the actual words "Walt Disney" like I have in previous Disney nails, but it just wasn't going to work out this time.

Still, it's recognisable at least! Even if it does say "Wuir Dies" instead of Walt Disney, haha. 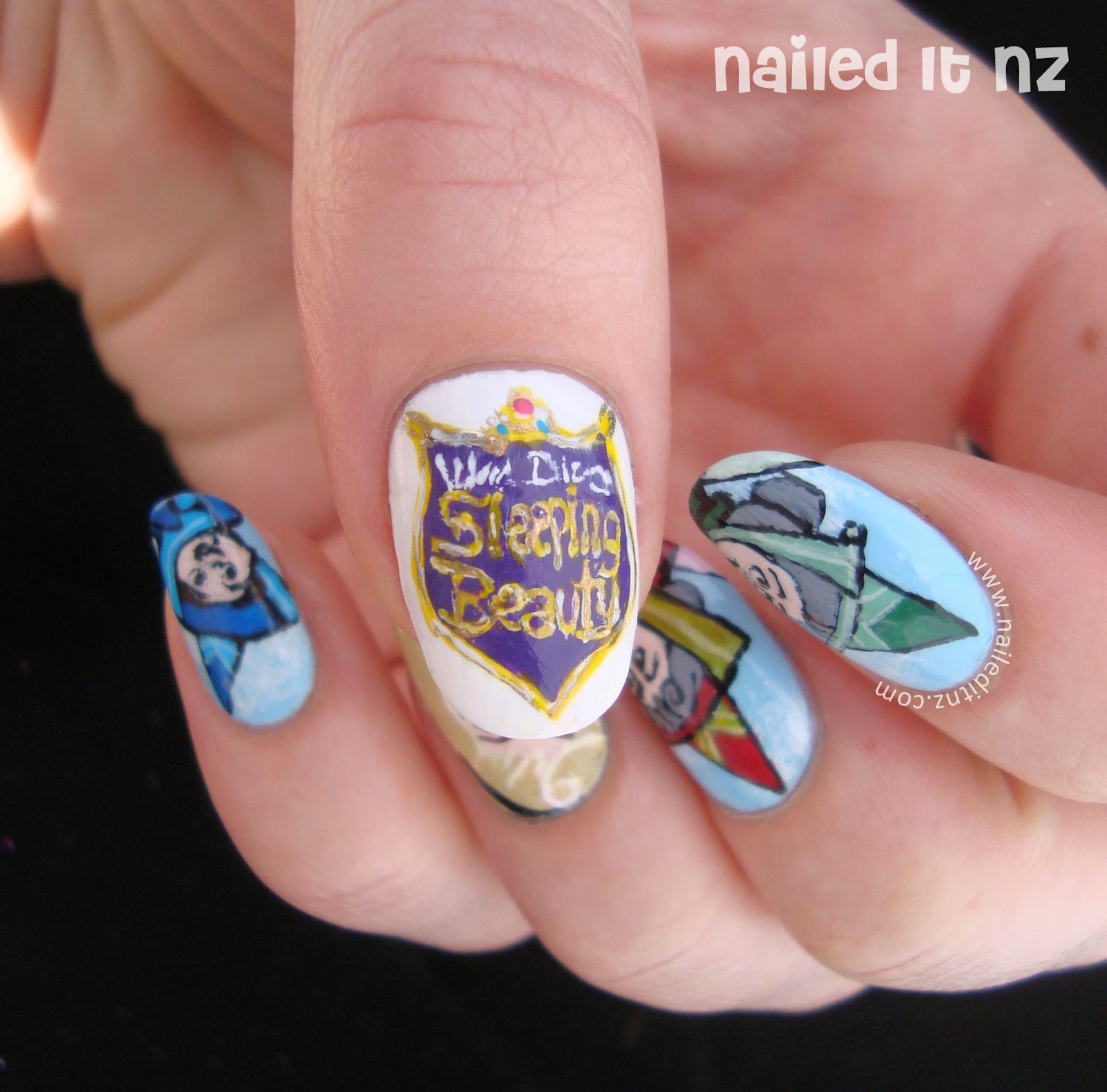 It took some time to choose a inspiration for Sleeping Beauty/Briar Rose/Aurora (seriously, who needs that many names?). I ended up choosing this one, where she's Briar Rose and all very cute in her simple dress and flowing hair. I had a bit of an issue, though - she was looking the wrong way! I didn't trust myself to flip her around in my head, so I flipped it on Photoshop and worked off that picture instead.

I'm pretty happy how she turned out, and her hair was really fun to do! 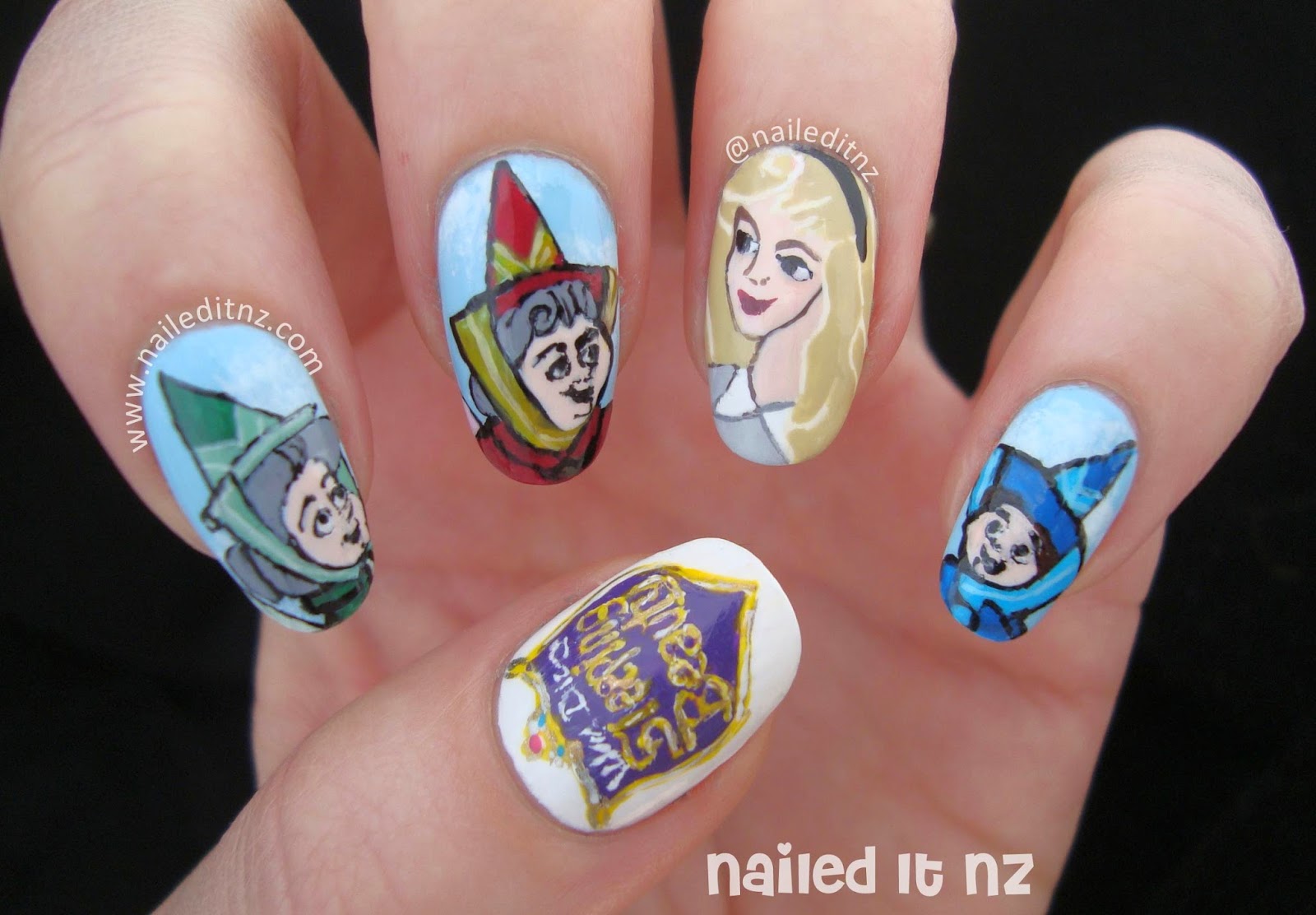 I did the same thing for one of the fairies, Merryweather. I used this picture as the basic inspiration.

But the colours were completely off, so I looked at these two pictures as well to make sure I wasn't going to mess it all up.


As you can see, I placed Fauna on my index finger. She turned out the best, easily. I found painting on the facial detail very tricky - the whole space I had to work in was about 0.5 cm square!

Flora went on my middle finger, and while she looks a bit rabid I was happy enough with how she turned out.

Merryweather was a nightmare - I kept messing up the black, then messing up the white, then the skin colour... ugh! I ending up having to settle, otherwise I'd end up with a raised lump on that part of the nail and it STILL wouldn't be right. 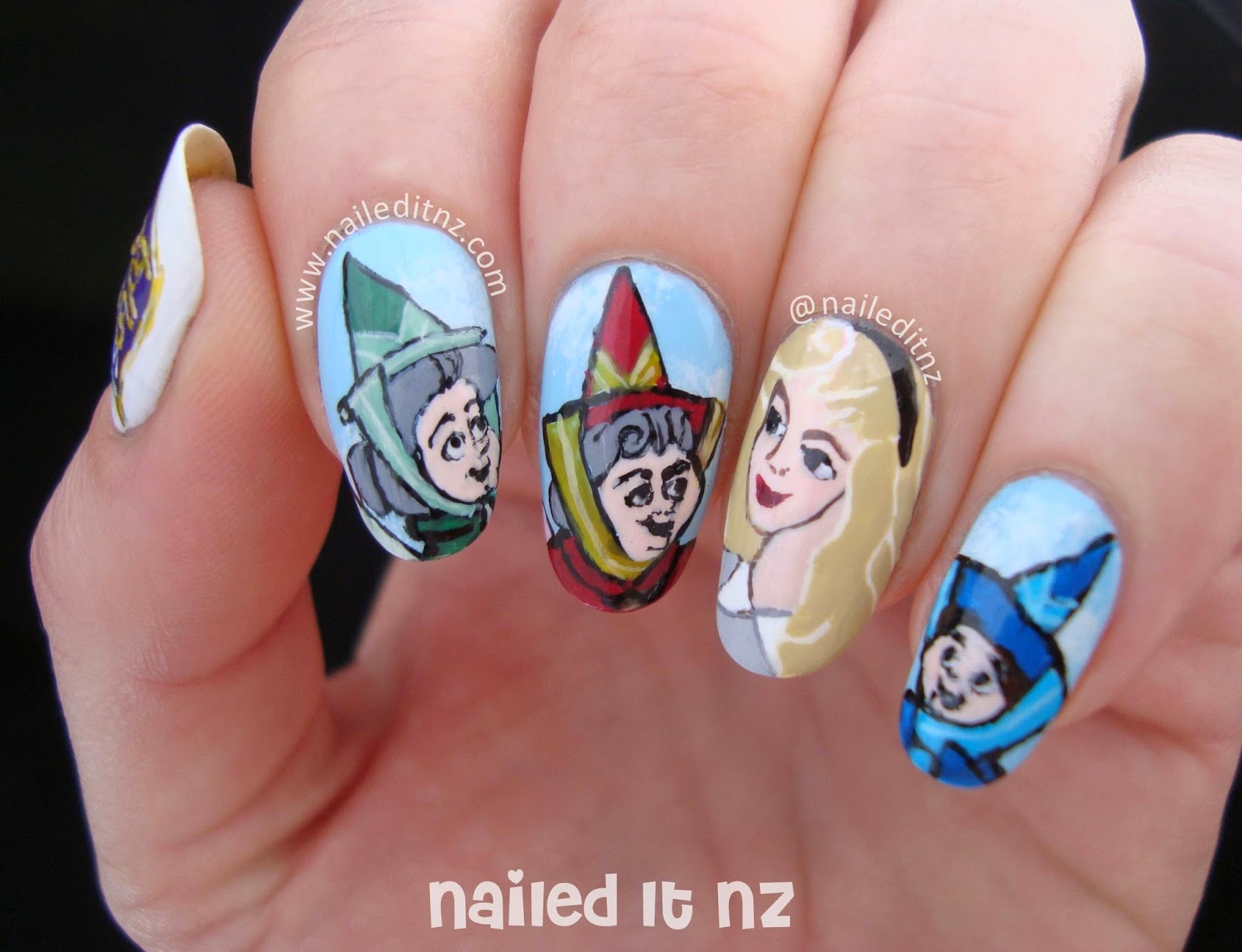 I considered filming this, but I wasn't keen on the idea of having a camera bulging in my face for five hours. Plus my best work is always off-camera, as I have more freedom to move my hands. My Frozen nail art tutorial on YouTube is good at showing the basic way I do all these designs anyway. I took pictures along the way, and created this picture tutorial out of it!

So that's how I created the Sleeping Beauty nails on my right hand - now I'll show you Maleficent on the left. 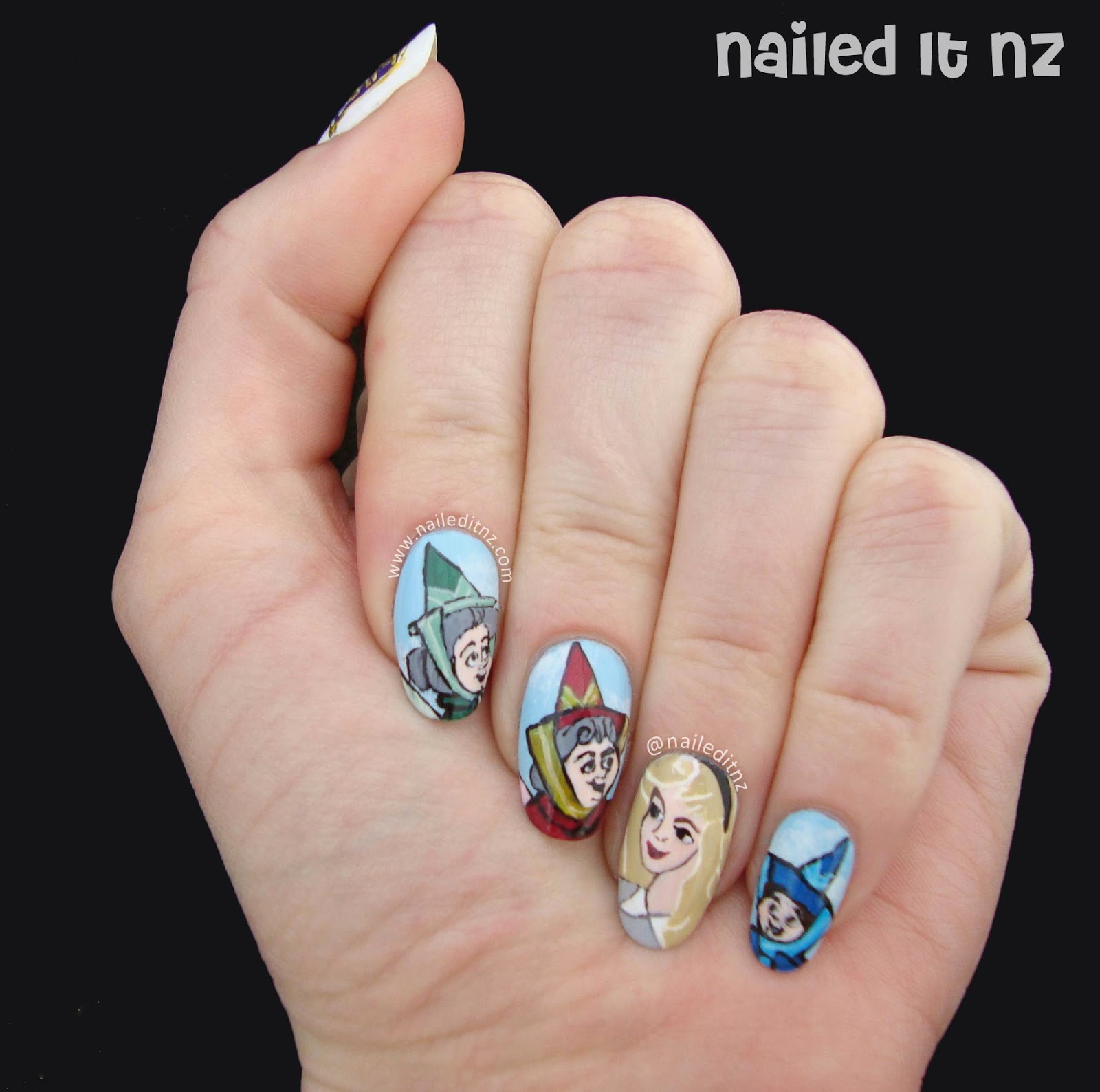 As with the other hand, I made a plan first. I did end up changing it slightly once I started painting, but to be honest that was accidental. 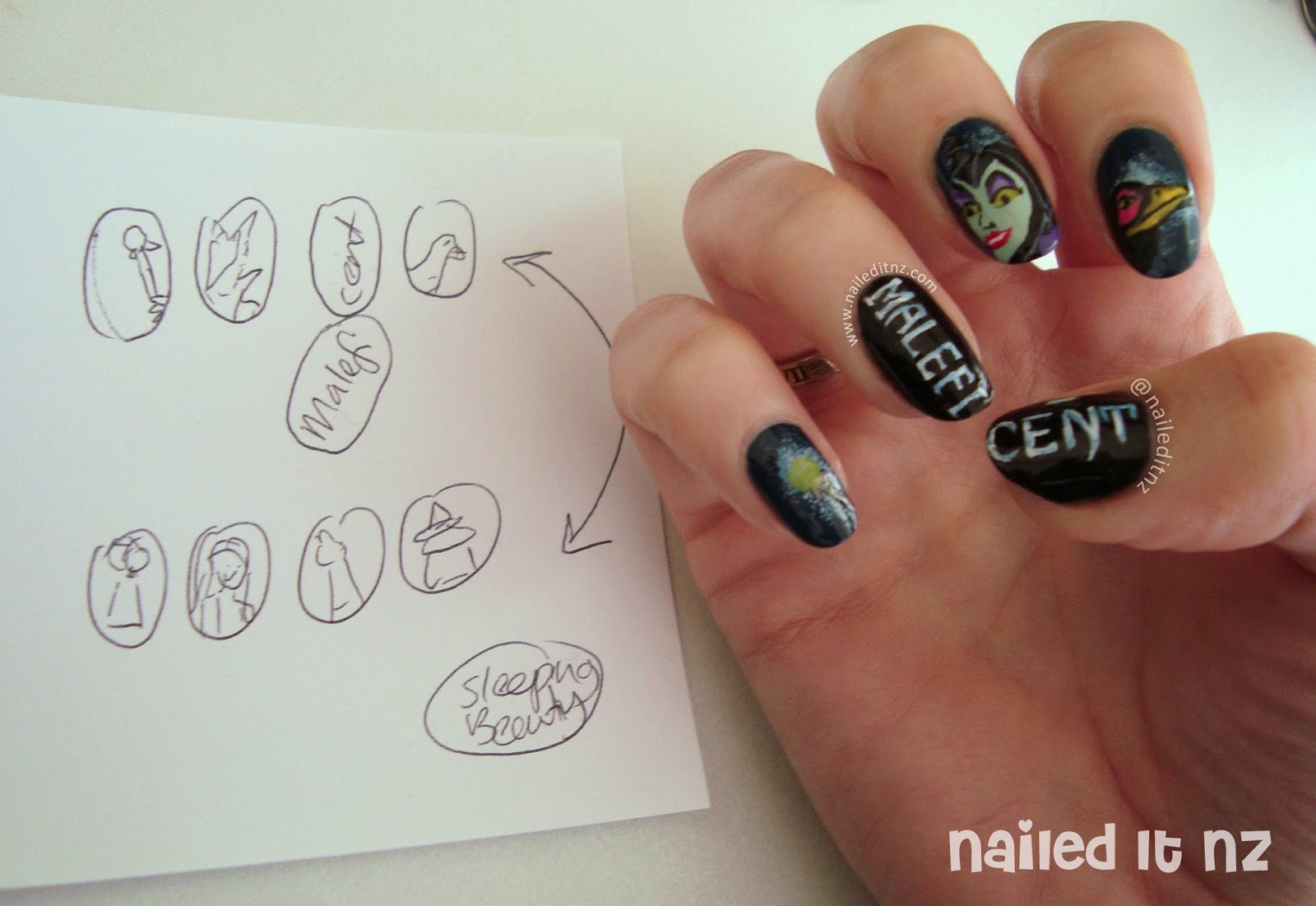 I painted "Maleficent" across my thumb and ring finger, using this picture as inspiration.

Then this picture of Maleficent inspired the rest of my nails. I felt a bit bad using cartoon Disney as inspiration for this - in it she's pretty much pure villain, while in the recent Maleficent movie you can totally understand her reasons to be angry. Such an interesting, conflicted character!

I'm pretty happy with how this hand turned out. 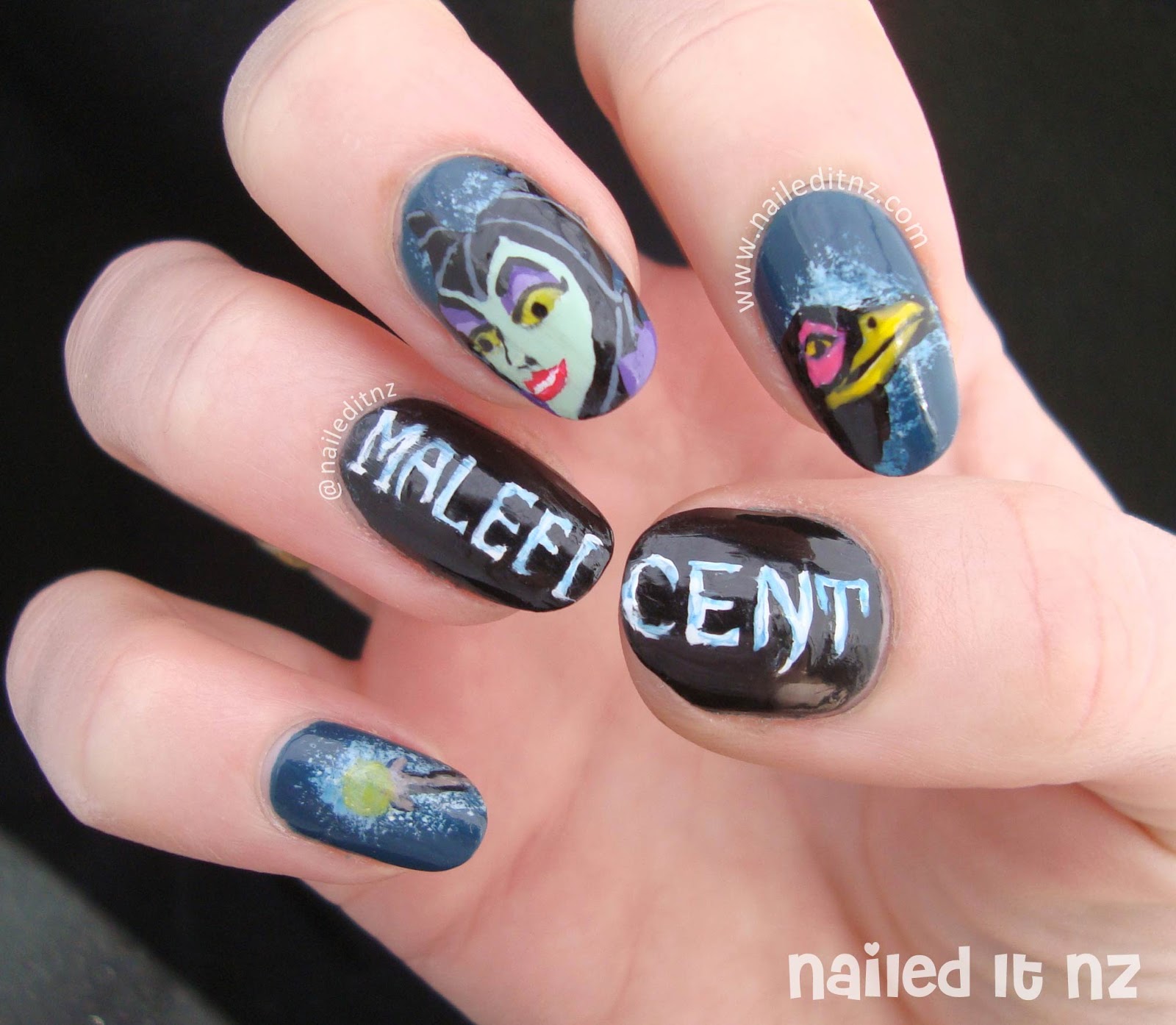 Here's the picture tutorial I made for this Maleficent nail design. The last couple of steps take the longest, that's for sure! 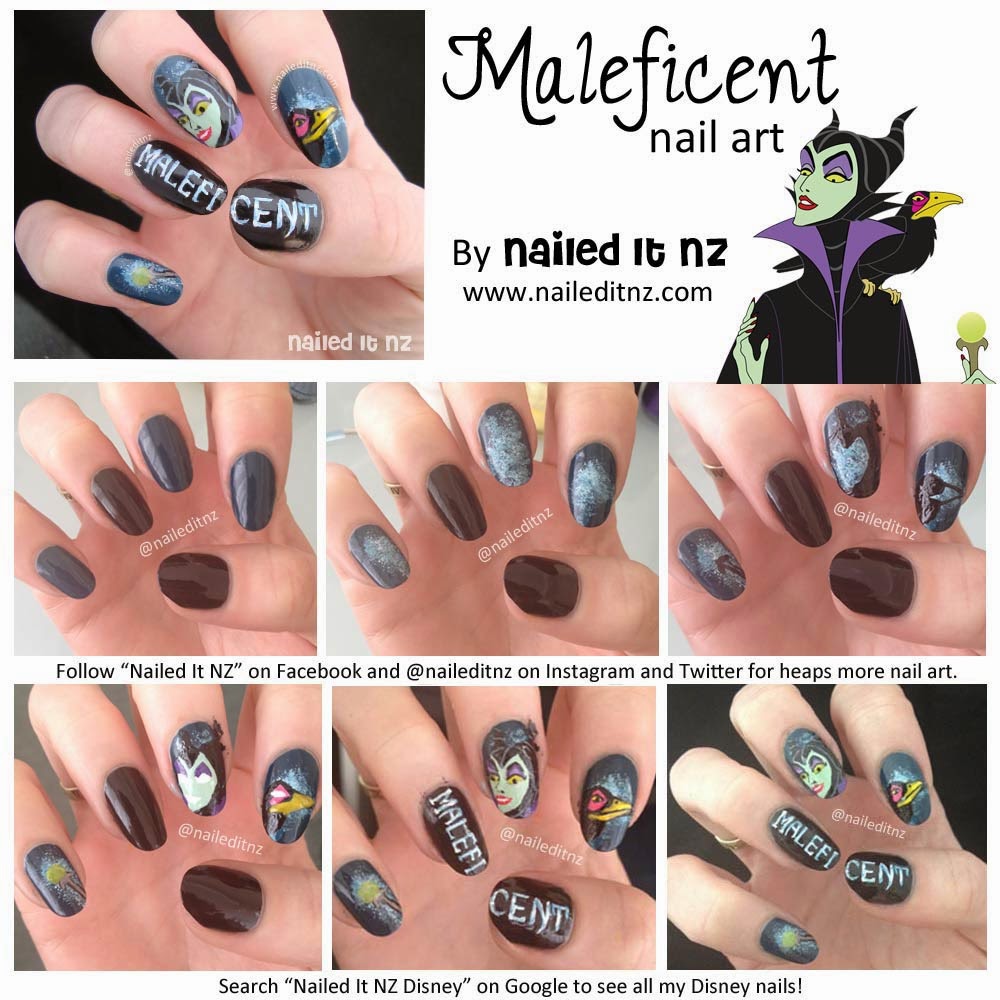 And here's a final shot of this hand. 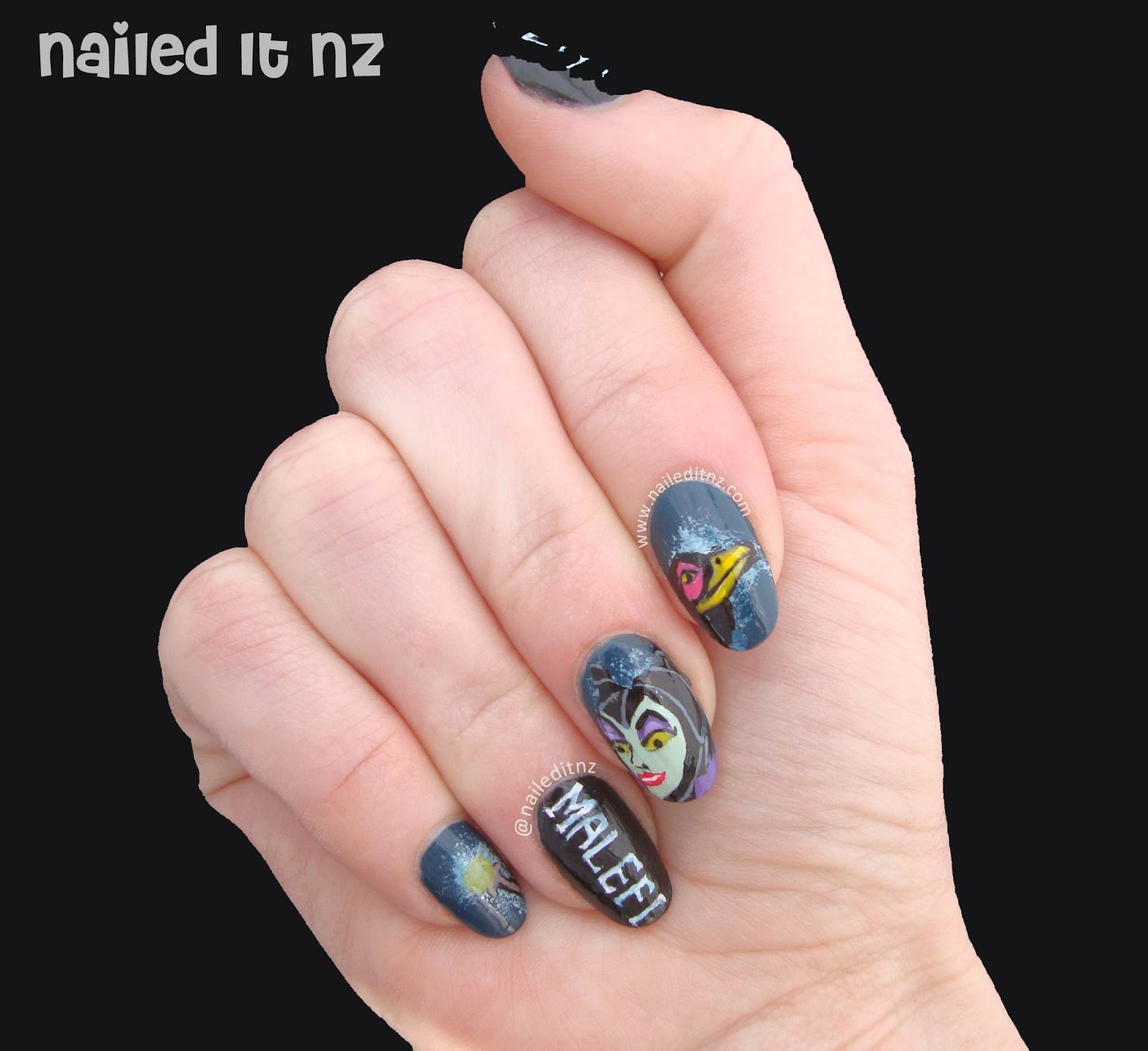 Alright, so want to know all the polishes I used for this? HEAPS! I sometimes use acrylic paint for Disney nail art, but not this time. The metal palette you can see in the photo below was covered twice from all the drops of polish I used! 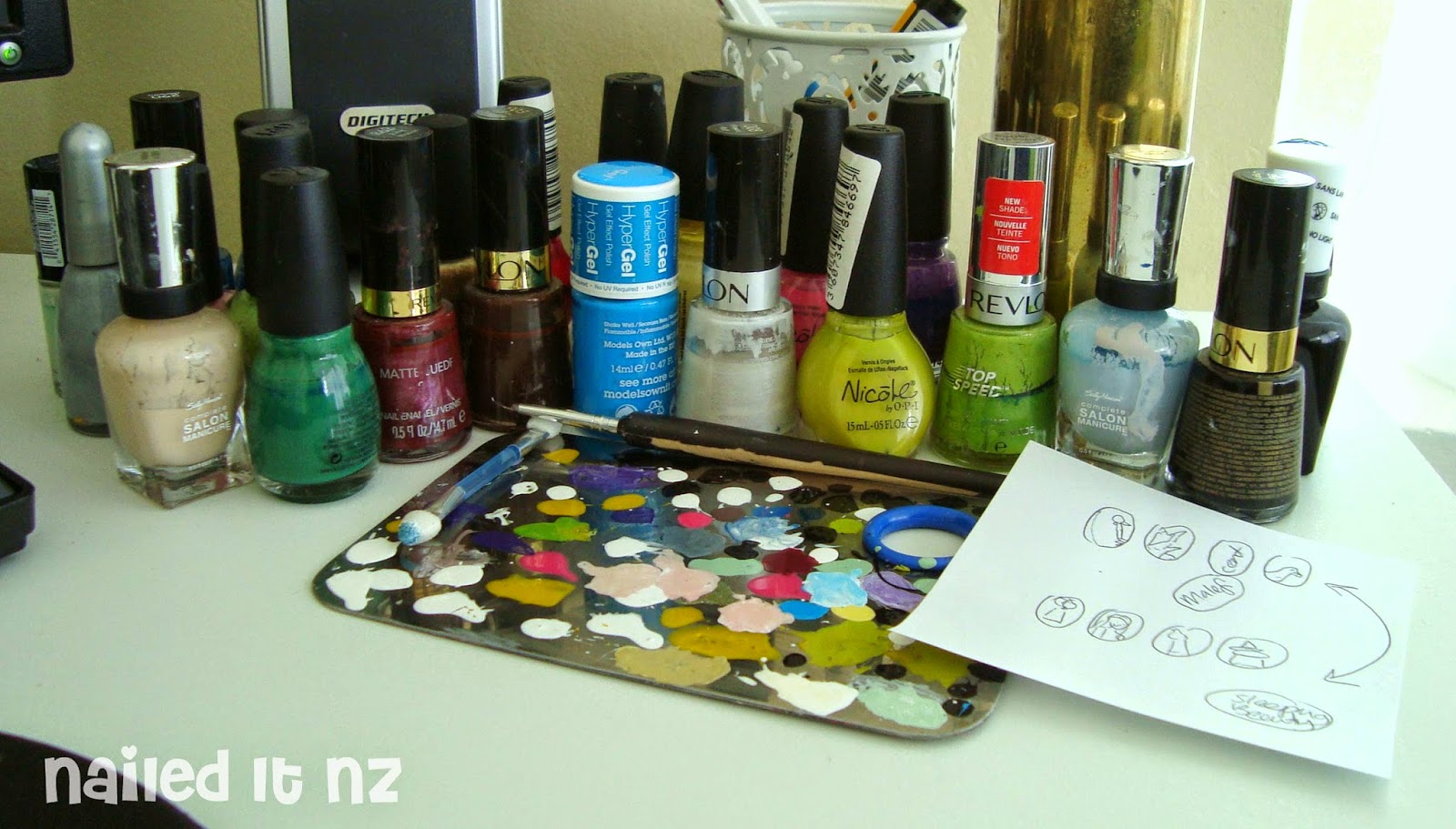 
My base coat was First Base by Essie, and I topped the whole manicure off with the top coat from Sally Hansen's Miracle Gel. Hoping that'll help it last longer!

I just did a count up, and including top and base there were 26 polishes used in this design... Wow. 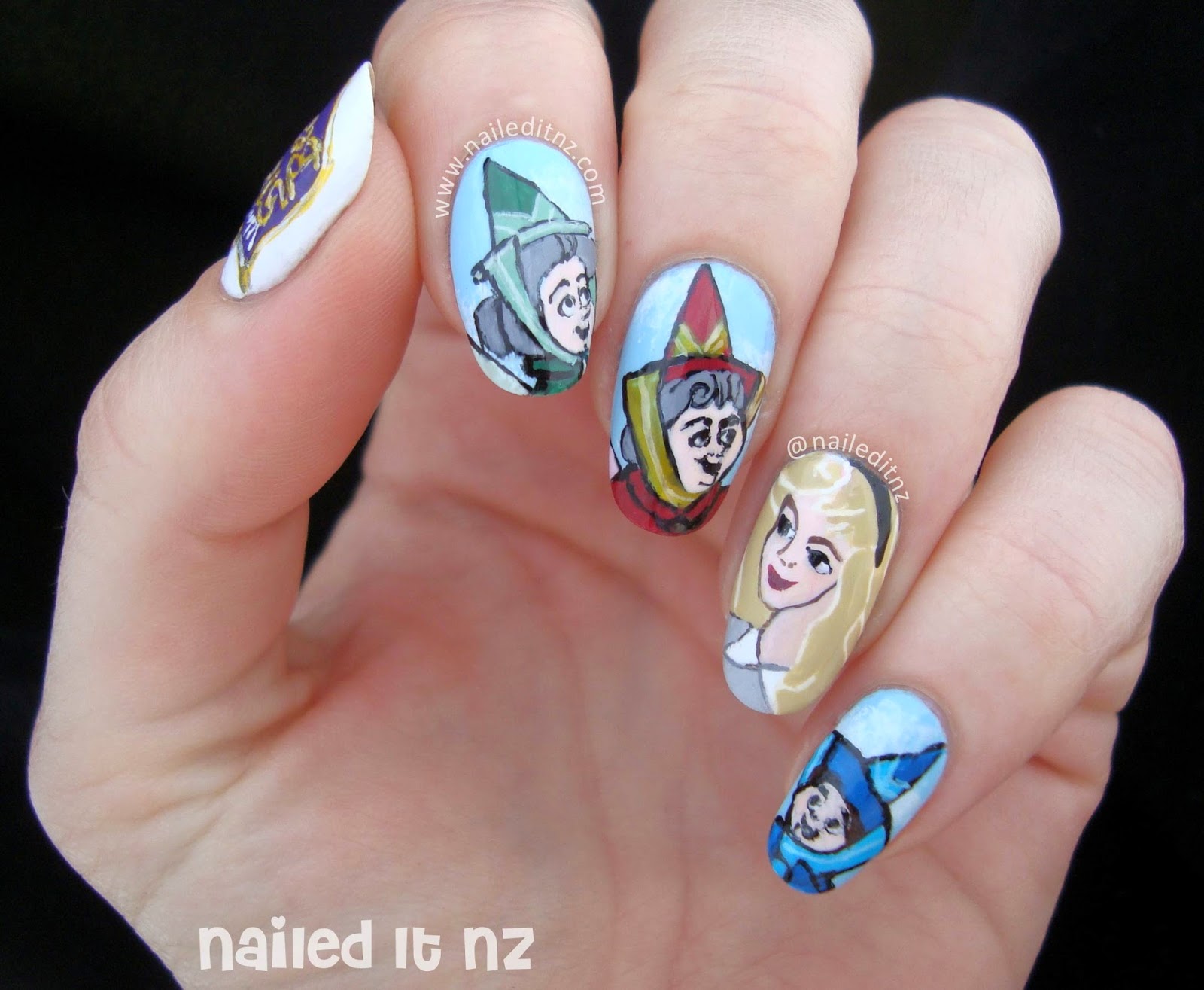 Overall, I'm happy with my progress with Disney nail art. I'll have to start eyeing up what to do for my next design - Snow White's well overdue for an appearance, I think!

Let me know what you think, and I'd love to know what your favourite nail is. Mine's probably Briar Rose, with Maleficent coming in a close second.
♥