This video was a bit of an emotional journey to film and edit. The whole time doing so, all I was thinking of was Ness, the lady who I wrote about in this blog post last month. She died on the 26th September, six days after that post. I didn't even know her personally, but it's just so tragic I found myself verging on tears a few times while putting this together. Sometimes when people die, there is something of a silver lining to it; they were old and their body and mind were starting to deteriorate anyway, or at the very least they went fast...
With Ness, there was no silver lining. It was just awful, tragic, unfair.

This tutorial's a bit all over the place (well, it feels like it to me) so I apologise for that, but I wanted to make sure Ness got a proper mention. It made me realise I need to have a look at a lot of different causes, too, and decide which ones I'll choose to openly promote through my nail art. In the last few years I have managed to get myself a wee bit of attention in cyberspace and it'd be a waste if I didn't use it wisely. Breast cancer's an obvious one to do as it's so common and widely publicised, but I'd like to raise awareness for conditions that aren't as well-known - mental health will definite make it's way in there at some point, that's for sure.

Anyway, here are the nails I did for today's tutorial. 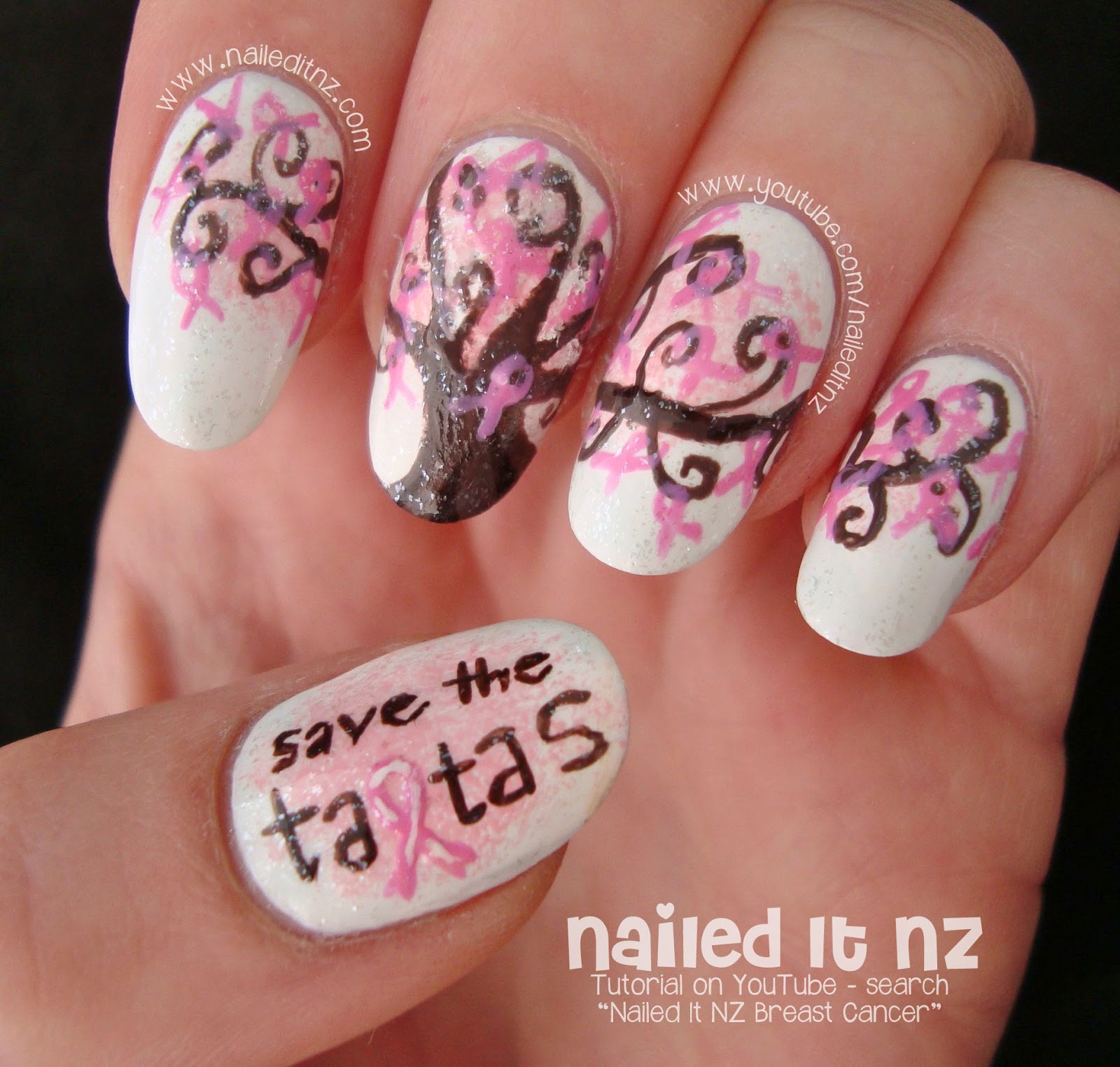 And here's the video for them. Please subscribe to my channel ♥. 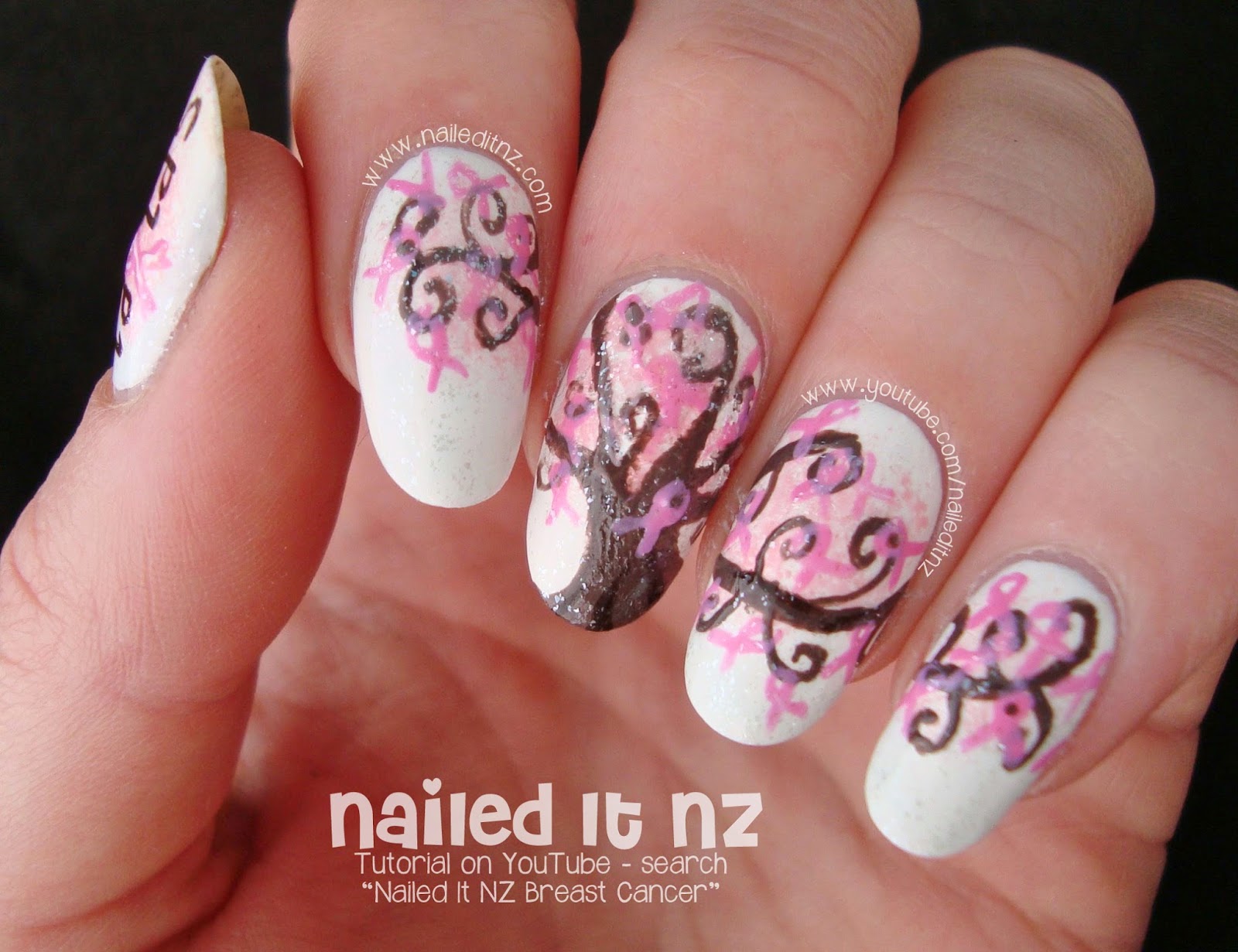 Here's a close-up of the thumb nail, with the phrase "Save the Tatas." 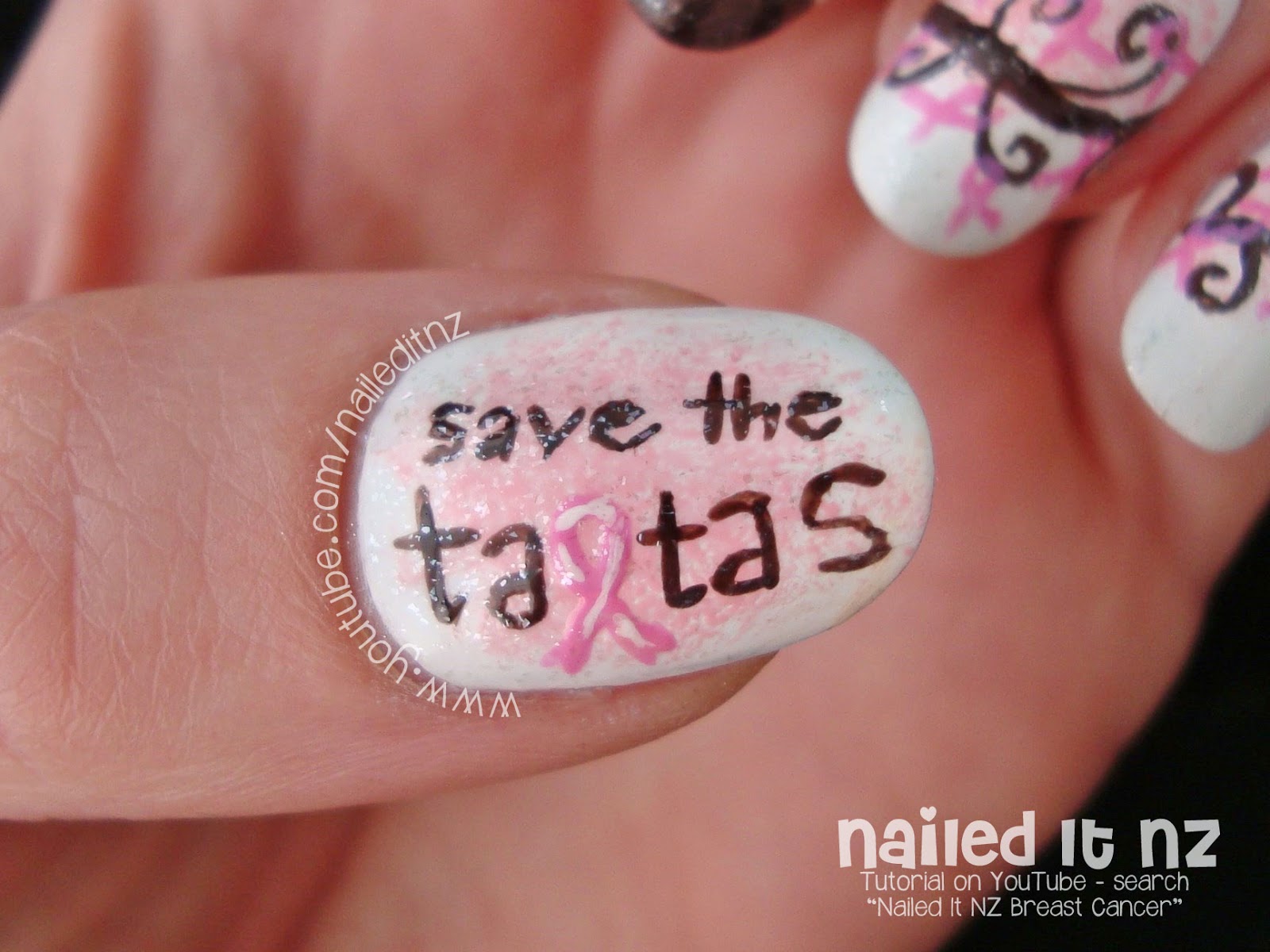 It was inspired by this picture, which I found here. 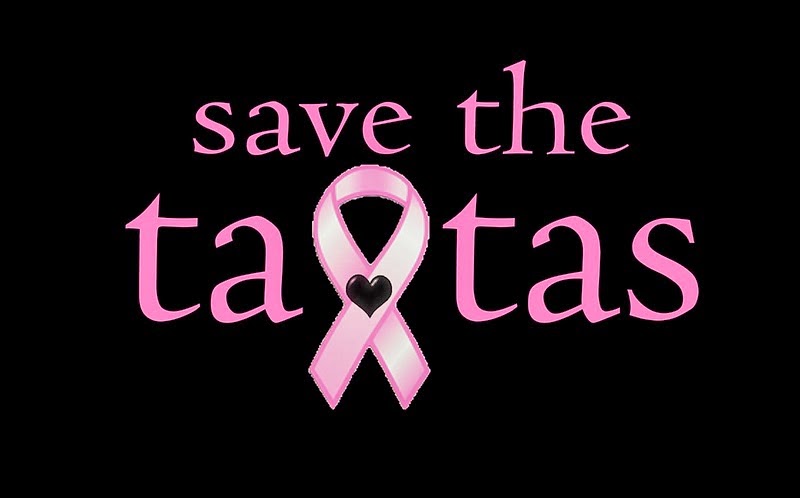 It wasn't hard finding inspiration for these nails - there are many beautiful, artistic works related to Breast Cancer! Here's the tree that inspired the rest of the nails, which I found here. 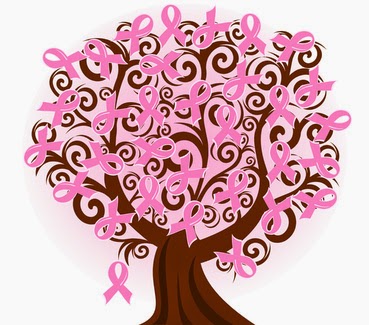 I filmed this tutorial on a day that I was doing a big filming session - three videos in a row. On these days I'm pretty brutal with what I do - as long as I've got a photo I'm quite happy to wipe the slate clean within 5 minutes of completion. That was the plan for these ones, however I forgot to take a photo first!! Thankfully I had only done one wipe of the middle nail when I realised, and promptly freaked out and fixed it up. So if the middle nail looks slightly different in the photos than in the video, that's why ☺. 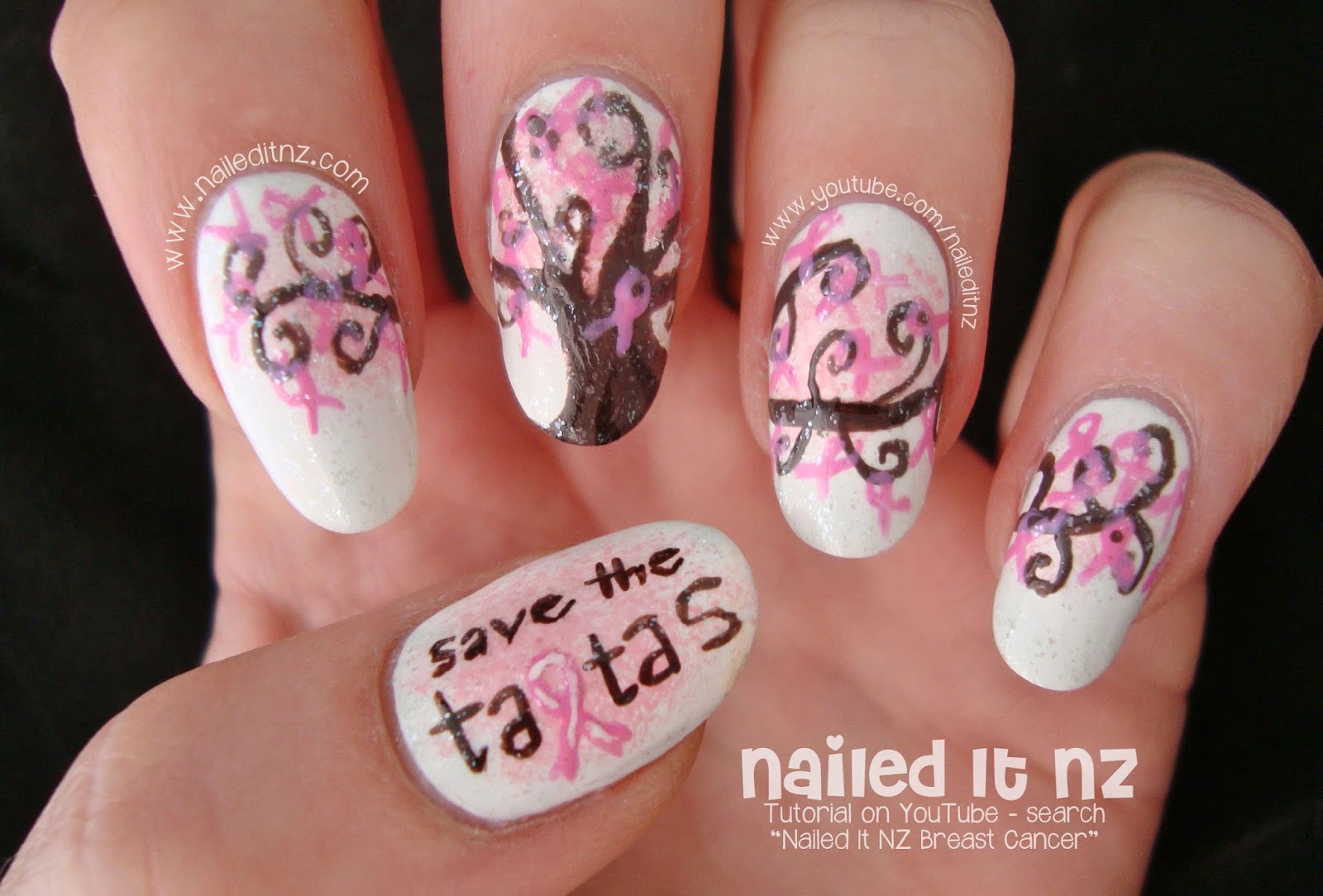 I did Breast Cancer nail art last year as well - you can watch the tutorial for these here, and read the blog post about them here. I think I actually like last year's design better! 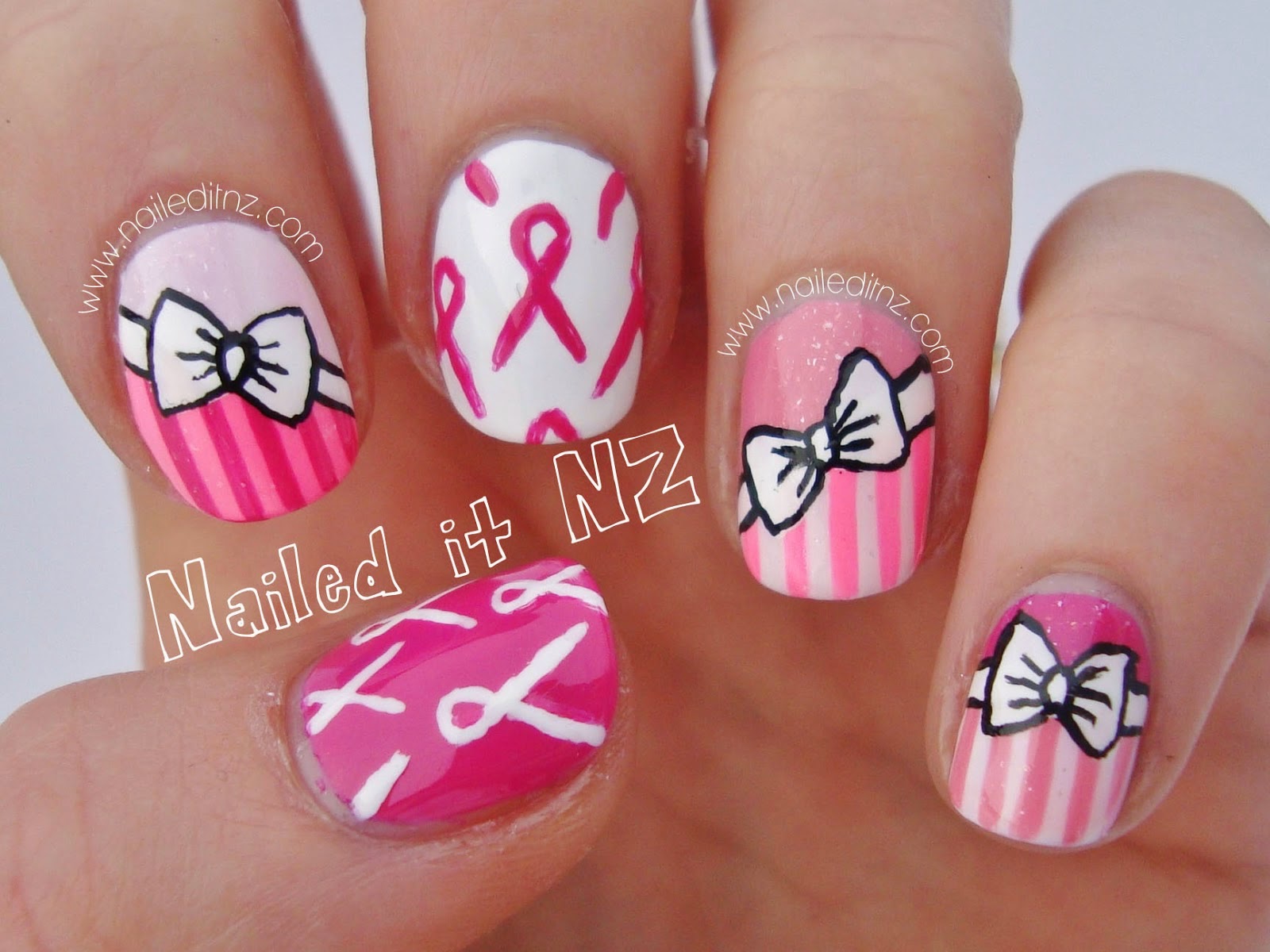 Here are some useful websites about Breast Cancer. The first two are New Zealand ones, but the third is an international one.

I hope you like my latest Breast Cancer Awareness nails, and I hope you're having a happy, healthy day.
♥