Something that I didn't anticipate before starting my course, was that I was going to have to re-learn nail art. Gel polish is completely different to normal lacquer. I already knew that acrylic paint and nail polish (my usual options for nail art) behaved differently - nail polish has a tendency to pool and spread out, while acrylic paint stays where it was put. Gel polish - well, that's a whole new ball game. I love it... but I hate it. I've spent 2 and a half years familiarising myself with lacquer, and I was shocked when I went to paint some gel polish roses on a friend and it pooled everywhere! 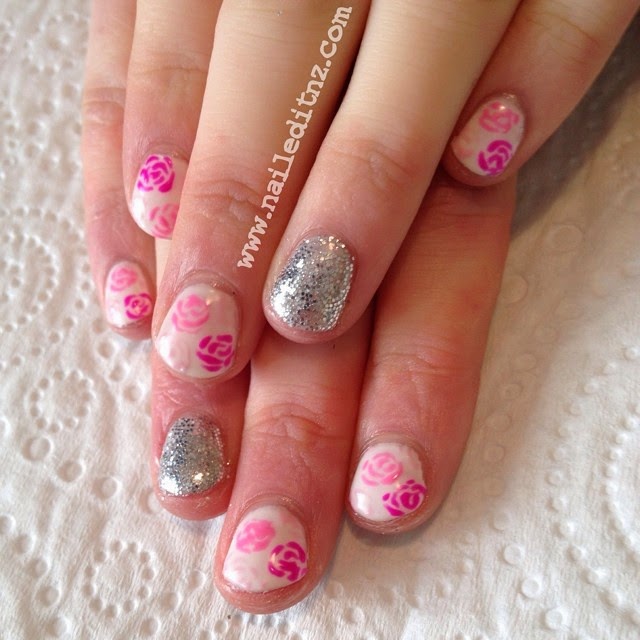 And that was just the beginning...

Okay, the final result was fine but if you look at the middle nail at the bottom of the picture you'll see what I'm talking about. One of the roses is kind of blobby and blurred. That's because gel polish melts. It spreads. It pools. And this was quite a shock to me. On top of that, there are a million new techniques I need to learn - nothing is that same! I need to remove the tacky layer here, buff off the shine there, apply glue in other places... and what was that first one again?

There are other things you need to keep a careful eye out for too; use lint-free wipes! I did this gel polish french manicure on a friend, only to find when I was wiping the tacky layer off that there were stringy, lumpy bits protruding from the polish. Uggggh. 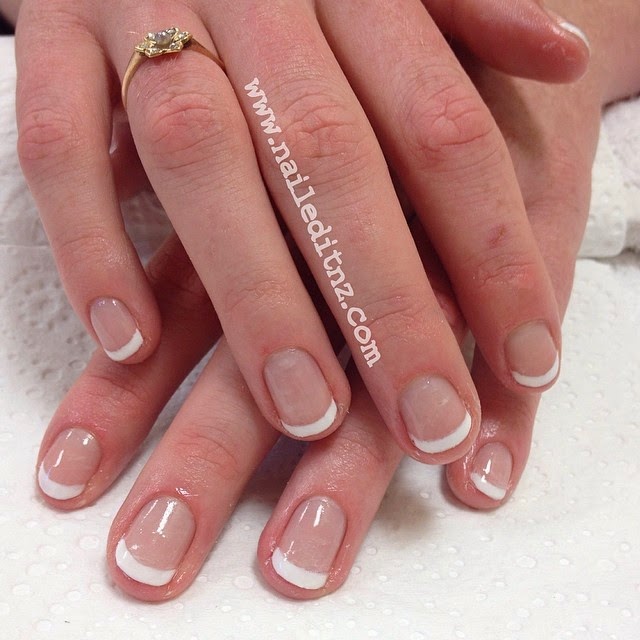 This next design was possibly my first venture into gel polish, it was just glittery tips - and even that wasn't simple! Making sure all the glitter is flat (so it doesn't stick out, tempting the client to pick it off) is not easy! You think you've got it, then you use your finger to check and bam it comes off. 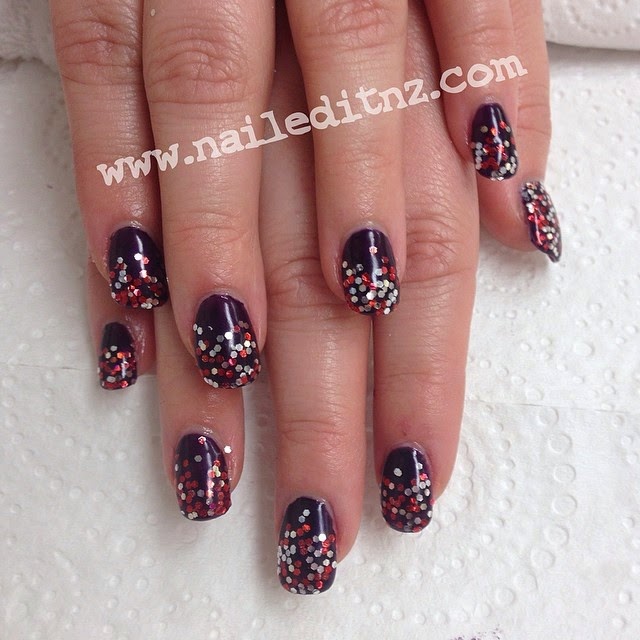 The photo below shows my first attempt at nail art on myself, just after my very own gel polish for my home salon arrived (I use mostly EZflow Trugel). I'd heard that using striping tape was WAY easier with gels than with normal polish, so I thought "sweet, lets give this a go!" IT DIDN'T WORK. The polish seeped under the tape, the tape didn't stick, I had to repaint all the lines... and it ended up being horrendously thick! Add on top of that I forgot to order a black and it made for some rather average skeleton nails. 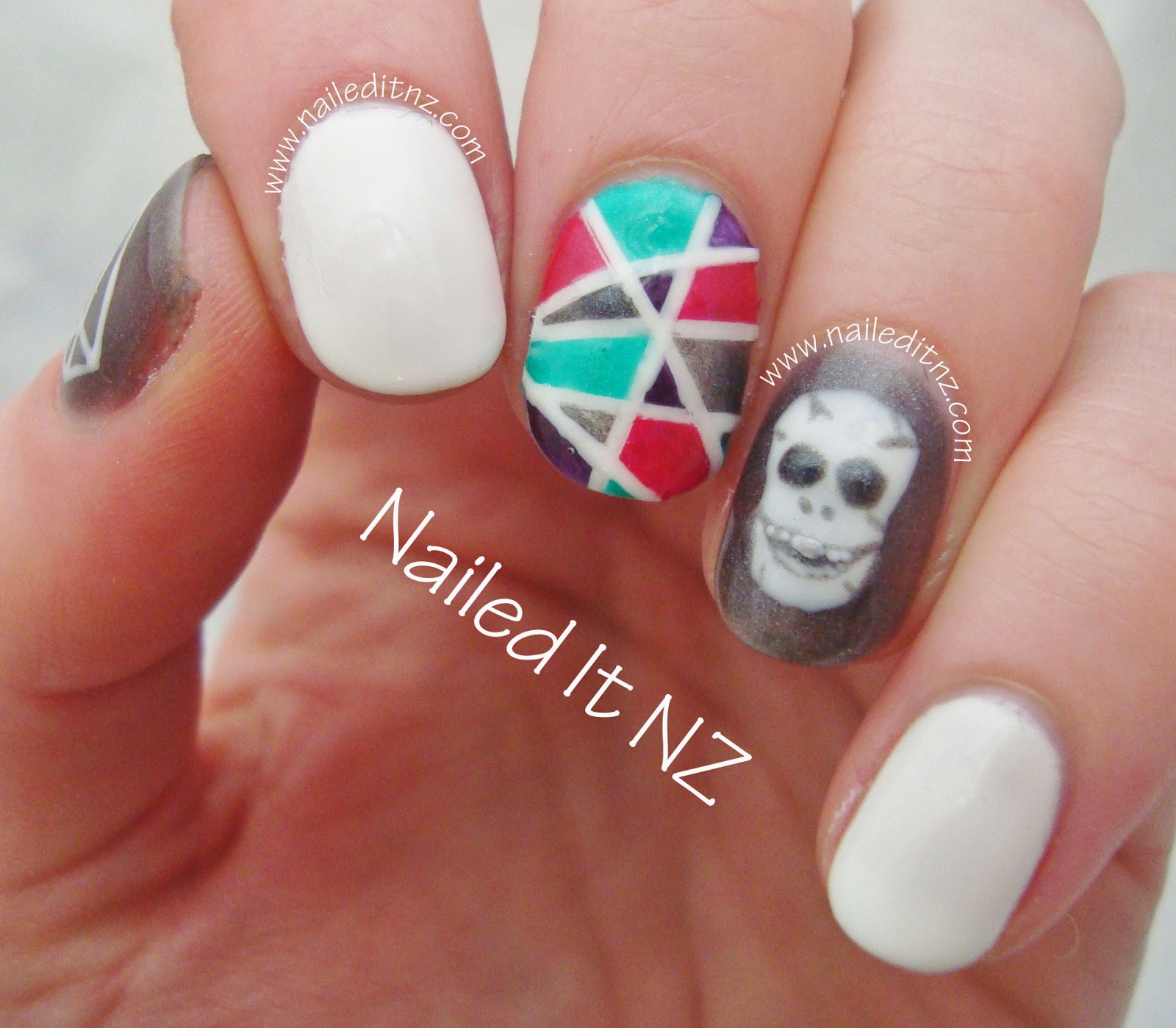 Sometime around here, I turned a corner. A small corner, more of a slight gravitational pull, but a change non-the-less. I managed to pull together these daisy nails, on top of some acrylic nails I had done. However, many of the daisies ended up looking like sea anenomes, so I'm not sure how much of a success this actually was... 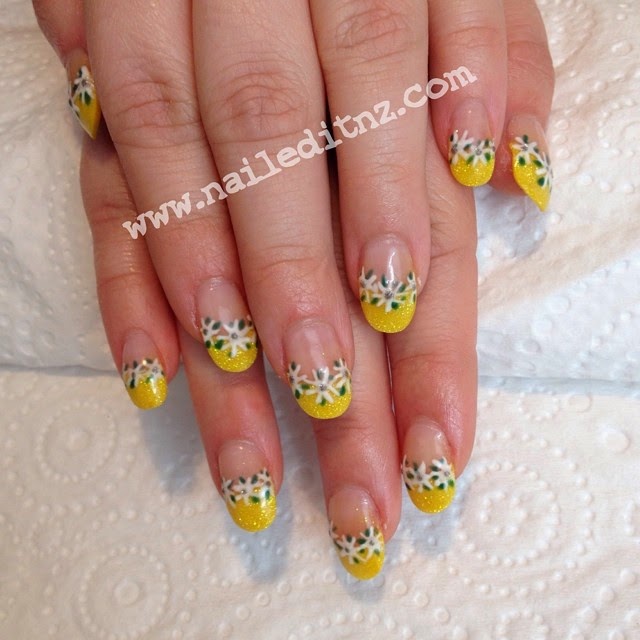 Now we're getting somewhere! These roses turned out pretty cute, and were lasting well until my friend/client got a job in a bar. Even gel polish can't handle opening drinks all night :(. 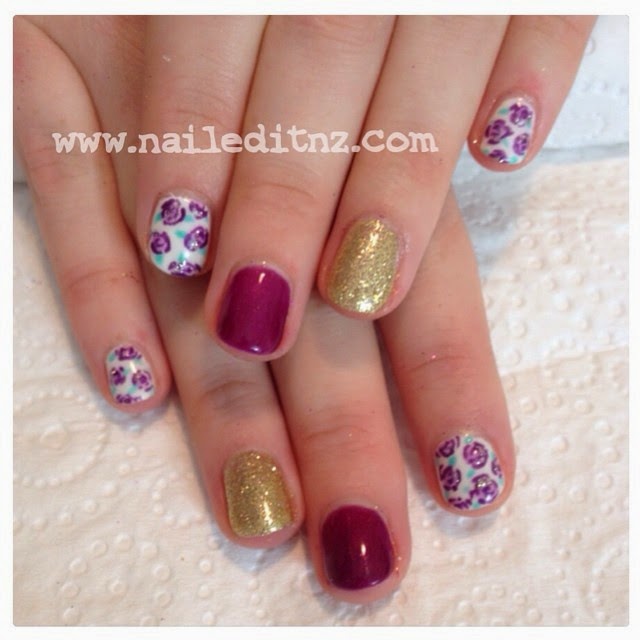 Little nails makes it harder to cap the free edge, apparently, but I got there. These did turn out pretty cute though. 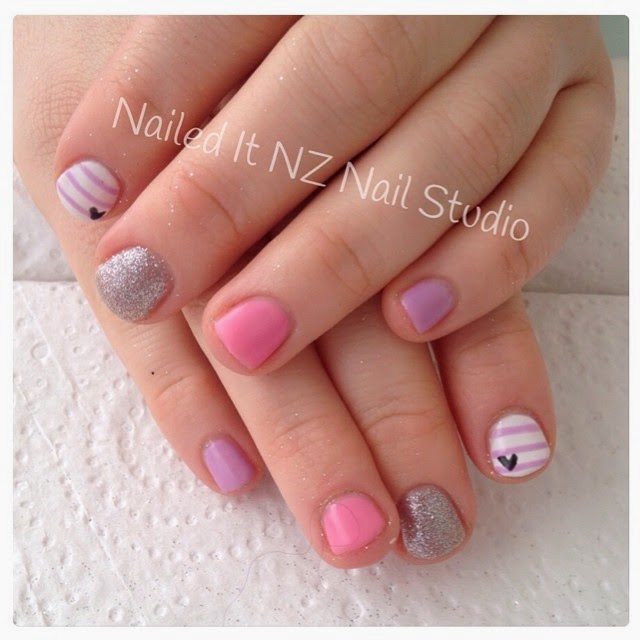 Next it was time to re-do my nails, and was happier with them this time. Learning!! 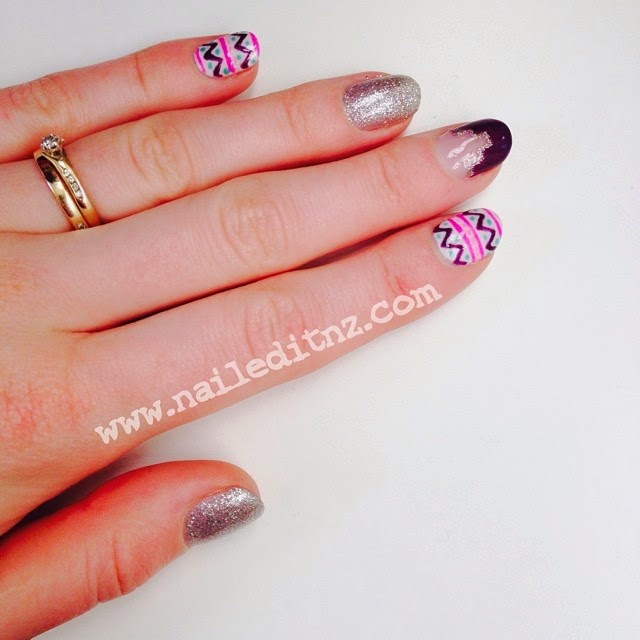 Visiting my sick Auntie in hospital = finding a victim that can't run away (just kidding, she wanted them!). Considering I had to work around the hospital bed and help her move her hands, I did alright. I like the roses! 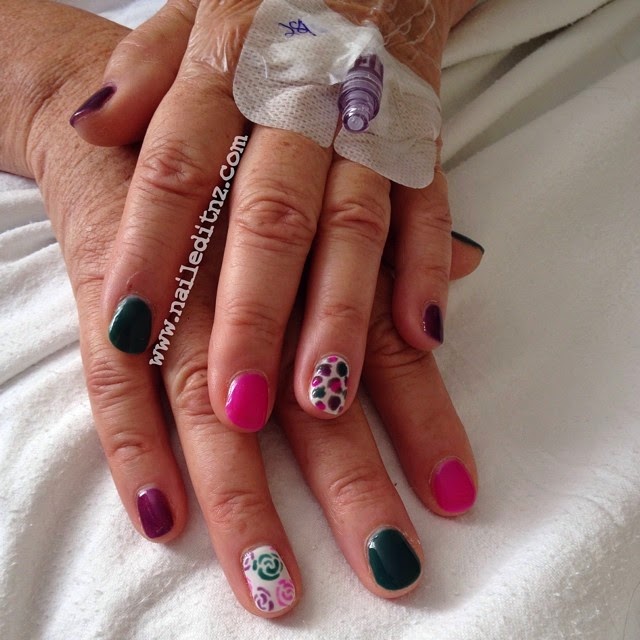 New nails for myself using a mix of Gelish and Trugel - my new favs! Absolutely adored these ones, and was sad when it was time to take them off and do some normal swatching. Which reminds me - my base coat never wants to come off! Another issue to tackle - I talked to my teacher and she said to try using the gel bonder only around the tips, where it's more likely to chip. So they're stuck on too well now? I'll give it a try. 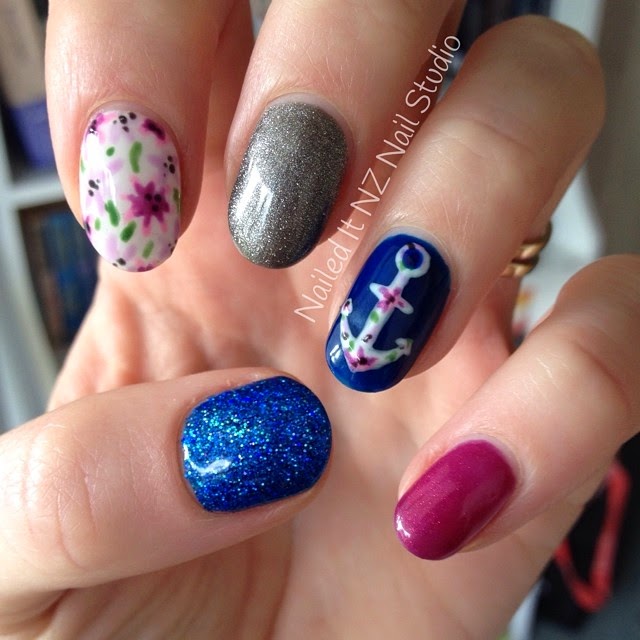 I thought these triangle geometic nails were adorable, unfortunately my friend's boss disapproved of the bright colours and we had to replace them only days later, with super boring nude gel polish. I glare slightly at that shop when I walk past it now. 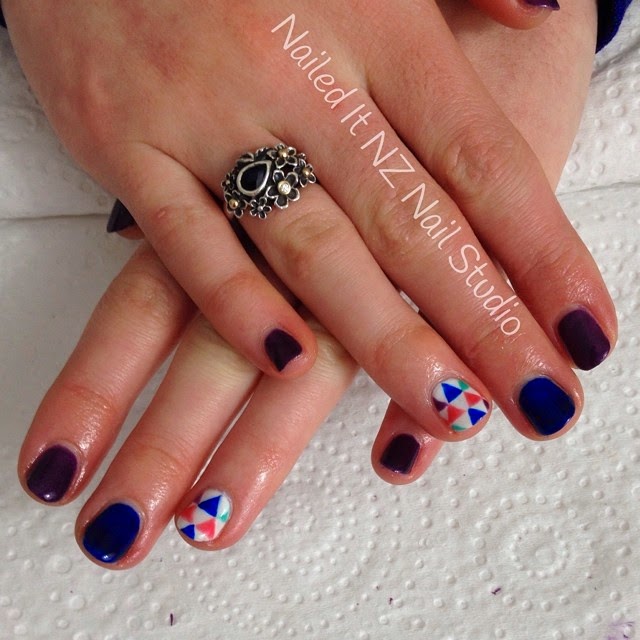 Some success! I did my mother-in-law's nails and they lasted well, so she was back for more three weeks later! Even managed to coax her into a little nail art. 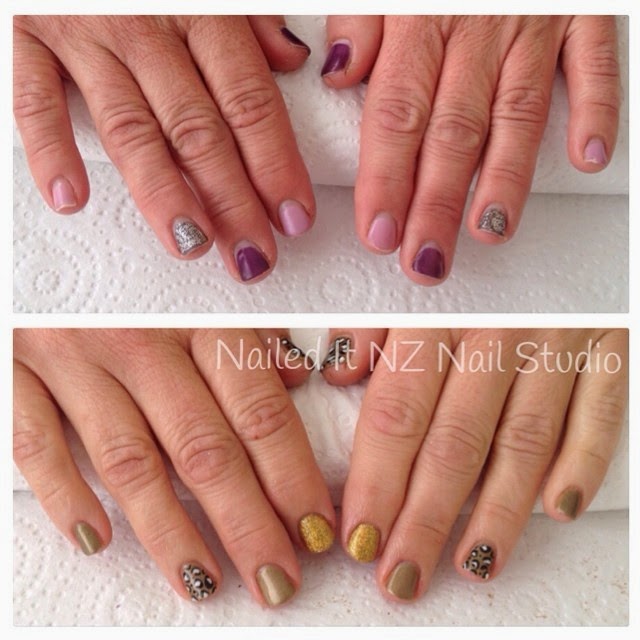 Now these were fun. Harry Potter themed! Pity I didn't have a yellow - that posed quite a problem. We worked around it though, and I now have a beautiful Gelish yellow on the way. As well as many more. #oops 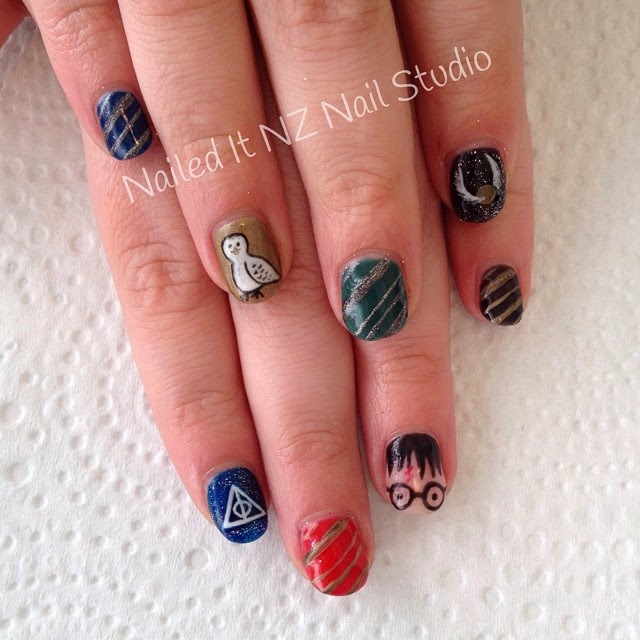 Breaching new territory in the one below - gel polish gradients! I don't really know if I did it right; it took ages and I'm pretty sure there must be a better way. I've been googling tutorials like there's no tomorrow. I swear, as soon as I get this "down" I'll make a simple, easy-to-follow to tutorial, showing the different ways and pros and cons! That's something I've found that is very different in the nail tech industry versus the blogger industry... many techs keep their secrets to themselves. They want to be the special ones. It annoys me. I'm a blogger at heart and will always share. 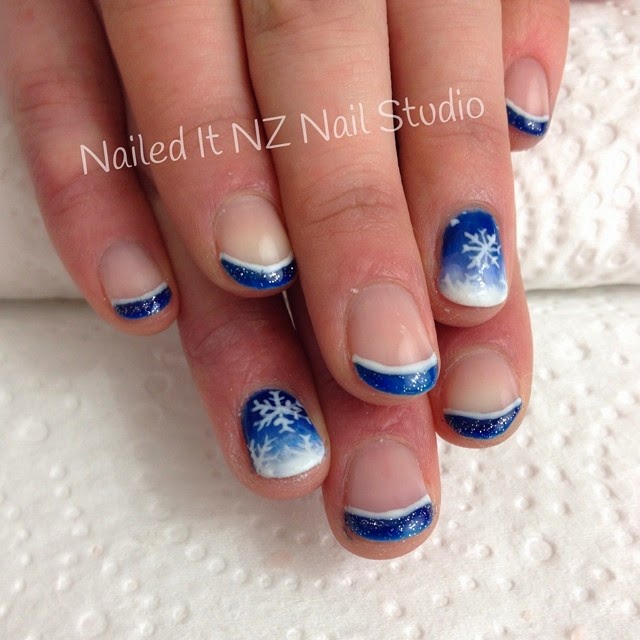 These ones were a bit random, but I did really like the hearts! 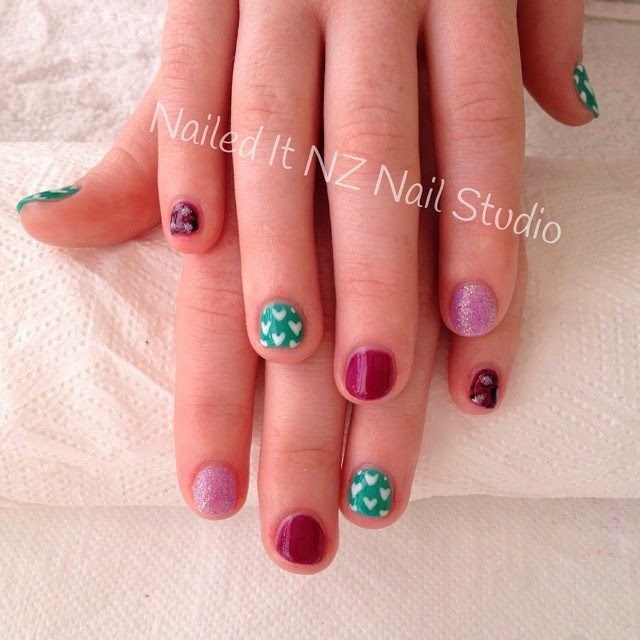 Gel polish over gel extensions. I do this thing, where if I run out of time at course to do nail art I bring my client home to get some done, free of charge. It's now being referred to as "bringing home a stray." Last time I did this I didn't have dinner until 9.30... but it was worth it ♥. Strawberries are so cute! 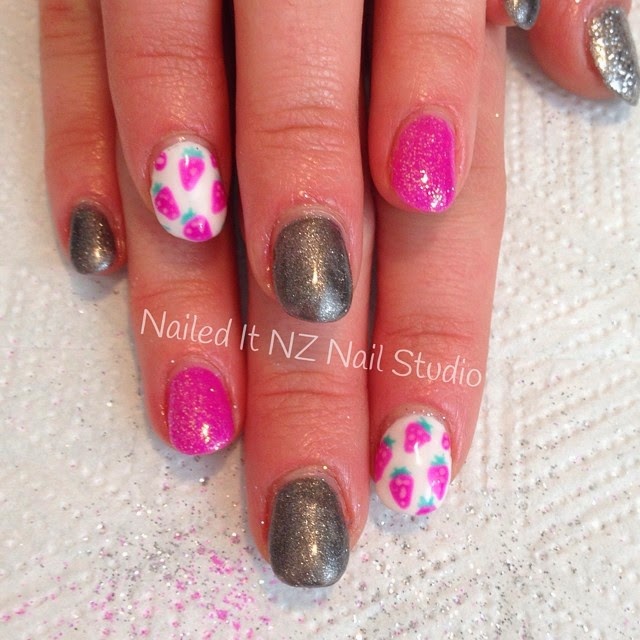 My awesome client Tania lets me do crazy nail art on her, so I had heaps of fun doing these girly pirate nails! I might try using acrylic paint with a gel top coat at some point though - all the detail plus acrylics makes her nails very thick. 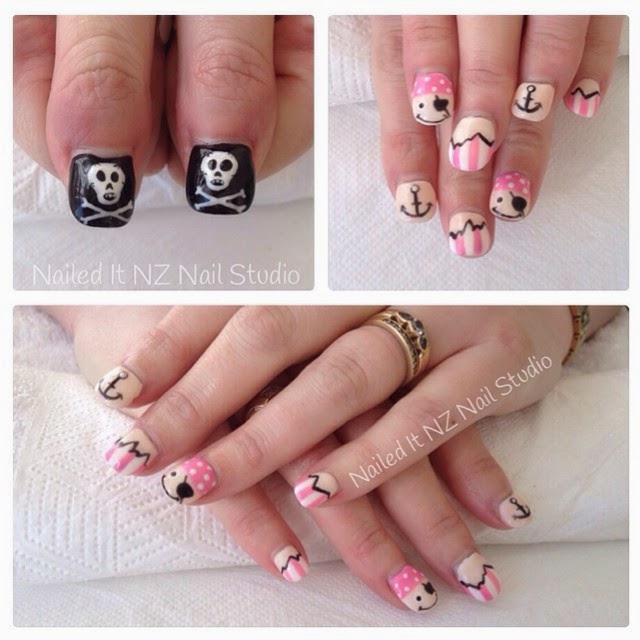 And then there were these, on myself, yesterday. I was really keen to do an intricate design, inspired by the yellow daisies earlier in this post. I was feeling more confident, like I knew what I was doing. Up for a challenge...

Nope, I can't stand them. They're sitting on the edge of my fingers making fun of me. "We don't match ANYTHING!" "You call that a daisy?" "It's too much of a mission to change us, so we're staying!" 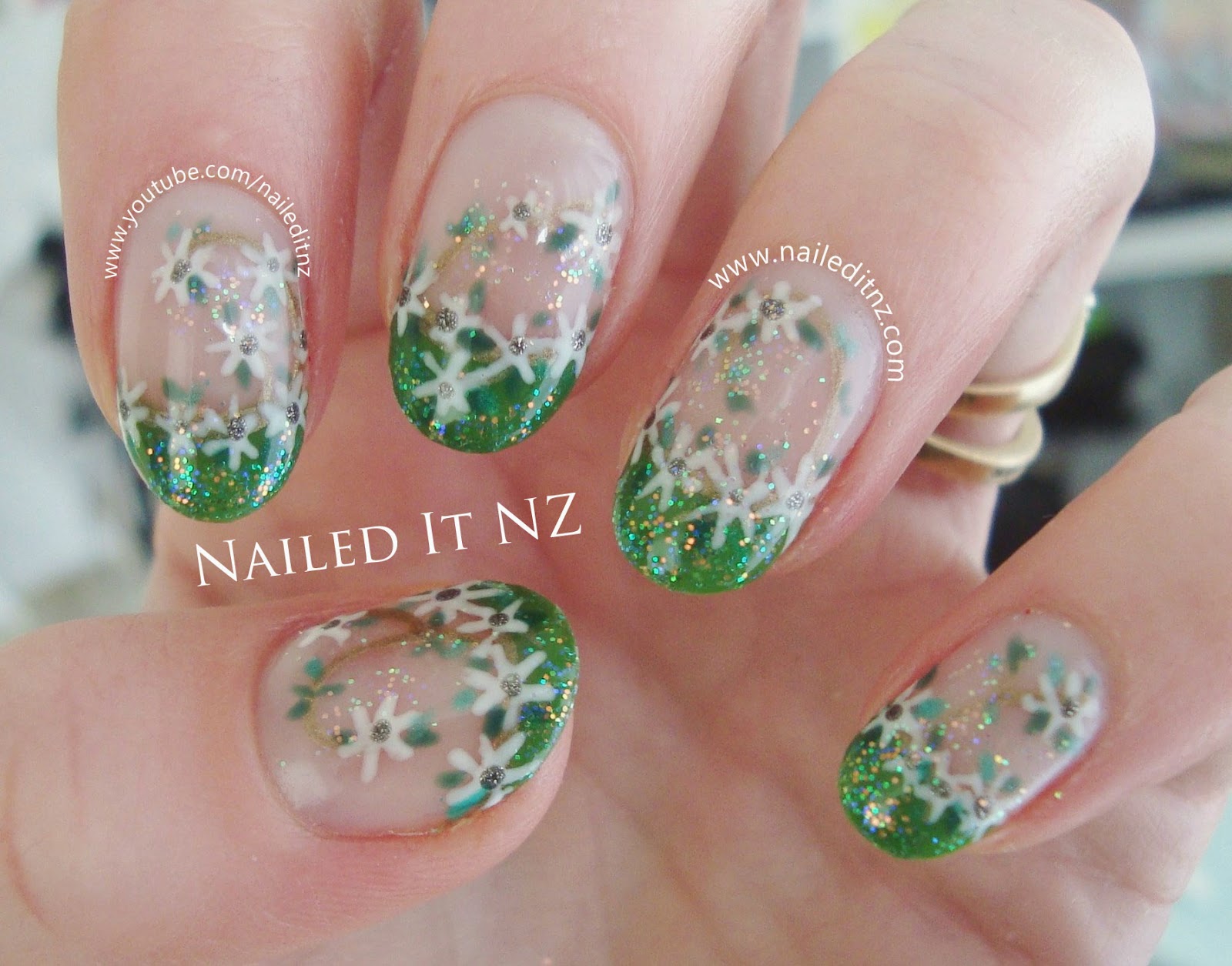 I still haven't figured out striping tape (it's been my nemesis for the last two years), although I'm slowly figuring out gradients. I've been using two top coats to make glitter smooth, although that seems like wastage. I'm going to buy a different brush to press it in with - I think that's part of the problem. Sometimes the top coat will peel - only on some people though! Studs and rhinestones are my latest challenge. Oh, and did I mention that when I was doing a client's top coat the other day, the BRUSH STARTING SETTING! It's pretty much useless now. Idiot me for having the curtains open, curse our pathetic New Zealand Ozone layer. A new one is one the way (new top coat, that is. Not a new ozone...).


So really, this blog post is one big complaint. One big whine of "why isn't is wooooorking?"
But, it is. I'm learning, I'm getting there, I'm being challenged every day and I'm learning something new every day. Might be awhile before I can recreate some of my old stuff with gel polish though!

And you know what is awesome? I have such cool clients. They are really nice people, so friendly and talkative and my work doesn't feel like work! I'm doing what I love, and earning money at the same time.
So really, I can't complain at all ♥.

Hope you like these designs! If you're a nail tech, or have played around with gel polish at all, have you experienced similar problems? How did you overcome them? I'd love to know!