I'm quite excited about having this tutorial, blog post and everything else about this design over and done with. It brings back painful memories! People keep asking why I hated this so much, so I'll explain it properly in this post. Before I continue though, here's the tutorial! And please subscribe!


Okay, so first off it wasn't this specific design that I hated. I actually really like how this turned out, but this was my second attempt at Sims nail art on this particular day. The first design was going to be super complicated, with a plumbob, a more detailed logo and a intricate scene on each hand. Here's a picture I was using for inspiration for one of the scenes. 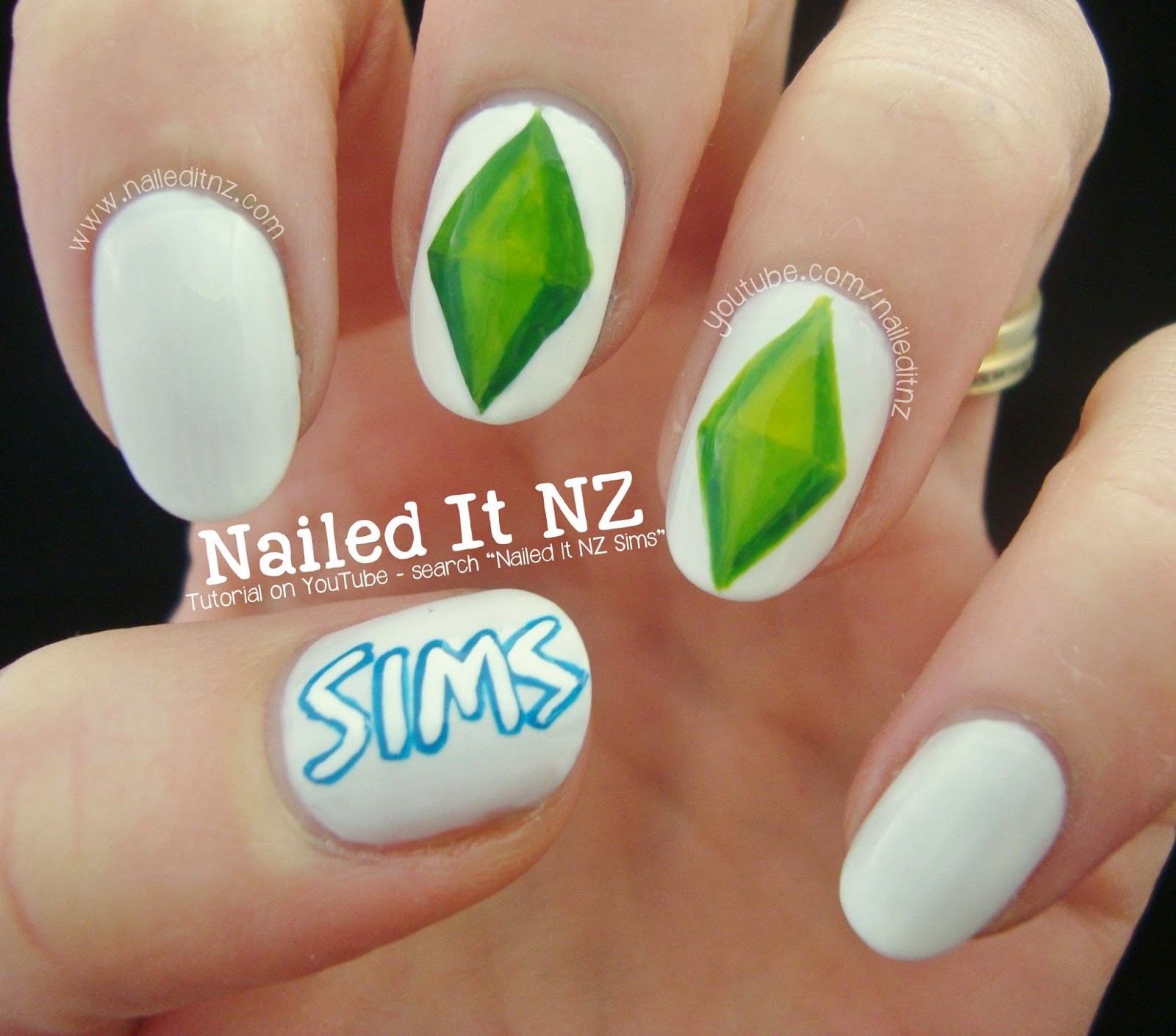 It started off okay. It was a bit cold in my nail room, so I put the heater on to warm it up for a few minutes. I then switched on my ring light and started filming.

First I painted my nails and waited for the base colour to dry. I followed that with a sponged-on design that would make do as a background for the actual art. So far so good. I decided to use acrylic paint for the next bit, and mixed it with water to make it a bit thinner. I guess I made it either too thin or too thick, because 10 minutes after painstakingly painting on the little umbrella, a bunch of cracks started showing up. They ran right through it, like crackle nail polish. It looked AWFUL! I had painted on the basic face shapes too, and could already tell they were going to crack as well.

Now if this wasn't being filmed for a tutorial, I could have fixed it up by applying nail polish over the ugly acrylic and going from there. However since I was filming it would have no chronological order and just wouldn't work. 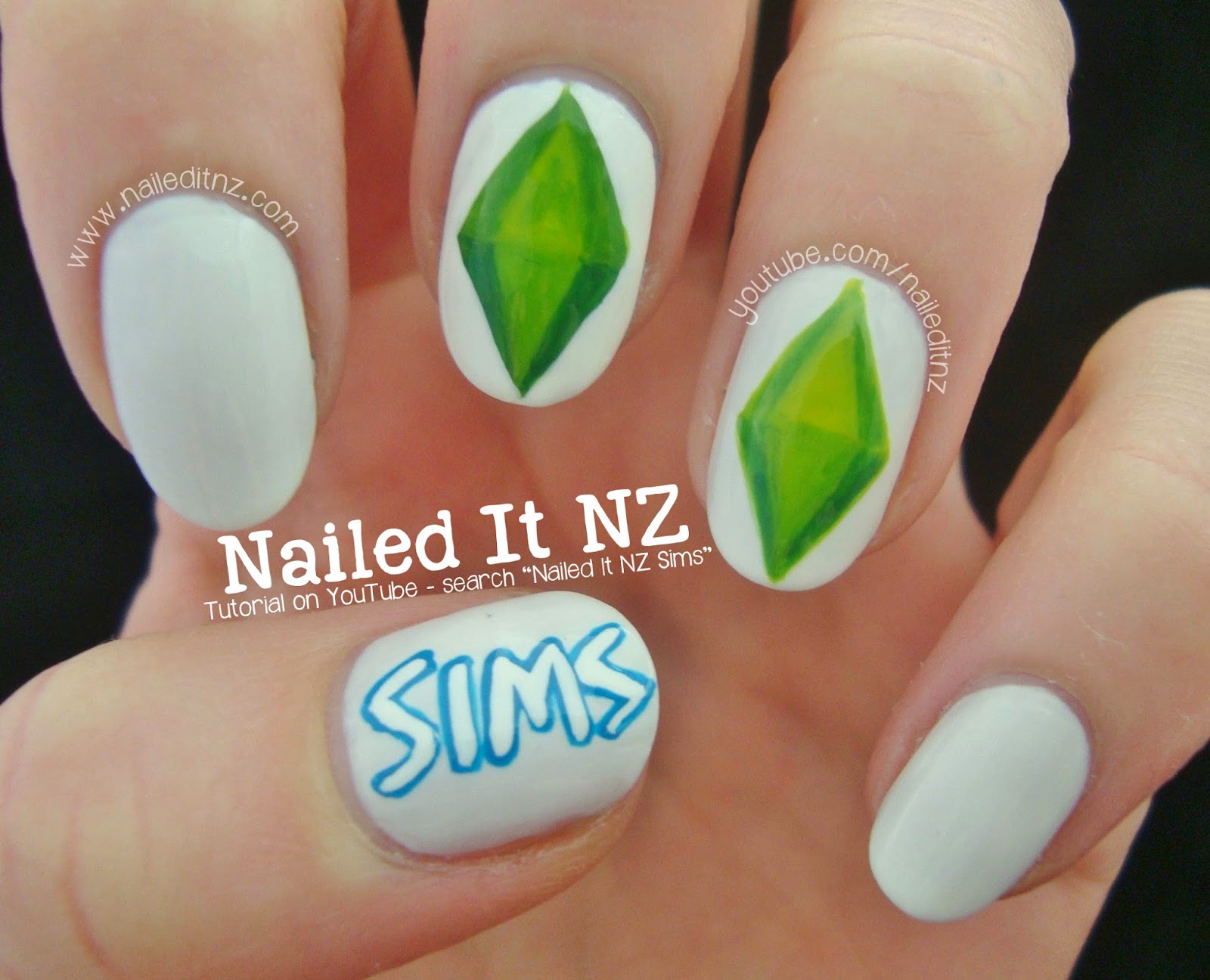 By this stage it was getting a bit too warm in the room too; my ring light produces a lot of heat and I could feel stress starting to bubble up. It didn't help that I knew I had to go into work in a couple of hours for some more training, and I could feel the time ticking by fast. It had already been an hour and a half since I started. About now I was chanting a certain word that starts with F in my head, trying to decide what do to. I was feeling a bit dizzy from the fumes and heat, too, which made decision-making not really my forte at that point in time.

So, with maybe an hour and a bit until I was due to start work I removed all the polish, deleted the footage and admitted defeat. By now it was approximately 2420429572597 degrees celcius in my room and my hands were getting a little shaky. I managed to pump out the Sims design you see here pretty quickly at least. I ended up only having time to do one hand, then I ruined that hand at work anyway. And at work (as a nail tech) my hands were all shaky and I couldn't go as close to the cuticles as normal without getting the skin.
Ugh. 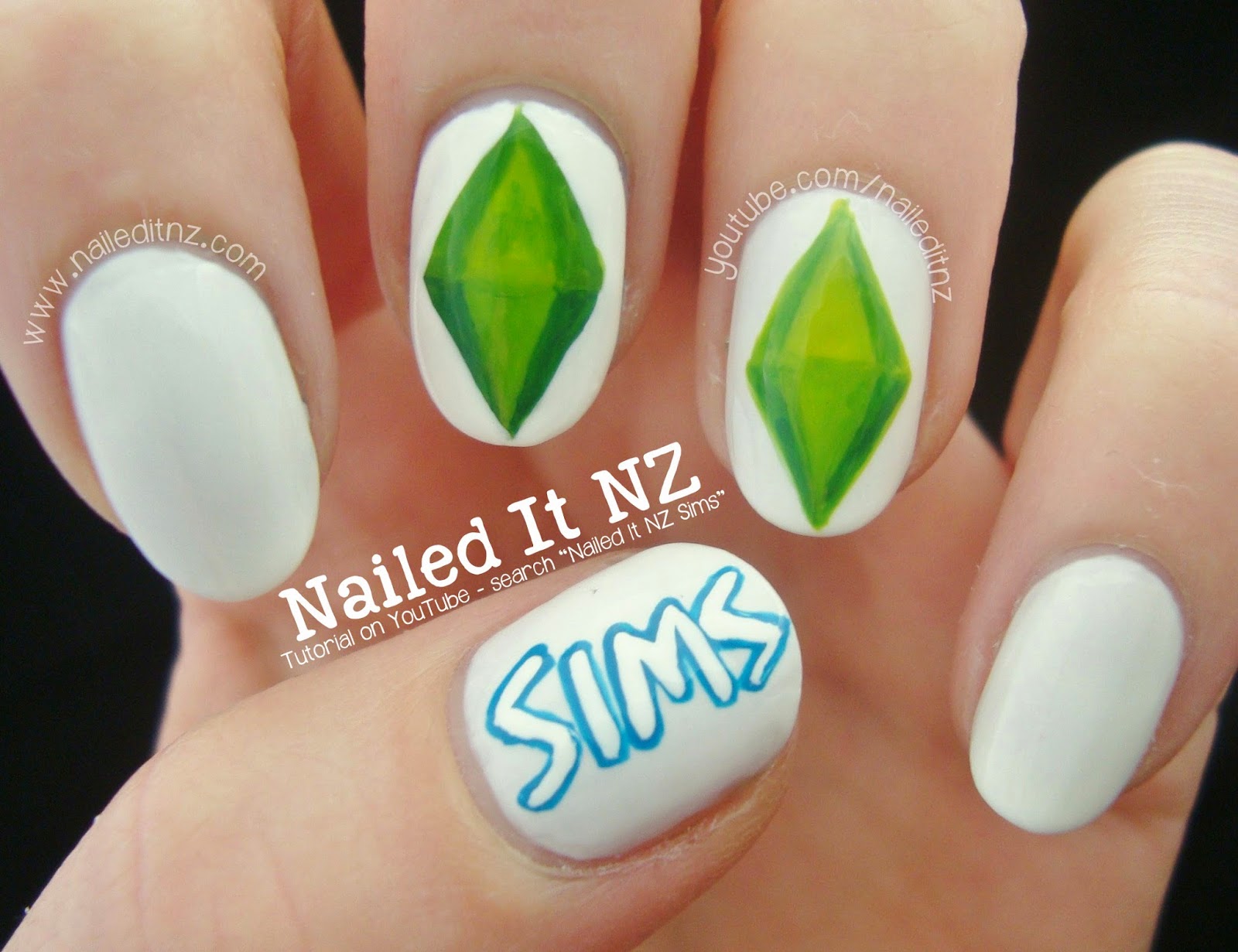 So yeah, that's why I'm a tad stressed and grumpy in the intro of this video. The part you can see was the best part too, you should have seen the rest. Editing it was almost as stressful as filming the damn thing!

I wish I hadn't deleted the old footage now, it would have been great on my next blooper reel, and to show you here ☺. 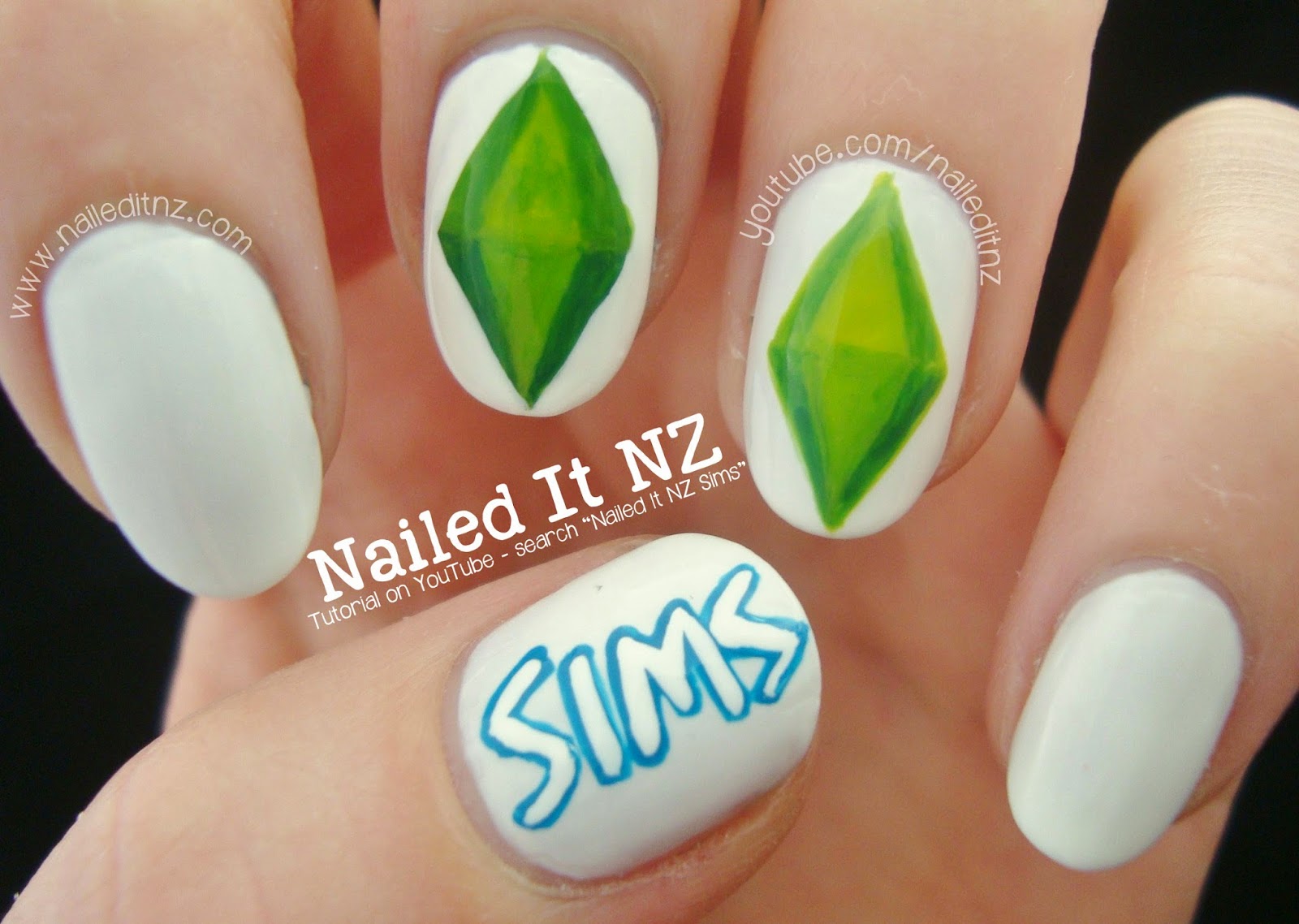 In hindsight, it's a little bit funny. Not a lot yet, but maybe one day it will be. That's what happened last time something like this happened - and I did keep that footage for bloopers! 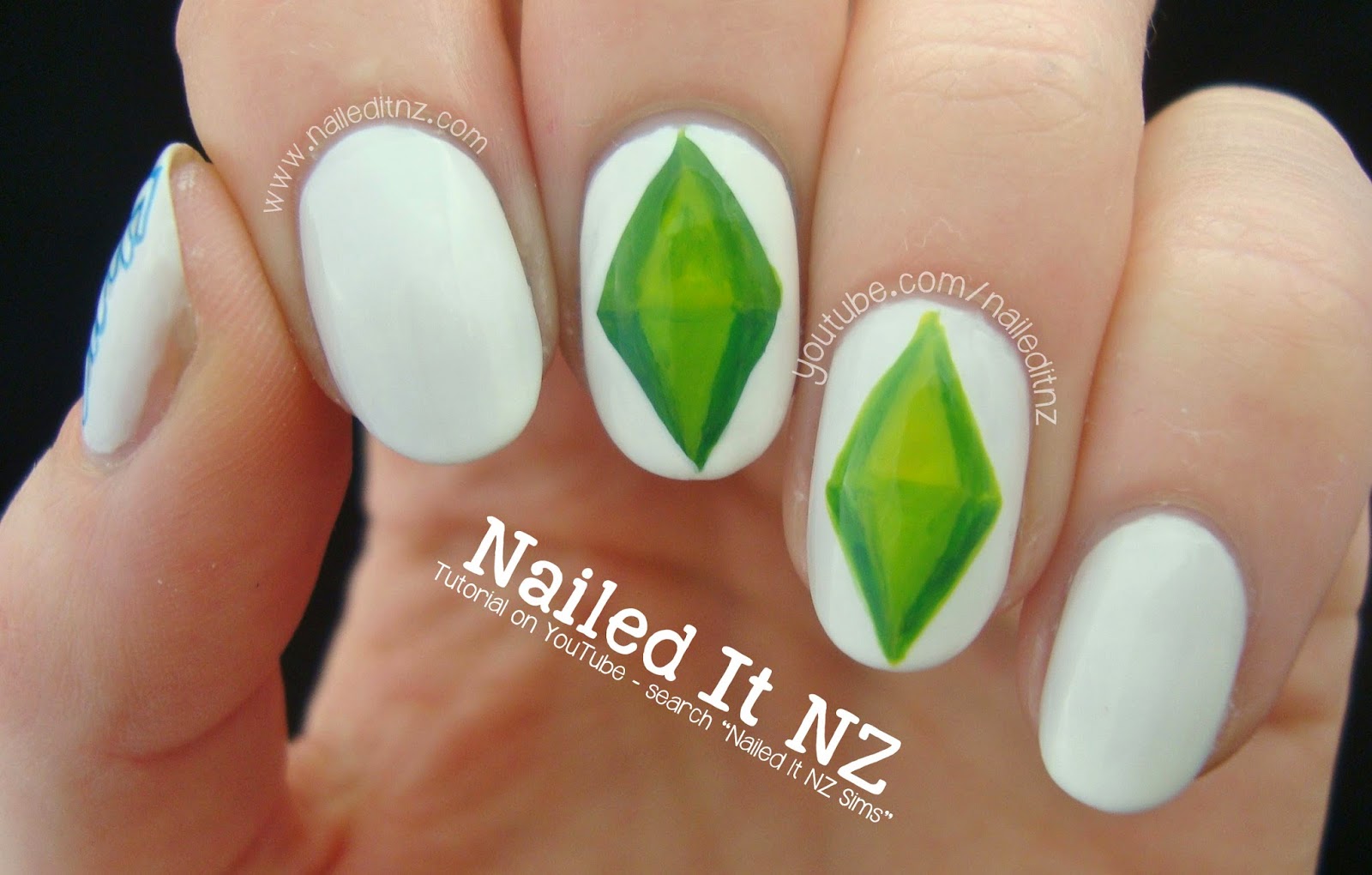 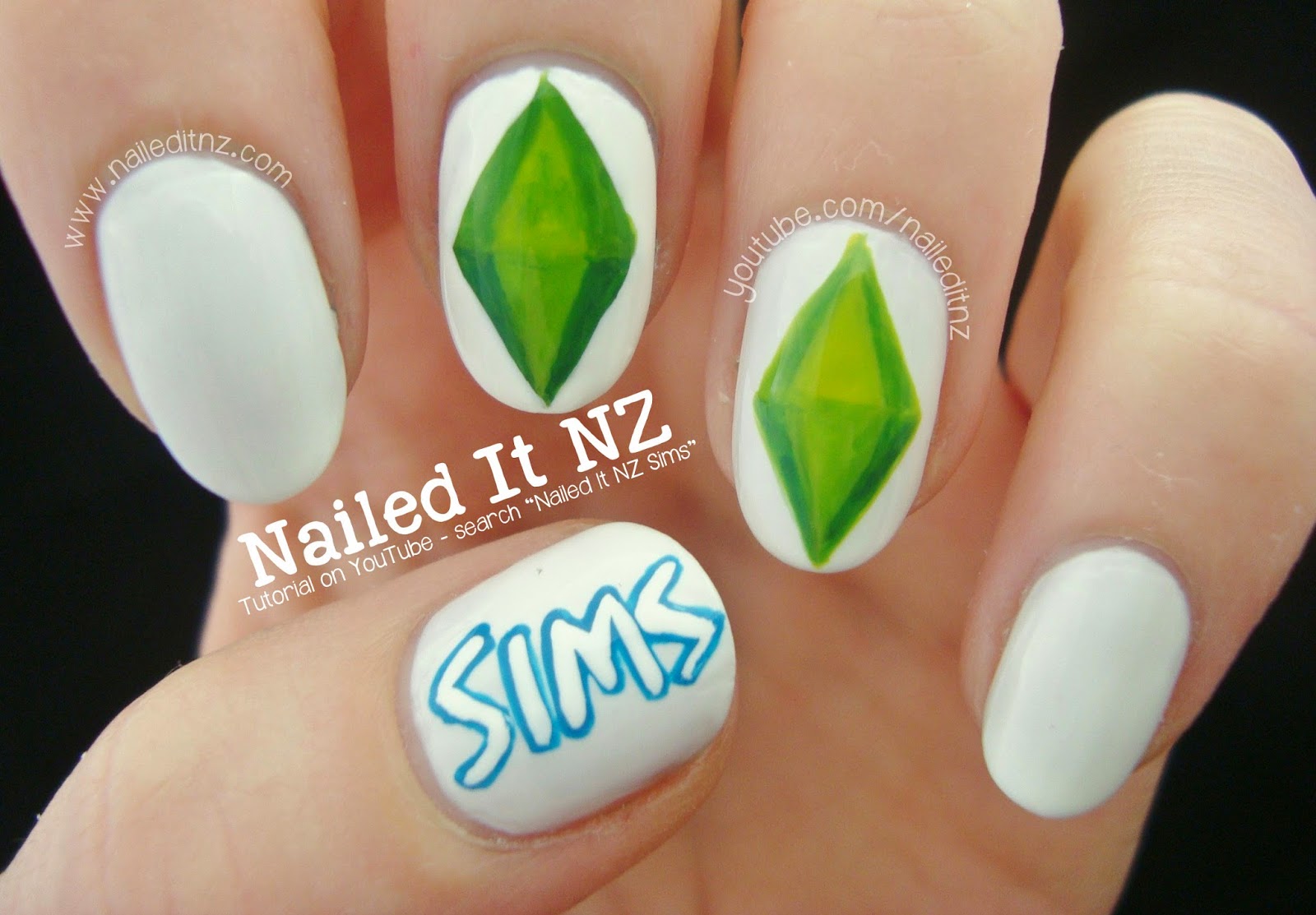 And my last point is that yes, I am a massive Sims addict, however the drama of getting this design done really did overshadow this! I've been playing it since I was 12 - which I just realised is half my life. I do have breaks though, normally because my computer spazzes out and can't handle the high graphic demands. I'm currently on one of those breaks, unfortunately. Can't wait for Sims 4 to come out! 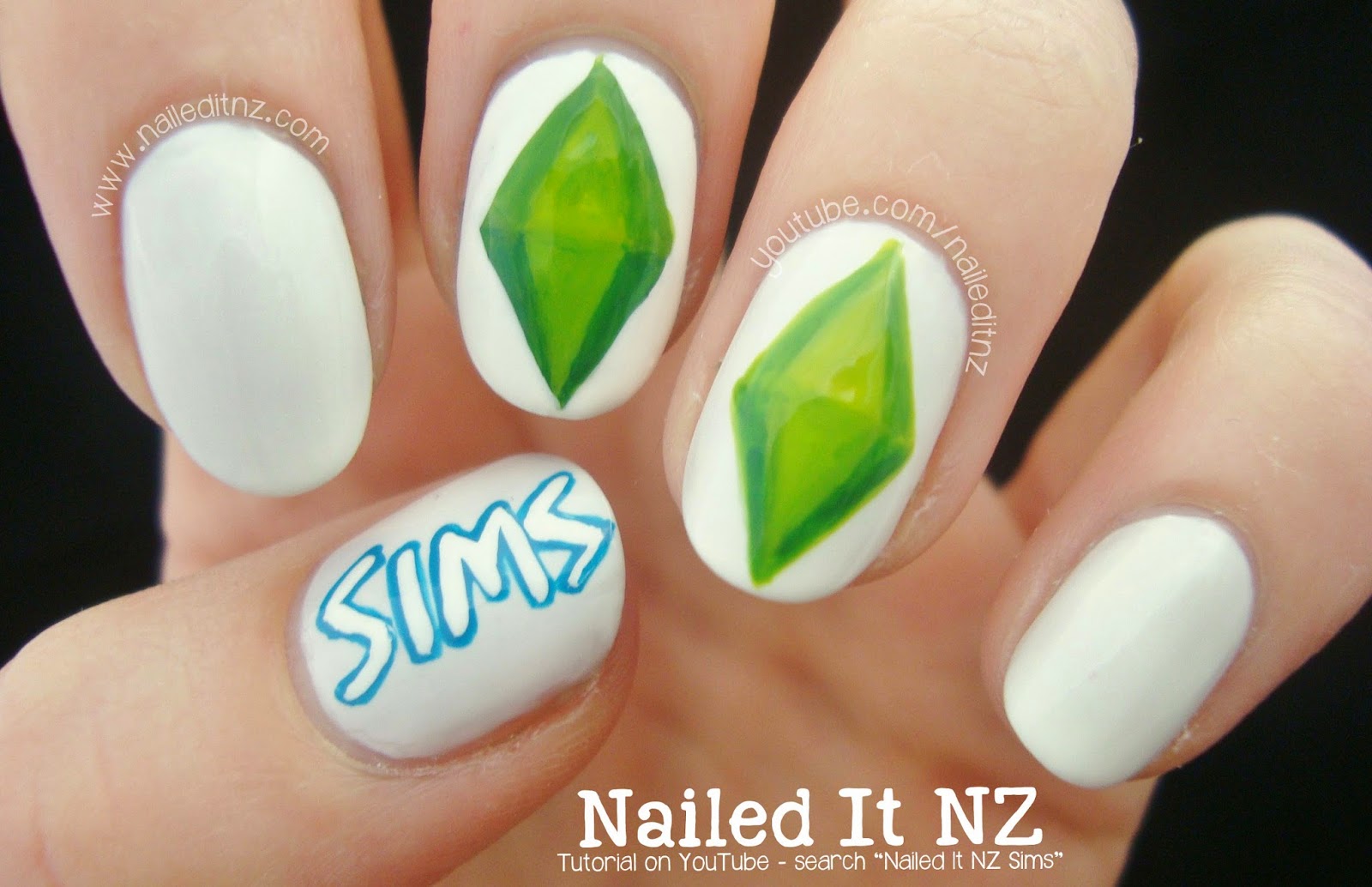 Hope you enjoyed this little story more than I enjoyed living it out, and like the tutorial! Let me know if you've got a game you love to play. This and Halo Reach are the only games I've ever been really obsessed with, I think (okay that's probably not true). Geeks rule!
♥