I wanted to do some anti-Valentines nail art (and a tutorial to go with it) but it was surprisingly hard to find a theme I liked. I considered broken hearts, hearts with a big red cross on it, black hearts, and other rather depressing and stereotypical depictions. But that didn't seem quite right - being single on Valentine's Day doesn't mean that you hate love, or have never loved, it just means that this commercialised holiday falls at a time that doesn't really work for you. I also thought of making my anti-Valentines nails something completely irrelevant, such as parsnips or umbrellas or turtles... but that was just weird. Then, after three days of it running through my head and knowing I was running out of time, I saw this picture pop up on my Facebook news feed.

I literally laughed (or snorted, to be exact) out loud. It was perfect! Anti-Valentines Cat Lady nails, here I come! 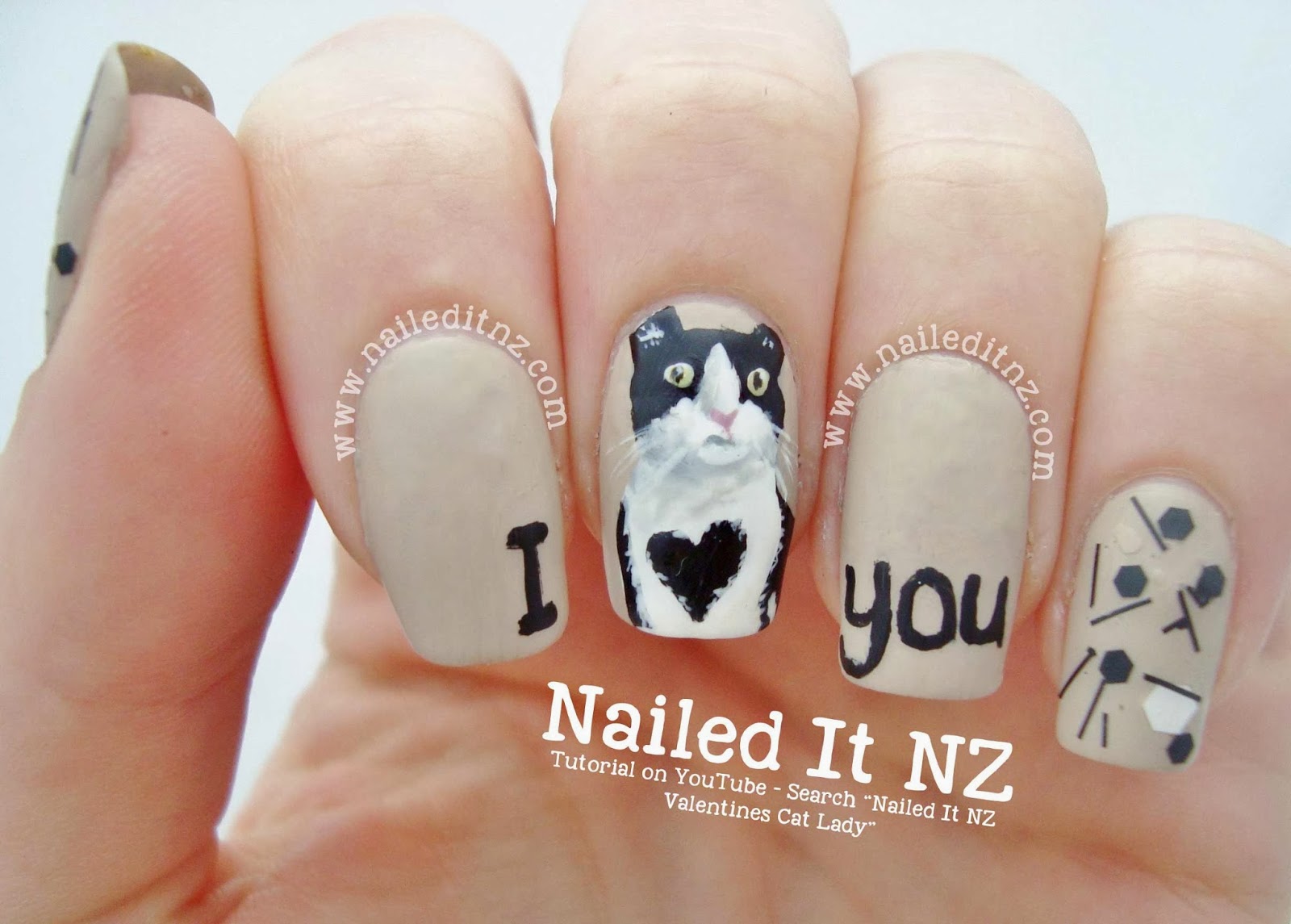 I didn't have a boyfriend in high school, and my best friend at the time was also in this (oh-so-tragic) position. While growing friendships, finding ourselves and building our social skills, we bemoaned our lack of social acceptability and laughed about how were were going to end up being "crazy old cat ladies." Which didn't actually sound too bad; cats in general are cute, don't argue back, clean themselves immaculately and are great at cuddling. However, a few months out of high school I met my now-husband, so now I count myself as a "cat lady with a +1."

So, when I say cat ladies I don't mean it as a bad thing; it's just this hilarious generalisation that's taken a firm grip in modern culture. And the picture/these nails visualised it so well.

Here's the tutorial! I was about to film the little intro bit at the beginning when my friend came over. We went for a big walk and by the time I got back I was sticky, gross and definitely not camera-ready. Naturally I filmed it anyway. So that's why I look a bit not-put-together. I fail at being a lady ☺.
Please subscribe! 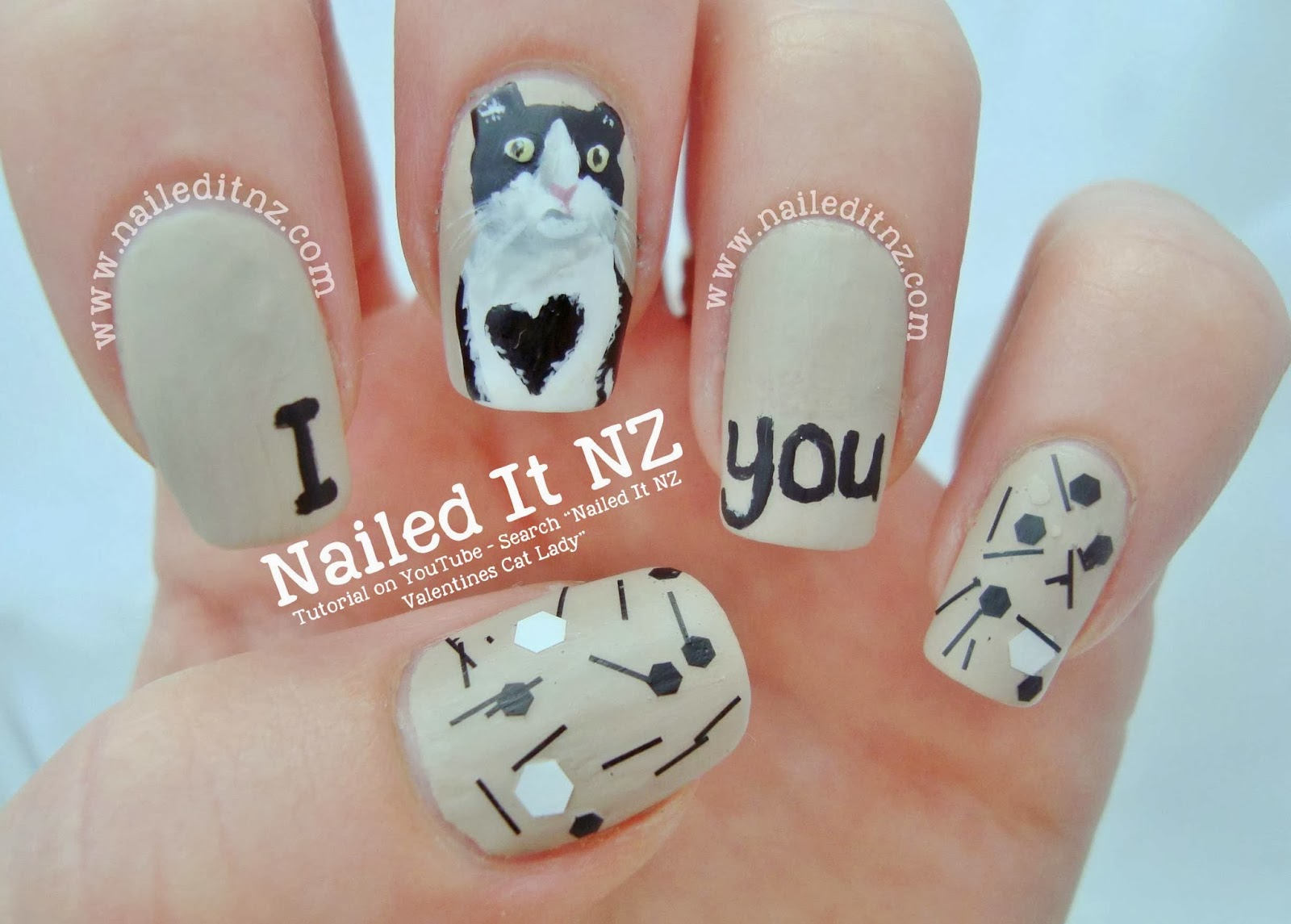 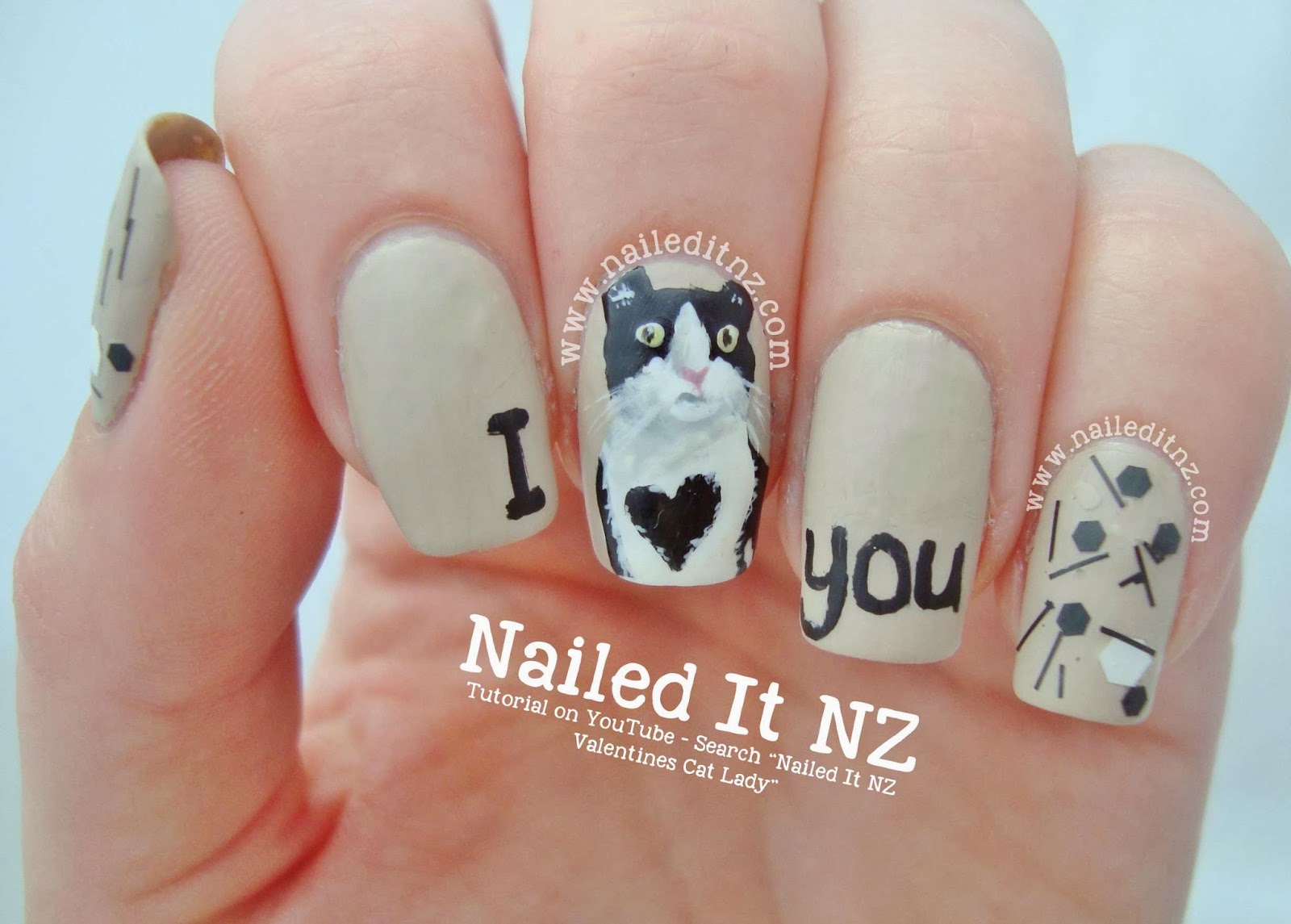 I really do like these. I kept them on for ages, and only took them off because I hit my nail on the ranch slider and broke it a bit (I blame the stupid door-to-door salesman).
I liked only having one "fancy" nail too. It makes it actually possible to do a tutorial for it, but it's still cool. 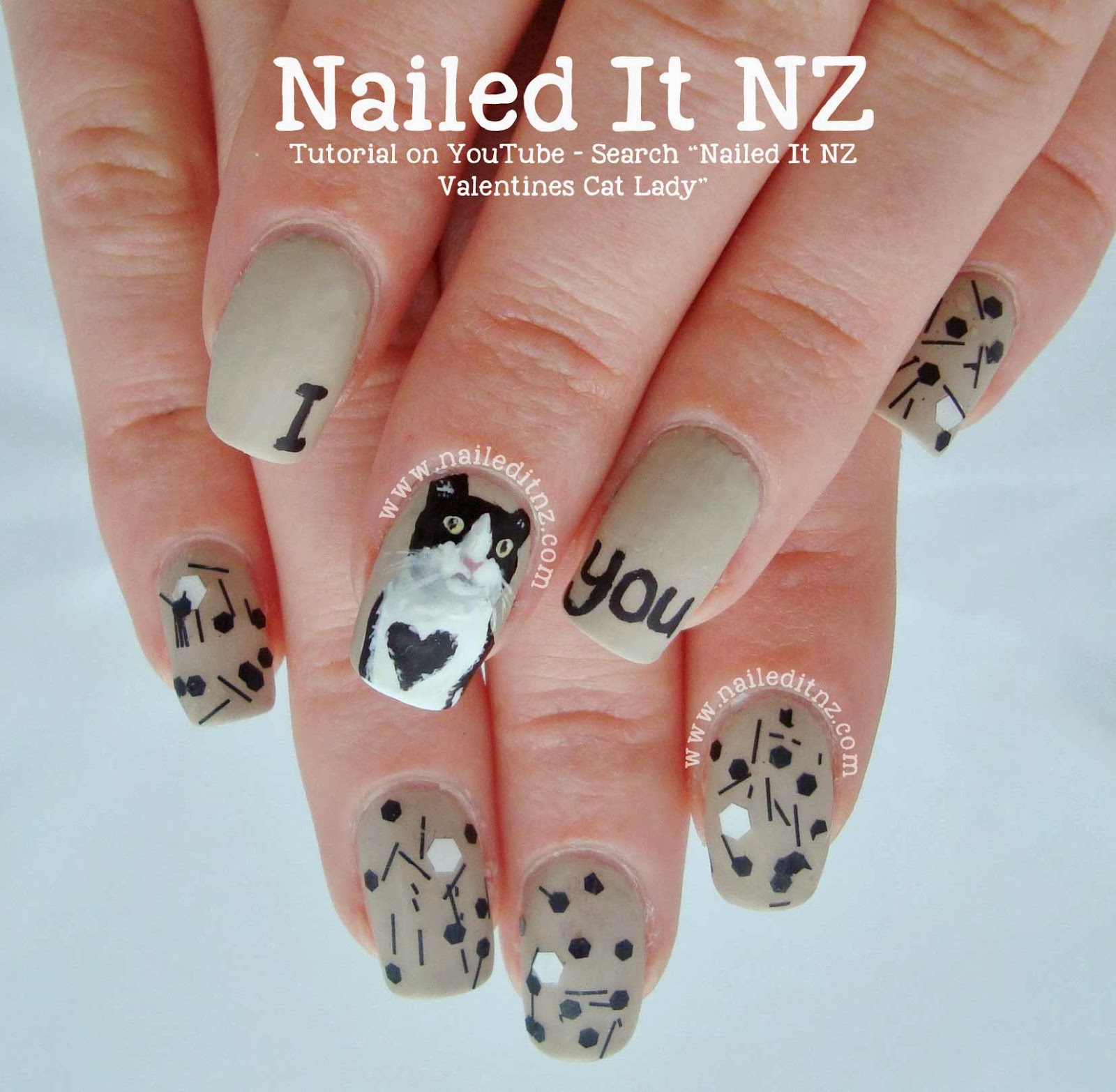 ^ I couldn't decide which picture I liked most so I'm putting them both in. #badass. 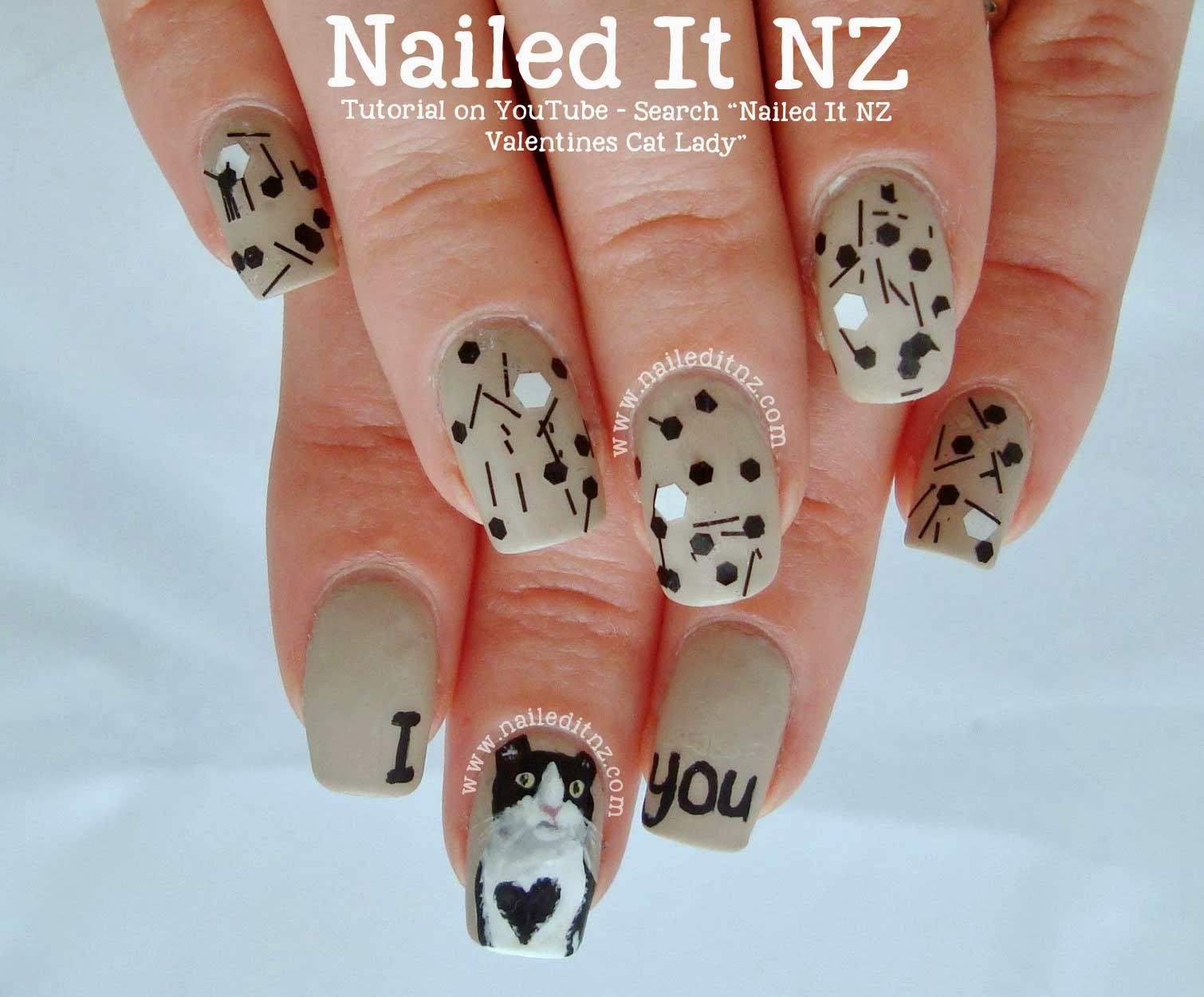 Hope you like these too! That's it for the nail stuff, but on a more personal level...

I'm in a good mood. And it honestly makes no sense. My husband got unexpectedly laid off today (it was a temporary role that was phased out) and now we have almost nil income. I don't know how we're going to pay bills, and eat, and do stuff. I need new bras and clothes, I need to go to the doctor but can't afford it; It's stressful. But you know what's really cool? When all this happened, Chris didn't decide it was an excuse to be a dick to me or anyone else. He didn't bottle it all up inside and not talk about it, nor did he hit things or do anything stupid like that. He went and visited his parents, had a good chat and then worked out at the gym for an hour and a half. I'm so proud! I finished work, met up with him and we started planning what we're going to do next. It was date night, so we talked about it and decided we'd go to the cheap little Asian restaurant we love, and we had a great time. We've got plans for job hunting tomorrow; life will continue, and best of all, we will have each other.

We won't be doing anything for Valentine's Day, because we do those things every other day of the year. And they're much more special than heart-shaped candies and wilted red roses.
♥
Labels: about me Cat China Glaze cute Jordana nail art OPI tutorial YouTube