I found an awesome competition here in New Zealand recently. It's called Cadbury Dreams - they ask people what their dreams are and then make a few come true. There are sooo many entries - 10,000 so far! So I know I won't win, but hey, might as well try. I have heaps of dreams, so to choose just one was pretty hard. But the one I came up with was pretty awesome, I think - watch the video to see what it was ;).

The video and nails weren't really necessary but I figured I should give it my all. My dream's casually too expensive though, the ones that have won so far look to be around or less than $1000. Mine would be excellent for filming though - so visually exciting!
Anyway, so here's my cadbury chocolate nail art! 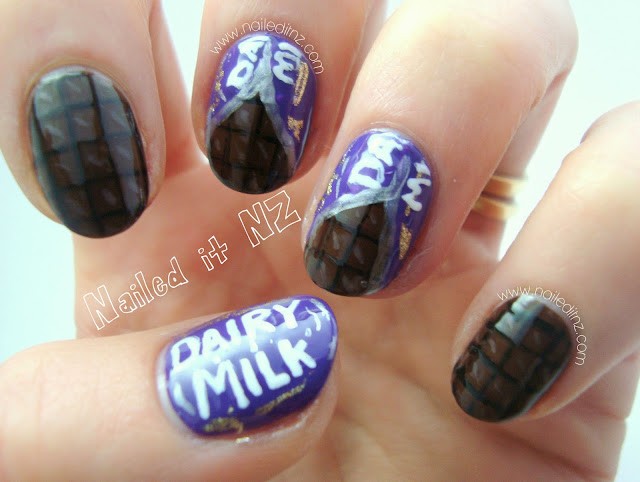 I don't love it, to be honest. I did the writing on the chocolate bars in the wrong place and the photos are pretty shocking. But oh well, I'll re-do them one day and make them better. Still kinda yum-looking! 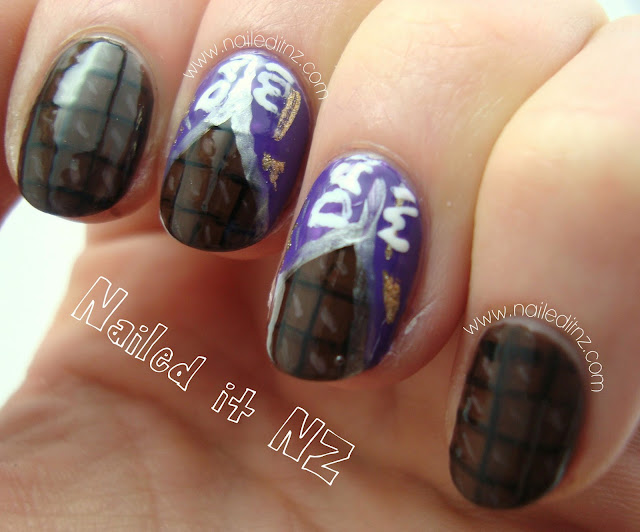 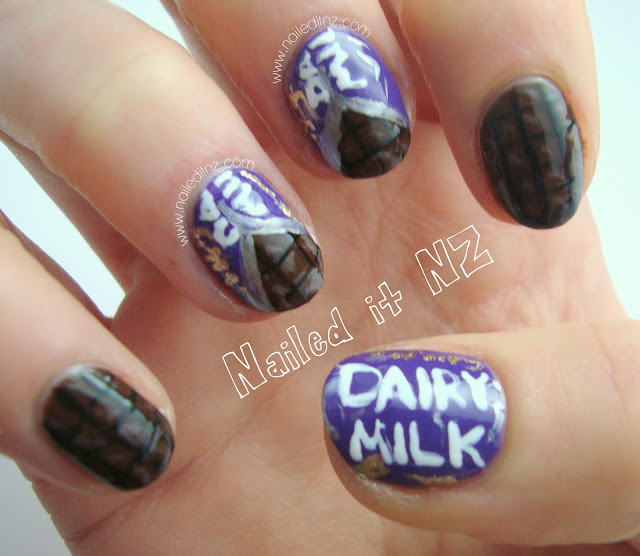 Hope you like my yummy chocolate nail art! Cadbury chocolate is blantantly the best in the world. Okay, Whittakers is great too, but I can't stand all that stuff from overseas! My Aunty used to send us chocolate from Europe when she lived there and it was so average - no offence to those who like it though, of course!. I think New Zealand's chocolate is just a bit sweeter.

Random little life excerpt; today my husband and I bought heaps of bubble mixture and blew bubbles all the way down one of the main streets in my town! People gave us such funny looks and one guy even talked to us, looking rather amused. We blew bubbles at the intersections and they just went everywhere... I felt like a little kid hanging out with my best friend. We also ate Mcflurrys and walked about 10,000 steps.
It. Was. Awesome.
I kind of just wanted to write this in here so I won't forget today in the future. On the downside, I found a heap of maggots at the bottom of our scrap bin. It was legitimately the most disgusting thing I have ever experienced - I didn't even scream when I saw them, just threw the bucket down and ran indoors quivering, begging Chris to save me. I actually just about cried. What a wimp, I know, but they were so unexpected and wriggly and DISGUSTING! Eurgh, now I feel sick. Time to think about chocolate again, me thinks.