Now that I'm not working as much, I'm devoting a lot more time and effort to my blog and YouTube. I really want to make something out of this, especially as I'm going to do a Nail Technician course next year. I figured that one way to do it was to use something I hate to my best advantage... sneaky sneaky, Jessie! So, I hate when my pictures are stolen and go viral without credit. However, there have been times when this has been good - specifically for tutorials, as I label "check out Nailed it NZ" on Facebook on most of them. I'm assuming that's the reason why I'm coming up to 10,000 Facebook fans! So, I've decided to carefully (and painstakingly) make each of my YouTube tutorials into picture ones as well - but point the viewer straight to both my Facebook and YouTube! I think Robin Moses has the right idea - she watermarks all over her pictures telling people where to find her, and it works! She has 140,000 subscribers, and always increasing. For me, it might just be a colossal waste of time, but it's the best idea I have so I might as well give it a shot. Maybe it's not the best idea to reveal my marketing strategy, haha. But hey, if it works it might also help others and I pride myself on being an open and honest person, and therefore I want an open and honest blog.

Alright, moving on to the nail art! A few days ago I reviewed some studs for Born Pretty Store and in the process created some rather pretty roses - you can see that post here. I had a couple of requests for a tutorial so got straight to it! I uploaded the YouTube one last night, and created this picture tutorial this morning. 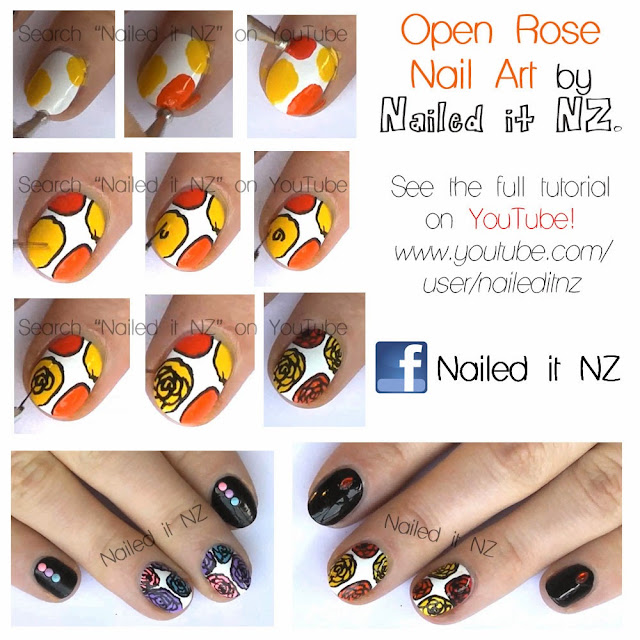 Obviously the picture tutorials are very minimal compared to my normal ones, but that just gives people incentive to check out my YouTube tutorials. I try to keep all of those ones under five minutes long, most around the two minute mark. This is because I can't stand watching videos where they just talk and talk and talk for ages and take half an hour to show you something relatively simple! For beauty things anyway. For entertainment YouTube Channels it's much more about the individual person, so they can do whatever they want. Of course, that's just my opinion.

I forgot to take a photo of the nails I did for this tutorial after painting them... I still can't believe it, I never do that! I realised straight after wiping off the first one and was so annoyed at myself! Thankfully I had some screenshots that I could edit a little bit, but they're extremely poor quality... lame. Here are the "best" ones. 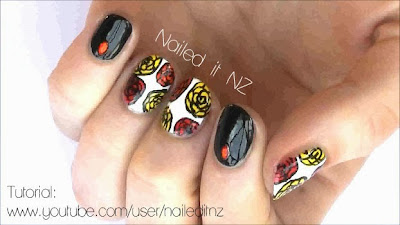 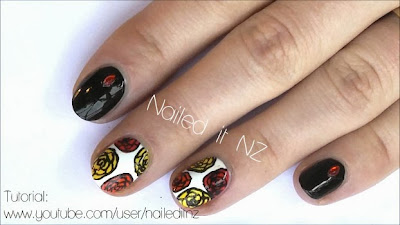 The Colours I used are:
Maybelline - Fierce N Tangy
Maybelline - Keep Up the Flame
Maybelline - Onyx Rush
China Glaze - White on White
Acrylic paint was from the Warehouse Stationary and the brand is FAS. 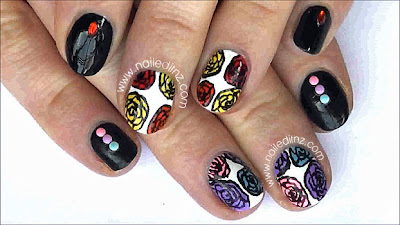 And again, here's the same design but different colours that I did a few days ago. I definitely like this one more, putting the photography aside. Still, it's fun to play around with different colours! I hope I get to see a few recreations! If you try it out, post it on my Facebook wall or tag me on Instagram @naileditnz. 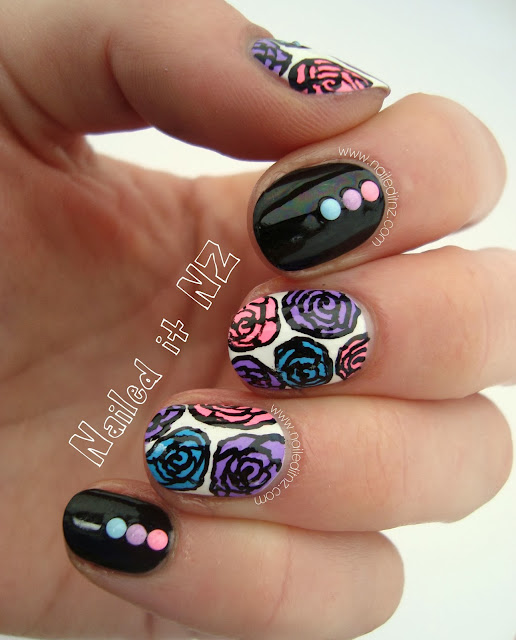 Well, hope this tutorial (or tutorials, technically) is useful!