Batman nail art! I spent the whole time painting these with "dinner dinner dinner dinner BATMAN" playing repeatedly over in my head. Extremely annoying, but at least it kept me focused on the manicure. These were requested by some of the four-year-old boys at work - and I'm so glad they asked for them! It's not something I would have naturally turned to, so it was good to challenge myself. I'm not a huge superhero fan (mainly because I'm jealous that many of them can fly) but I have watched two of the batman movies; The Avengers, and all the main characters from The Avenger's individual movies (Captain America, etc). 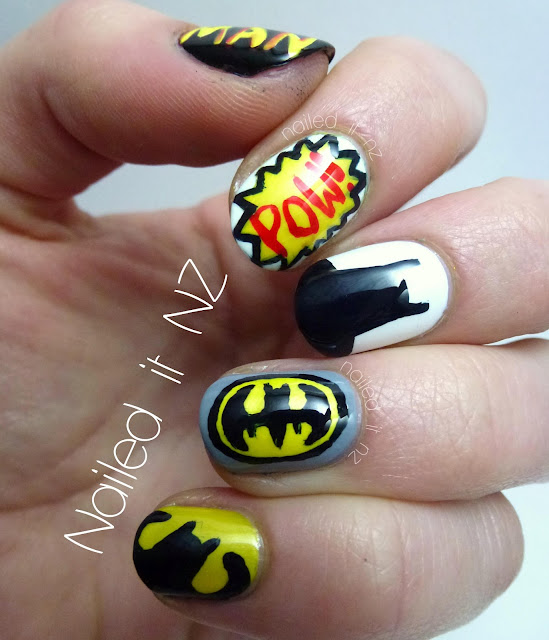 Best thing about these nails? They only took an hour to do on both hands. I've recently started watching the time when I'm painting my nails, and it's quite cool to see how much faster I've become! It would have taken me a good two and a half hours six months ago.

I guess when I think about it, most of my blog-related time is spent replying to people, watermarking, editing posts and looking at other people's artwork for inspiration. And boy, is there a lot of that. I had a decent scroll through my Tumblr dashboard for the first time in ages yesterday and I forgot how amazing people are at this! I feel like such an amateur compared to them! It's so cool seeing all the ideas, I'm never going to run out of things to do! 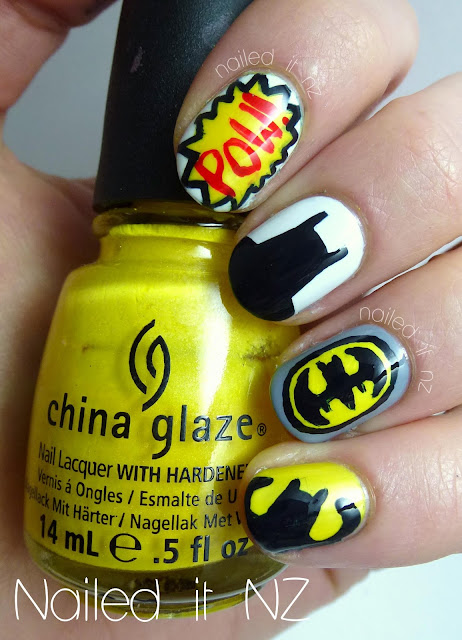 I'll run you through the different nails.

The thumb just has the word "Batman." I searched around for an official Batman logo but they varied a lot. I ended up making it up, but kind of basing it off this picture. I googled "batman nails" as well, to see how other people had done them in the past. I didn't want to directly copy someone else's, but I wanted to know what worked and what didn't. Here are a couple of the images I liked :).

I painted the word "Pow!" on my index finger, as it represents the comic book part of Batman, where he (and pretty much all other superheros) started.

The middle finger was inspired by this picture - I like silhouettes. Tips and Topcoat does some amazing silhouette nail art, by the way! Jeez I'm adding in a lot of links at the moment. Sorry! They're relevant at least!

I went for the Batman logo for my ring fingernail, but turned it sideways. My nails already are short at the moment, I'm not going to make it even harder for myself!

And on the pinky I just did a little bit of the Batman logo again. 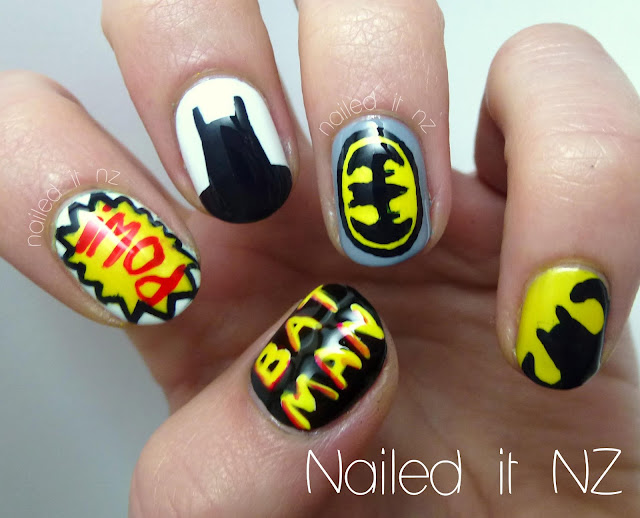 I cannot wait to show the kids these tomorrow! They're so gorgeous with my nails! Actually everyone at work is, not just the kids. One of the ladies found my article in the paper and brought it in to show everyone :). So glad I got this job! Trying to squeeze nail stuff in is a bit rough though, especially as I finish at 5.30 and it is well and truly dark by then. I'm not a fan of artificial light for photo-taking, but these photos worked out alright so maybe I'll give it another shot... 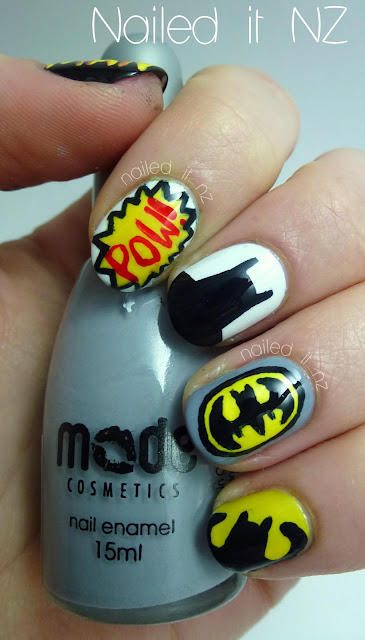 Hope you like these nails! I have a new YouTube video coming somewhat soon too - just got to edit it a little more first. 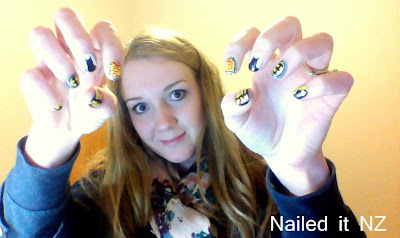