Have you entered my giveaway? Only one day left!

I'm finally almost out of posts - the last week's worth have been semi-old ones I prepared in advance, as I'm currently on a polish hiatus. One more design to go - if I decide to even put it on here, it's pretty average! I'm going to start making some nail art tutorials this week, and more Disney nails, and a million more things. I really hope I never stop painting my nails, as there are so many more ideas I have and that I need to try! It'd be such a shame to never do them.

These nails were done on my friend's flatmate, Rachel! She wanted them to match her dress she was wearing to a party, and I think we were both quite happy with the way they turned out. I hope they stayed on for awhile! It really seems to vary - I know one girl that can keep them on for two weeks with minimal chipping, and I kept one of my favourite designs on for a week recently with none at all. I think the trick is to be really careful for the first 24-48 hours, after that they're very hard and much less likely to chip or peel. But then some designs just fall off... I can't wait to learn to do acrylics and gels! Next year, hopefully. 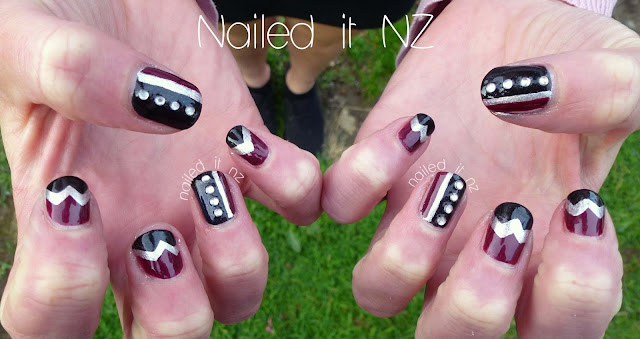 I'm in a polish-related dilemma, by the way, and I could really use some advice. I'm going to do whatever I want anyway (it's my new thing, haha) but I wouldn't mind getting some other people's opinions, open my eyes to the pros and cons, you know. I'll explain it at the end of this post. 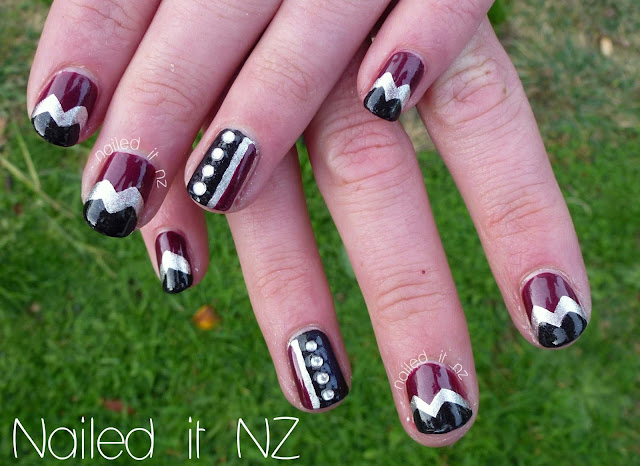 Here are some more nails I did on someone else recently - and they have a "I love wine" theme!

These were done for Kathy, whose son I used to flat with. I flatted with Campbell for about two years and while he's in another part of the country now he's still one of my favourite people! I had a couple of terrible flatting experiences before this, and was really nervous to give it another shot. Fortunately, I did, and those years have been some of the best of my life. So much laughter and stupid jokes and long talks. Anyway, going back to Kathy, she's just as lovely as her son and I was stoked when she asked me to do her nails, as I don't see her very much any more and it was a good chance to catch up! I'm doing them again in a few days, too :).

Oh boy, I am rambling a lot in this post. My husband's away at work and all I've got to do is tidy up, which'll take a very maximum of two hours. I have about seven hours to myself... haha. Long blog posts ftw! 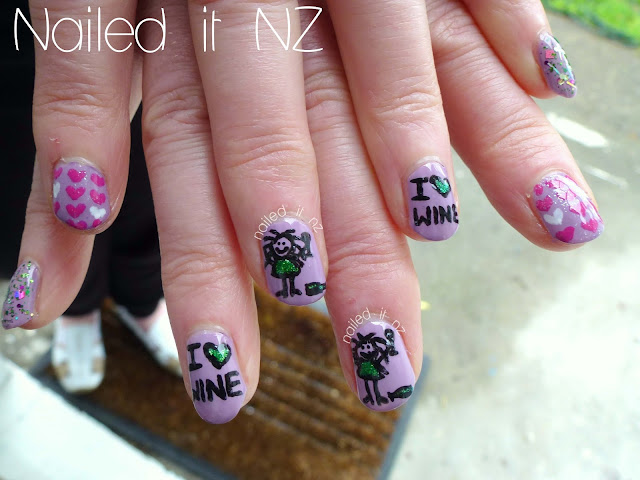 As you may have noticed, these are based around my "I love my Aunt" nails I did awhile back. I really quite liked the thumbs, take a look!

Okay, now it's time to tell you about my current dilemma.
I love nail polish. I love nail art. I love makeup, hair, and all things girly. I'm not supposed to like these things; I'm supposed to want to be a lawyer or a doctor or someone else who can save humanity... but I'm not going to do that. I'm going to do a nail technician course, or maybe even a beauty therapy course. I can still be smart! That's not the dilemma, though. The dilemma is one of those "counting your chickens" things, actually, as I'm trying to decide between three jobs, none of which I have been offered yet and one that I haven't even applied for. But hear me out!

Job #1 is at a healthcare store, I'd be a make up sales consultant which would be awesome! It could be a good step into the advertising and sales industry too, which I've been interested in in the past. It's full time and while it starts off at a low pay rate, if you reach targets etc it becomes quite good pay! I'd learn how to do facials and match skin tones and all kinds of fun things like that. I'd be forced to become more confident and "out-there," which would be good for me. The only problem is that it wouldn't leave much time to devote to blogging and YouTube, and I really want to develop my YouTube! Plus if I want to do a nail technician course next year I'd have to quit the job or go part time which seems a bit unfair on them, seeing as I wouldn't have even been there a year. Of course, I could just do the nail tech course a couple of years later... but who knows what a couple of years could bring?

Job #2 is for a childcare organisation, and it looks like a ridiculous amount of fun. I'd love it. I could play with kids all day, do art with them, play with playdough etc. I could paint my nails with cupcakes and bumblebees etc just for them. Again, it'd force me to be more confident, etc. Buuuut... it's only a casual role, although there's the potential for permanent hours. Also, it's low pay. Very low pay. Not that I really care about that right now, I just need enough to get by. Money would be nice though.

Job #3 is at a supermarket, in the Deli and chilled section. Not highly exciting work but I've worked in chilled before and can do it. It okay pay, to be honest. Still cheap, but it's above minimum wage. Also, my husband and flatmate work there, which would be kinda cool.

I've already had two interviews with both Job #1 and #2, and am just waiting to hear back from them. Lets just pretend I was lucky enough to get offered all three jobs - what would I choose? It's either #1 and drop (or at least spend a lot less time on) the blogging stuff, which I love, or take #2 and #3. That would work fine for doing a course next year. But what if I'd be missing a fantastic opportunity by not taking #1? I mean, is it worth giving it up in the hope that I'd get popular on YouTube? I do think I'd love that job, once I got into the swing of it. At the very least I'd finally have some money.

Sorry for the essay! In reality I'll be lucky to be offered even one of them, which would make the decision a lot easier :P. However, I've been thinking about it a lot and thought I'd see what you guys thought, even though it's just a theoretical question.
Let me know what you think!