I don't really know what to call these. They're water marbled, but they're also leopard print. They have dots and lines and squiggles and many colours. However, that'd make a rather long title, so I've called them pink graffiti nails. If anyone can think of a better name, let me know in the comments! 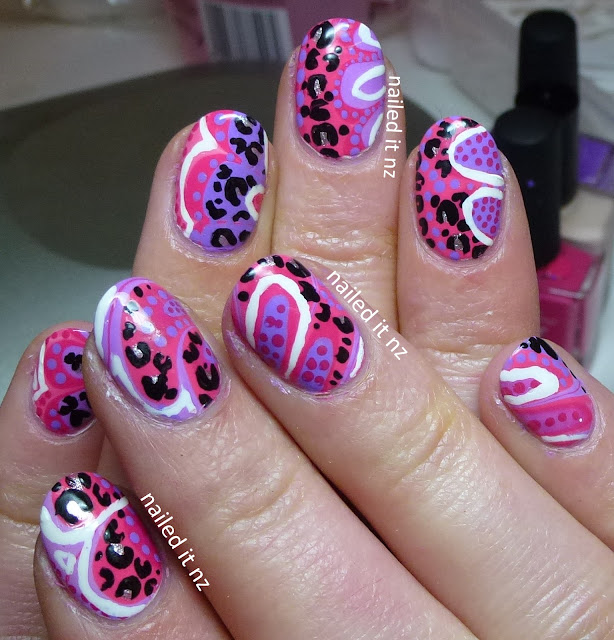 Again, these were initially water marbled nails - and one of the best attempts I'd ever had! However one nail didn't turn out as well as I liked, plus I felt like spending longer on them and do something more unique. I used several brand new polishes - so exciting! I won Sincerely Stephanie's nail art competition a while ago and got some gorgeous polishes from Harlow & Co!

This is the base colour I used underneath the watermarbling. I wanted a light colour to make the others "pop," but really it was just an excuse to swatch a new polish. It's Lime Crime "Milky Ways." I really like it it - opaque in two coats and a lovely colour. The photo's quite grainy, which is annoying. I got a new camera for Christmas, moved house in January and made a new lightbox in February. I've been playing around with camera settings etc but I'm still having trouble adjusting to all the new changes! I need to get it sorted by winter, when I can't take photos outside :o. 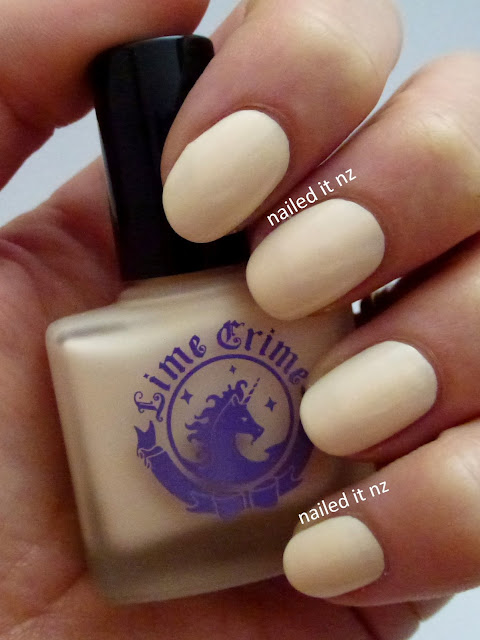 Here's the water marbling on my left hand - it's the first time I've got it this fairly regular! Now that I know where to place my fingers I think I'll have a lot more success in the future. Unfortunately the index finger didn't work out so well :/. 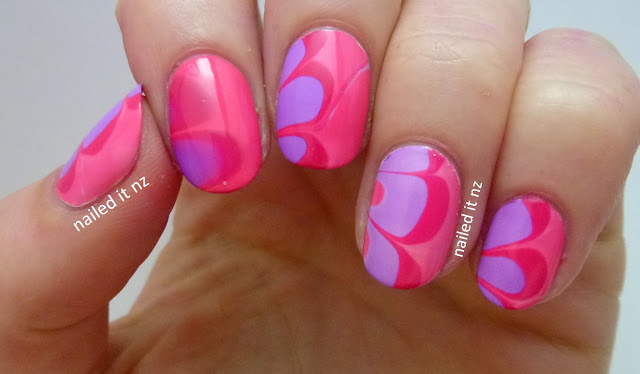 The right hand I wasn't as fussy about, as by then I knew I was going to add something else on to them anyway. I really liked the thumb on this hand! 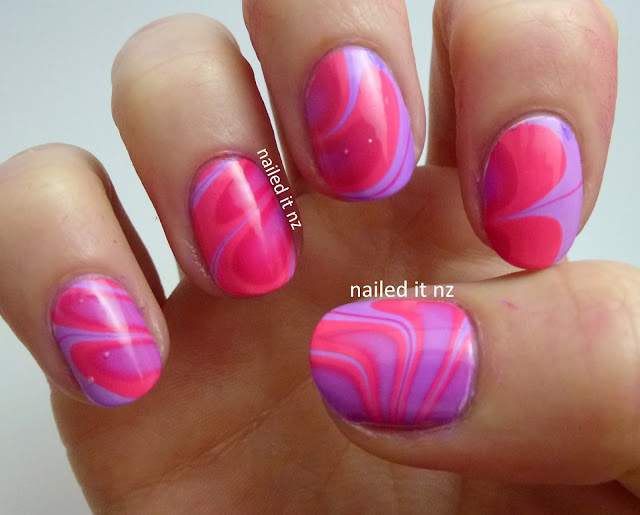 When I water marble, I often fill in some of the colours afterwards if they came out a bit weak or whatever. I started doing that for this manicure, but got bored and created... 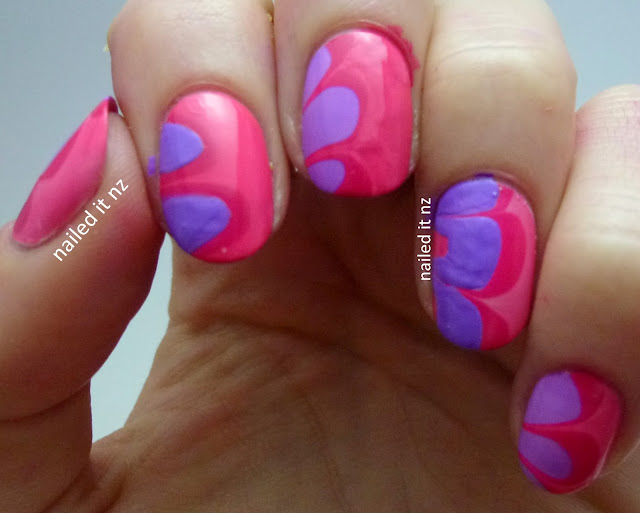 ... this! I love it. It's crazy and wasn't planned AT ALL; I thought I was going to ruin it completely. But no! It's one of my favourites, just because of it's uniqueness. 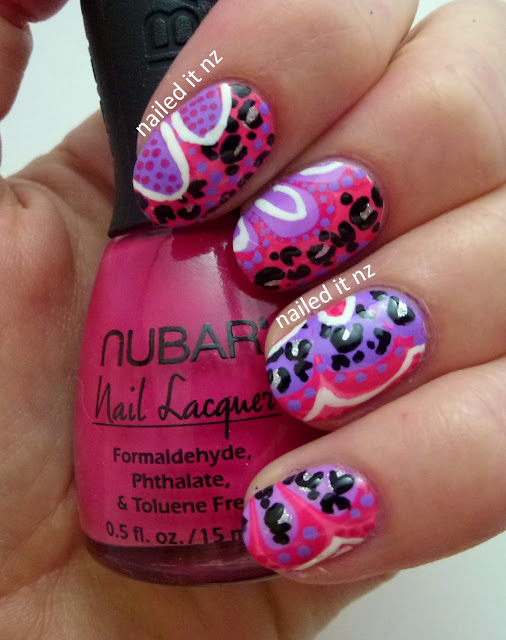 As I mentioned in earlier posts, I've been doing my friend Dale's nails every week or so - these are hers this week! I really like them. 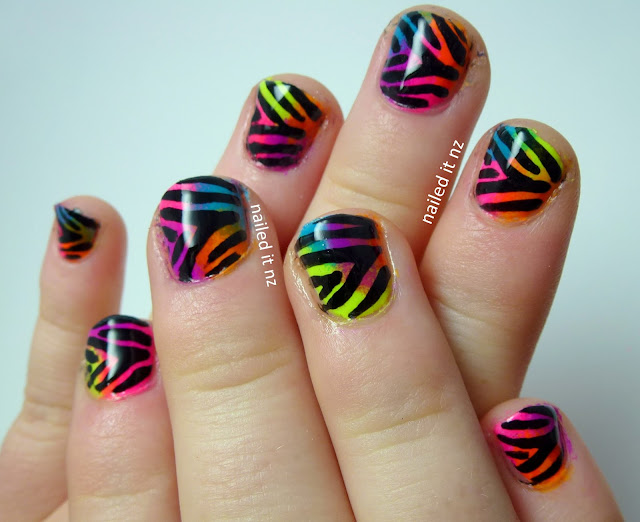 And with all those bright colours I just had to add glow in the dark nail polish! 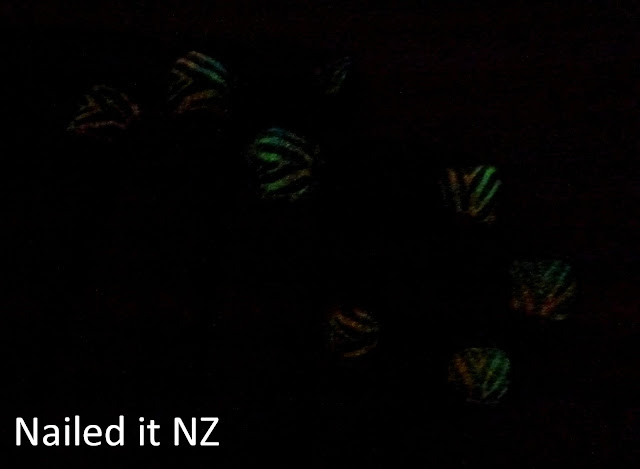 I had my first Trade me customer last night! She was really cool, loved her nails and is coming back every two weeks to get them done again! I'm so stoked! However, if I get the full time job I recently had an interview for I'm going to be a very busy girl!

Can't wait to have money. I'm going to buy so many clothes! I've been using MyFitnessPal for the last month and a bit, and have lost 5kg! I'm so happy, as I'd stayed the same weight for about three years before that and thought it was impossible to lose any. I'm on a no buy (for clothes) until June/winter, as by then I hopefully should have hit my goal weight - and will have an excellent excuse to go shopping!