Over the last month I've been having weekly catch up and nail painting sessions with one of my university friends, Dale! She's had quite a range of nail designs so far, here are three of them plus another one I did on another friend :).

Leopard print! For those that follow my blog regularly you'll know that I love leopard print. It's easy enough, but still takes a while (I HAVE to spend at least half an hour on my nails, haha). I really like the pastel colours Dale chose for these too. From what I remember, the yellow and blue/purple were Revlons and the pink was an OPI. 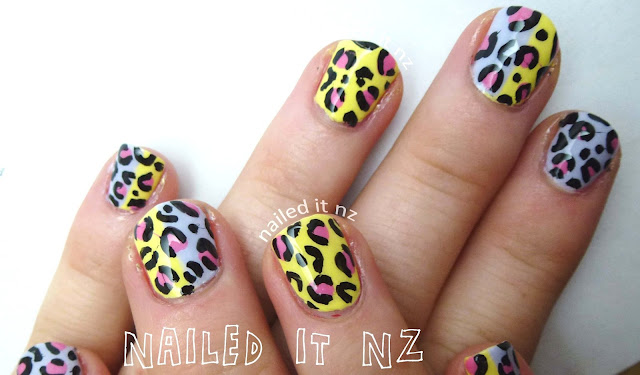 I'm actually doing these slightly out of order - the leopard print was the second design I did on her, but I wanted all the bright colours to be in the first photo in this post.

The first set I did on her (confusing much?) were different designs on each hand. This is because I was practicing marbling with black, brown and gold for a customer, but also wanted to do some cute girly nails :). So, cupcakes and dotty water marble! 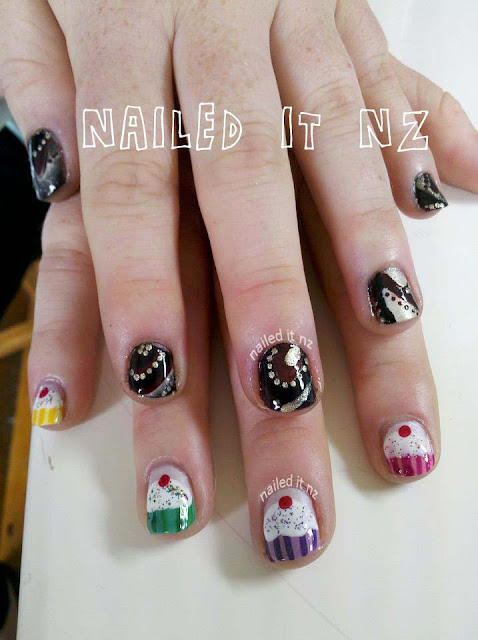 The watermarble was meant to be steam-punk themed, by the way.

Now for my two favourites, the most recent ones. The first picture is of Dale's nails (I love saying those two words together!) and the second of Jaclyns. I love these ones! The glequins sparkled much more in person. This was the first time I'd tried bows, and I thought they looked super cute! 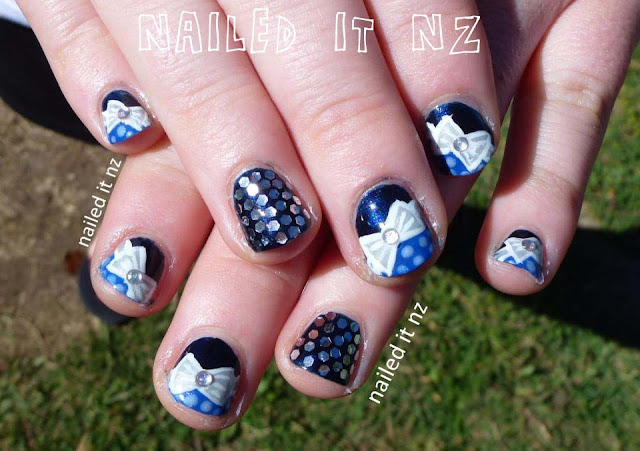 Jaclyns nails were inspired by Supa Nails owl nails, which you can find here. I did the same design as she did on the middle fingers and thumbs, but changed the other fingers to dots. So cute and girly, right? 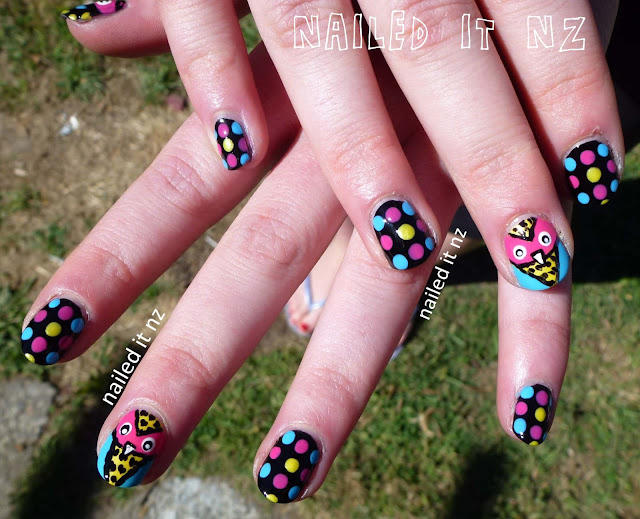 I have heaps of good news to tell you guys, too!

Firstly, in case you missed it - I was on TV! Well, my nails were on TV - and John Campbell from Campbell Live said my name! I'm so excited about this. He's secretly my idol, because I've thought about going into Journalism (and still might, one day) and he really 'made it'. Got his own popular current events show and everything. I won a Marmite competition, which is super awesome and I'm going to Christchurch next week to tour the Marmite factory and get one of the first jars!

Secondly, my Marmite nails being on TV has gotten me some good press! My friend, who's an intern journalist saw my facebook updates about it, talked to her editor and now I'm going to be in the local paper! Photos and everything! It's fantastic timing, really, as I just listed my nail art services on Trade me, so she's going to direct readers to that in the article. Who knows, maybe it'll take off and my rather unsuccessful job search will no longer be necessary!

Thirdly, I won Sincerely Stephanie's nail art competition! I'm so stoked, it's the first nail art competition I've ever won! I got $25 to spend at Harlow and Co. I ended up spending $25 myself too, so I could reach the $50 free shipping threshold. Figured it was better than spending half of my voucher on shipping -  sometimes I hate living so far away from the rest of the world!

I hope every one's having a wonderful day! I'm off to paint my chest of drawers - believe me, they're going to be pretty special :P.