I was a bit late to the party, but I finally discovered Robin Moses. Of course, I've seen her designs all over the internet, but it's only been in the last few weeks that I've really been following her, and when I saw her latest tutorial I knew I had to try it! 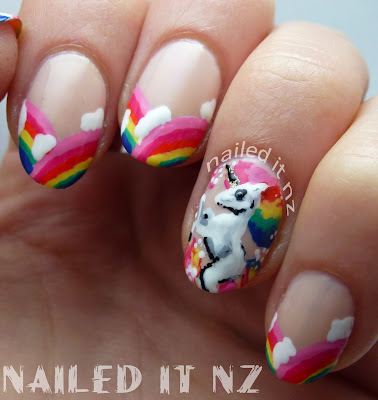 Ages ago someone asked for unicorn nails, and it's been on my to-do list (along with dozens of others - yeah, I'll get there eventually :P) for months now. I just wasn't brave enough to try them! I didn't know how I was going to do it - I wanted to make a decent job of them, but wanted it to be a design I could do on both hands too! When this tutorial popped up on Robin Moses' facebook page I knew it was the one for me.

Isn't it super cute? I LOVE that Robin Moses is a mum and still does nail art like this (even if it's not her own nails). I'm sure some people who see them will think that it's too childish to do on anyone over ten but that's just boring! Unicorns and rainbows are amazing and should be for everyone! I'm 22 and will still be painting my nails like this when I'm 80.


Speaking of ridiculously-cute-and-frilly things, I went a little Photoshop crazy and made this, haha.

I'm really happy with how these turned out, especially the feature nails. The tutorial was really easy to follow, and although it's not for beginners it's good for a challenge! I'm just so stoked the unicorns didn't end up looking too much like sheep. 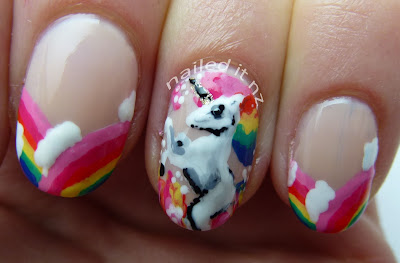 If I did it again, I'd make the rainbow's rounder - some were a bit straight. Not really a big deal but one of those itty bitty details that I'll do better next time I do this! They're similar in some ways to these horse nails that I did a few months ago. 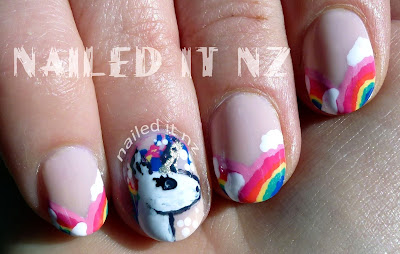 I've been bad and have scratched off the polish in a couple of bits, so I'll remove them after this post and just  leave my nails bare for a bit. I really need to look after them but still can't find my cuticle oil anywhere! I'll order some more next week when I'm less insanely poor and maybe find some at-home recipes in the meantime. 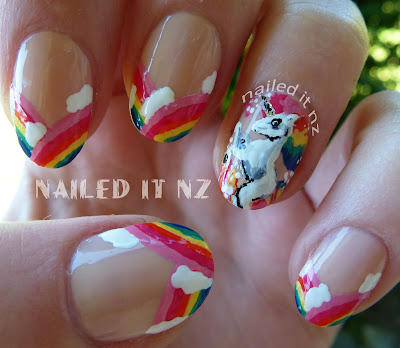 Hope you like these little rainbow unicorn nails and don't forget to check out Robin Moses' stuff- you won't regret it! 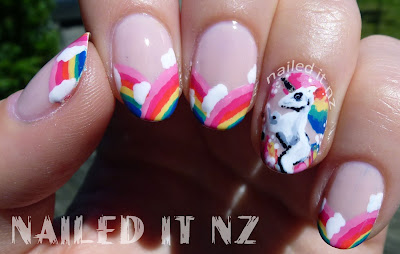