So a few months ago I discovered PackAPunchPolish and thought both Samantha and her nail art were absolutely adorable! She has heaps of tutorials on YouTube which you can find here, and I decided to try one of them! She called it "Polka Dot Stripes nail art tutorial," but you could get away with rainbow nails, dotty nails... whatever. I just love 'em. I'm sooo doing this again. I ending up doing it a little different, but the basic idea is the same. 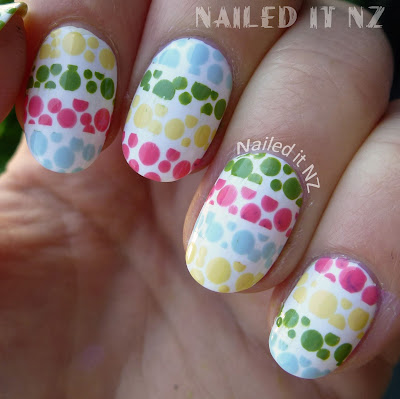 Here's the tutorial she made - so quick, easy and cute!


Here are some more photos...


I think this would look super cool in pinks and purples, and I'd like to try a base other than white. This was only the second time I had used my striping tape and I loved it SO much more this time. Last time I left it on the nails to create straight lines, but the edges were a pain, leaving me less than excited about trying it again. This was much easier. 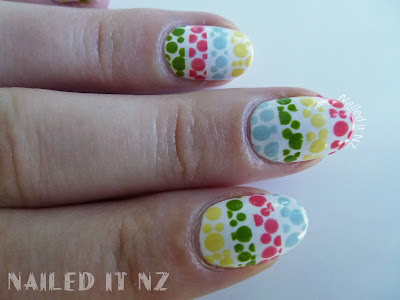 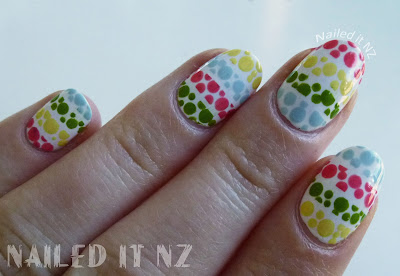 I went a bit overboard in editing the pinkness out in this one, lol... excuse my creepy-looking hands! 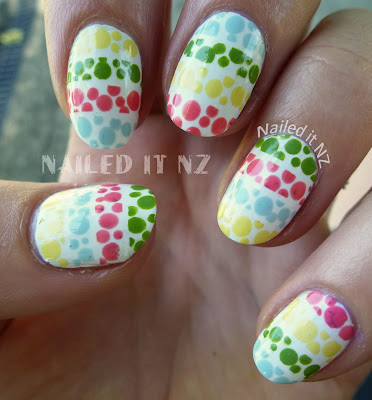 I've been meaning to do a giveaway for ages, and decided to do one for my one year blogaversary. It's still a while away yet, May, but it means I can save up some money in the meantime. Omg that reminds me... today I realised that my car has been illegal for six weeks!! It's registration ran out at the beginning of December and we just didn't notice! I've never left it more than two weeks late before, I was shocked! 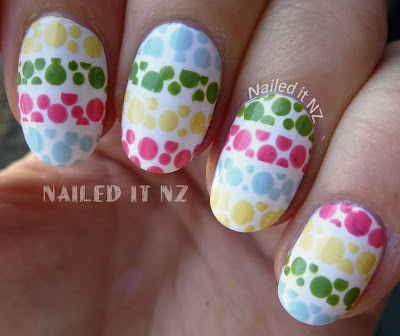 Anywho, hope you like these nails :). It's strange going back to normal posting intervals after the madness that was December, but it's quite nice too. I still have about four designs photographed and ready to watermark and publish, but it means I can use them as back up if I go away or something. I can't do any more video tutorials at the moment because my table is full of stupid plants I have to press for an assignment (lol) but in a couple of weeks I'll be in my new house and can finally get things moving. Yay! I'm also going to start painting local ladies nails for a bit of extra cash :).
Labels: blue China Glaze colourful dots green packapunchpolish polka dots rainbow red striping tape tutorial yellow