Sooo I'm a bit dumb. I saw this nail art competition on Lena Loves Nails, and thought it was HILARIOUS! You need to design a "naughty" manicure, for Cervical Cancer awareness.
"Awesome!" I say to myself, "two of the things I am most passionate about - woman's health and nail art!" And off I go to paint this intricate design on my nails for an hour or two. However, when I returned later to the giveaway entry page, I realised that the competition was US only. SAD FACE!

So that's how I ended up with provocative, naughty, sexy nails. And I assume mine will be some of the more G-rated ones! 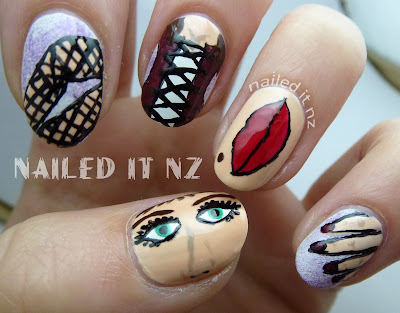 Here are each of the nails, from left to right: seductive eyes, corset and booooobs, fishnet stockings, big red lips and of course, painted fingernails. I'm pretty sure that last one is all you need to be amazing though :P.

I have so many posts in draft form! I'm a bit busy with this annoying and incredibly disruptive thing called real life at the moment, and nail-painting is a bit lower down the list than usual, so I'm posting neglected photos instead. The post I'm most excited about is all about nail art theft and why it's a super-big-ginormous deal. It's going to be massive, massively awesome though too. I've been collecting screenshots for a while for this baby! 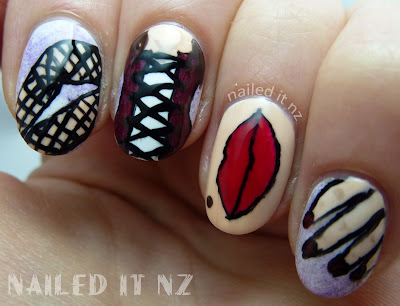 Anyway, time to do the married/love thing and snuggle up on the couch watching Game of Thrones! Omg we started watching it two or three days ago and love it! We also zoomed through the first ten episodes of Revoulution; best TV series ever!! I lie, I liked Lost more. Jessie, stop blabbing.

Hope you like my naughty nails! Has anyone else ever done provocative nail art? I know that the Daily Nail did breasts on hers once, I thought that was awesome :P.