Day Three
Inspired by a band


I had a brief moment of panic this morning when I realised it was the first of December, AKA Take Two (31 day nail art challenge) time and I still had only done one manicure in preparation for it! Still, it wouldn't be a challenge without a bit of stress would it?
I decided that my band inspired nails would be Missy Higgins. I guess she counts more as a singer-songwriter than a band, but when I made the list, "band and/or singer" was too long to fit in. 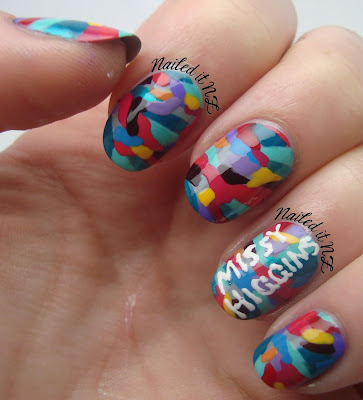 I always liked Missy Higgins, but she wasn't in my top five. However, after hearing her latest album she's definitely in my top three! I love what she sings about. My other two favourites are Pink and Taylor Swift... although I'm getting a little sick of Taylor only ever singing about how much she hates/loves her boy of the week. Missy's new album is simply amazing, and some of the songs really mean a lot to me. My Grandad has Dementia, and although it's relatively under control at the moment, I can relate to the song "Cooling of the Embers." I also really like "Hello Hello," "Everyone's waiting," "If I'm Honest" and "Tricks," but my absolute favourite is "Hidden Ones."

It's just so much deeper and motivating than your average song. Here's the song and some of the lyrics:

"She's holding a torch in her hand
Pointing towards Heaven
And on the streets below her, people living out of trash cans
Are trying to believe she's got a plan"
(Statue of liberty looking over everyone else who is struggling to get by. Also liberty/freedom, "is there a point to life" etc ).

"Over the water to the east
Two million in a square refuse to sleep
Till every pleading voice is heard
And all the world has seen
Revolution: fallen king down to his knees"
(My favourite part - I assume this is about the Arab rising)

"There is a choice
You can follow the leader
Or use your voice
'Cause this will just keep up
Until we make a loud noise
And the hidden ones speak up"
(The chorus - so inspiring!)
Right, so as you can see, I love Missy and her songs. Now on to the nails! 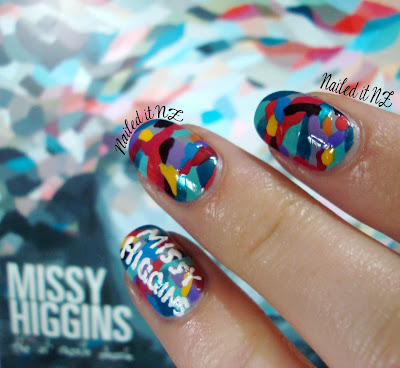 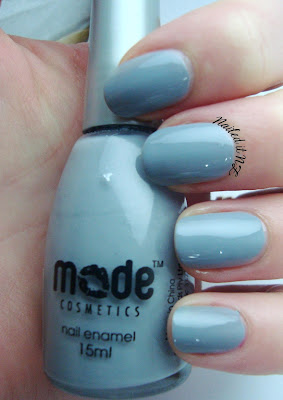 First I painted them grey with VIP by mode. This is a one-coater, so I naturally love it! In fact, all of my nails dried really fast as there weren't tons of layers! Here's a couple of photos showing the painting progress... 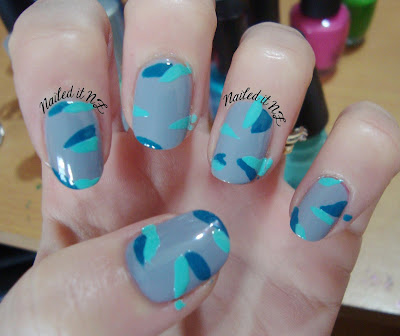 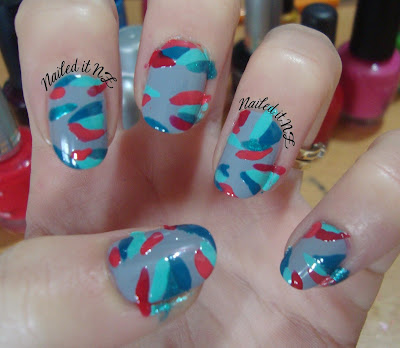 They took about an hour to do, but I only did one hand. Normally I do both, but I was in a rush to get this up, plus I'm going to be taking them off tonight anyway to do tomorrow's nails! 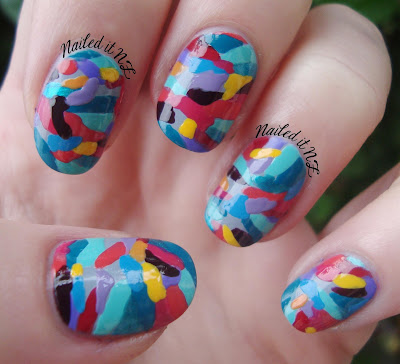 Here's what they looked like before the white writing. I think these look cool just like this, but it's not that easy to identify them as Missy Higgins nails! I wish I had some lighter shades of these colours though - they were a bit too bright but I wasn't keen on mixing them all. 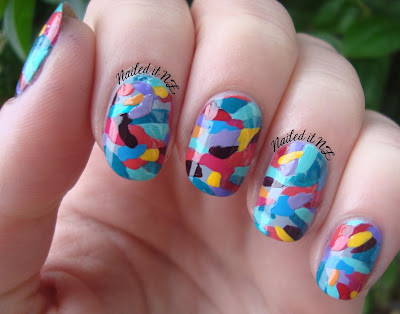 Here they are with the writing. I really wanted to use this nail art pen that I have but I can't find it anywhere! So I had to make do with my M Eizilan dotting tool thing, which wasn't really ideal and is at least part of the reason that the writing's a bit of a mess!

Another photo of my fingers next to the cover. 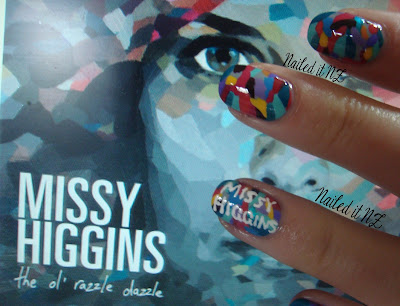 The link for today's link up is: