I'm so excited to show you these nails! While they aren't as awesome as the likes of Nail Nerd's cartoon nails, I'm still very proud of them :D. And I even did a step-by-step tutorial for how I did it!

Firstly a little background - I LOVE the movie Anastasia. It's one of my all-time favourites, and my number one favourite kid's movie, with Enchanted coming in a close second. It got me very interested in Russian history and I've read several books about it and am very familiar with the Wikipedia pages associated with it! It's just so much cooler than Disney movies. This one's distributed by 20th Century Fox, by the way. Instead of the handsome prince charming who saves her, she's tough and saves herself... but then gets the guy too because hey, he's pretty awesome. Lets just ignore the fact that it's completely historically inaccurate and the real story is tragic...


Here's a few pictures to show how I did these. After sponging on the background I outlined the figures in black nail polish. 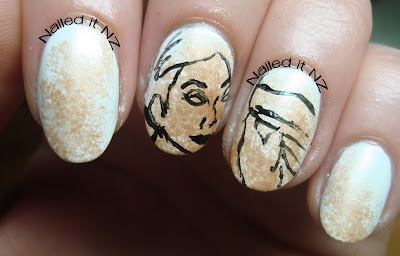 I then filled them in with various colours - I had to mix a few different polishes, from what I remember. 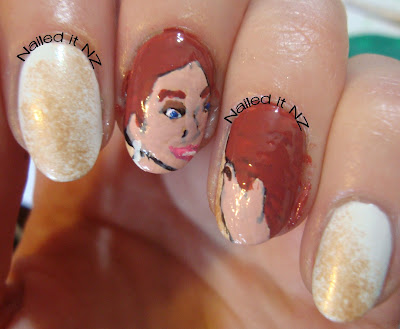 Then I re-outlined them and added the little gold chains for her famous necklace. The lips really annoy me but overall I really love this manicure. It was my first serious attempt at this sort of thing (unless you count my Simpsons ones) and it inspired me to do more! 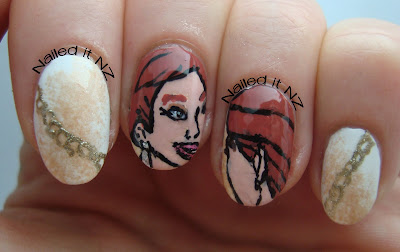 And before someone asks - no, I definitely did not do this on both hands. My hands are steady, but not THAT steady! 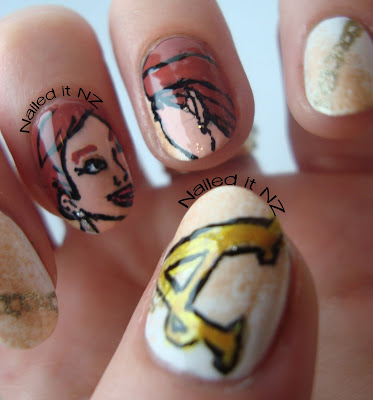 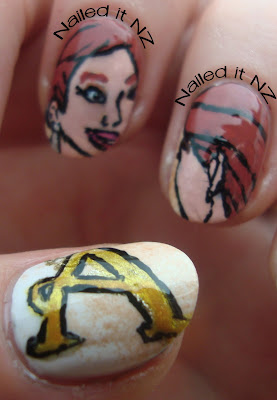