I am actually crazy for attempting this. My internet capped yesterday and now each page takes a good five minutes to load. I bet this won't even publish, or I'll be tearing my hair out by the time it finally does. But hey, I guess this is my version of living on the wild side, so here we go.

As you can see, these are not part of the whole short nail thing I'm doing at the moment. I've done another one but it's going to be a guest post on another blog (although I will post a brief version of it on here as well). I did these about a week ago- HA! While confirming that on the file I accidentally set the background to 13 tubs of yoghurt. That takes talent.
Anyway, I just made these up as I went along and it ended up being a good excuse to compare nail art tools. Here are two photos - both were kind of the end result as I didn't add the musical notes until about a day later. 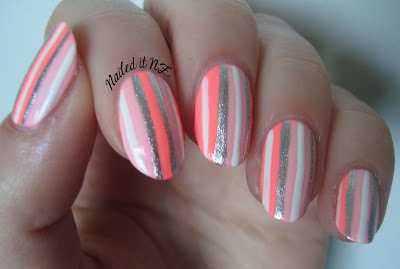 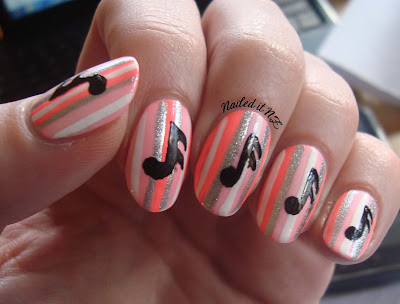 Omg it's taking so long to load. Broadband speed, come back, I miss you! 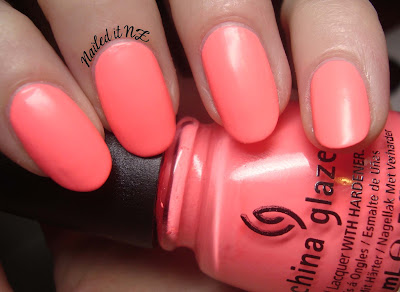 This is the colour I painted my nails first. I love it SO MUCH! It's China Glaze - Flip Flop Fantasy.
It seriously just glows off your fingers, no photo could show it's pure awesomeness. 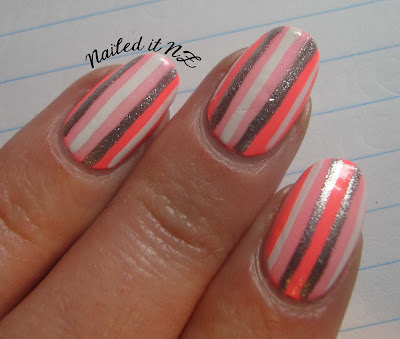 I was going to originally make the stripes about three times as wide, but then it just ended up this way. It's weird - you see that light pink? I got that colour by applying Revlon's Powder Puff over Flip Flop Fantasy. It was an accident, but a good one! 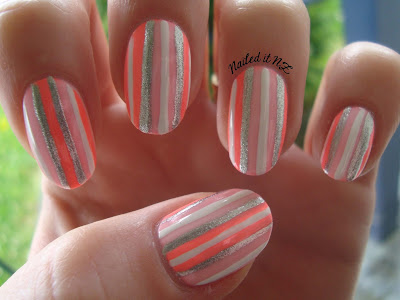 Then I added the notes. I spent a good 10 years playing piano so this suited me as a person quite well. I decided to compare different methods of nail arting - can't think of a better way to say that so it's staying. So, here I have a Sally Hansen nail art pen, some electrical tape, a fancy hole punch, Jordana's "Black" and "Black mark." 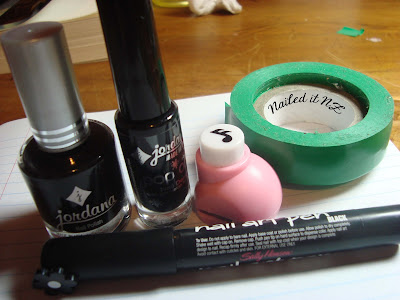 This is how I did it with the tape and hole punch. It's fairly self-explanatory, just this then I painted over it with black nail polish and pulled off the tape. Your nails need to be completely dry though! And stick the tape on your palm a few times first to get rid of some of the stick. The hole punch was being a pain and didn't do a very clean cut sometimes :( 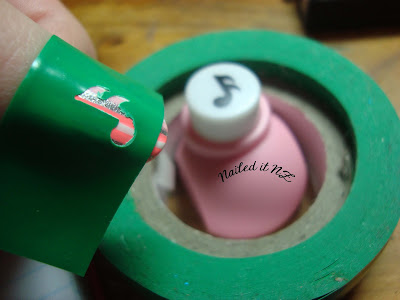 My middle nail I did with the nail art pen. I really just don't like this pen. I thought all nail art pens in general were like this until I got a new white one from another brand. It's just... dumb. Kind of watery or something. This is probably the most I've ever used it, lol. Sally Hansen is generally pretty good, so maybe I got a dud one? Stink if so, it was like $20! Let me know if you have any of their pens! 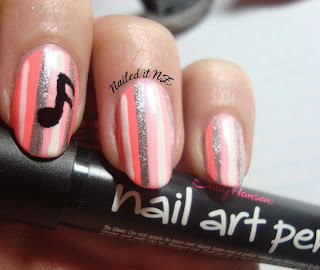 For the last three nails and other other hand I used "Black Mark" and a dotting tool. I lovvve this polish. It gets gluggy but it's worth it. I use it more than anything else I have, bar top and base coats. 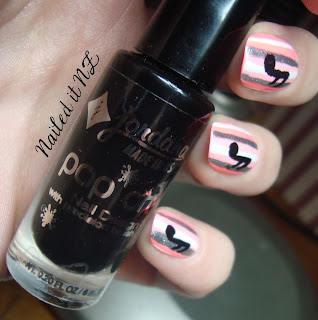 Verdict? You tell me. Personally I preferred Black Mark for ease of use, but those notes aren't as stylish as the others. But one more thing to bear in mind... 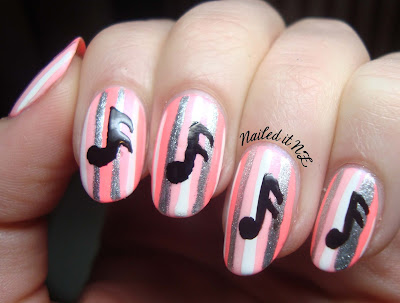 THIS happened to the Nail art pen one! I hadn't put a top coat on yet, but considering the rest didn't smudge or anything I find it pretty shocking that this happened. 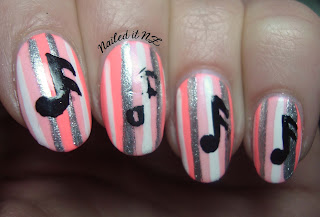 So yeah, that's my little comparison.

Now, I just want to have a little moan for a bit. I have major broken body problems at the moment and it's driving me nuts and playing with my emotions a LOT. I've known I've had PCOS since I was in high school, but I recently found out that I also have Hyperthyroidism and (probably) Endometriosis. And the full set of symptoms to go along with it - I won't go into detail but it's not fun and I'm in pain a lot - pretty much constantly.

Basically, they're all incurable. They're manageable, but I'm not at that stage yet and I'll probably be having surgery for the Endo within the next few months. I'm seeing another specialist (because my last one stabbed me with this awful thing called Mirena and left me to it) on Thursday, and I can't wait. This lady is meant to be the best in NZ so hopefully she can help me out. I don't know, I just felt like unloading on here a bit. My blog and nail art make me really happy and I'm really lucky to have a wonderful support husband, family and friends. So it's not all bad! I'm not really sad about it or anything, actually I'm normally a ridiculously happy, excitable person but it's been a bit rough over the last few months. If anyone else here has any of these conditions then let me know! I might do some "find a cure" nail art for them all at some point, with the ribbons and that. Because they REALLY need to find a cure.

On another note, this is the photo I accidentally made my screensaver. it's my mum's fridge, and yes, she's crazy. She was sooo proud that she got it all for $10! I was more concerned about the fact it was all past it's best-before date, but I guess technicalities like that don't bother her as much, lol. I think it's just about all gone now though, which is impressive seeing that only four people live there and it's only been a week or so! 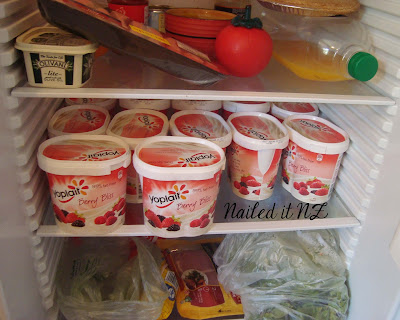