My experience with nail foils :(

Nail Foils... Eurgh.
I heard about these ages ago, but had never tried them as I figured that I could paint on most of the designs by myself and have more control. Plus, not everything I had heard about them was great...
However, Born Pretty Store had a 50% off sale on their foils - they were down to $2.50 US roughly, so I bought a set - after all, what could I lose? I chose the American flag because I figured it was quite a detailed design and if I hand-painted it on I wouldn't be able to draw the stars, they'd just end up being dots! 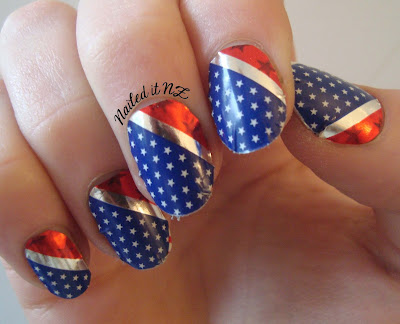 This is how it ended up. First impression - WOW! Second impression - YUCK!
Question - who here has covered their school books in Duraseal? That sticky plastic film with designs on it?
So you know how when you haven't put it on right you get the annoying creases everywhere? And then you spend the rest of the year trying to flatten them out with no success? As you can see, that's what this turned out like. 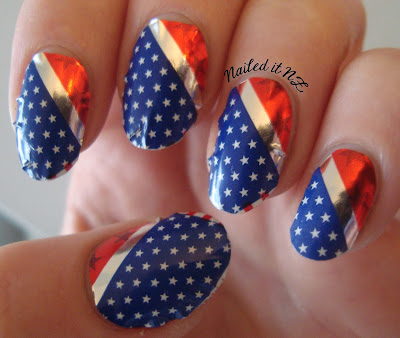 So annoying!! I am bearing in mind that this was my first attempt so it wasn't mean to be perfect but it was just so BAD! There were three things that were really terrible...

1: Creases EVERYWHERE. Well, except my pinkies. They're smaller and flatter than the rest of my nails so were a lot easier to apply. The rest of them were really hard to straighten out - it says on the packet that you can stretch them to make it fit but it really isn't that easy. 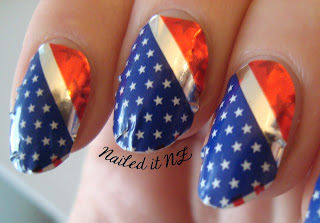 2. The ends look gross. They say to file downwards with a nail file, which I did.... but either I did it wrong (somehow) or the foils just fail. They're all rough and yuck and I don't know, just gross, as you can see. I applied a top coat after just so I could wrap the ends, hoping they'd feel a bit better but it didn't improve them enough for me to keep them on. 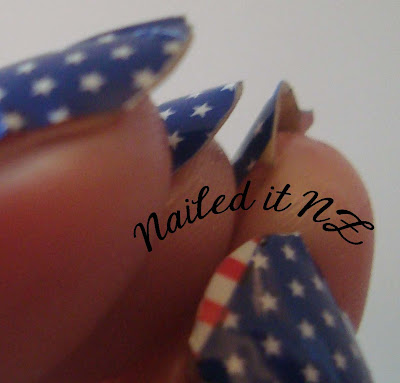 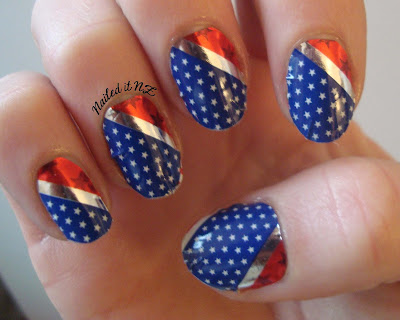 3. The worst on all... they destroyed my nails underneath! They say to take them off in warm water, which I did. However, maybe I was meant to soak them a bit longer, as when I peel them off strips of my nail came off with them! I didn't notice at first - especially on the left hand because that wasn't as bad (except for the thumb). But the right hand - omg, it's a mess! (Ignore my yellow nails! Got a post about it HERE!)

Crazy eh? As I said above, it could have been my fault for not soaking them for long enough or for putting the top coat on. I'm not really going to know unless I try again... which at this stage, I won't.

The packaging was quite nice, at least... But yeah, that's my story about nail foils. Not a good one, I'm afraid. I found a post from another nail artist about this as well - click HERE to read it.
I feel a bit bad saying all this about Born Pretty Store, since they gave me some stuff to review a while ago, but meh, I'd rather be known for being honest than get heaps of free stuff and feel like I HAVE to give something a good review when it doesn't deserve it. As a bit of a disclaimer or whatever though - 90% of the stuff from BPS I've loved. Oh yeah, the link to where I got these from it HERE. 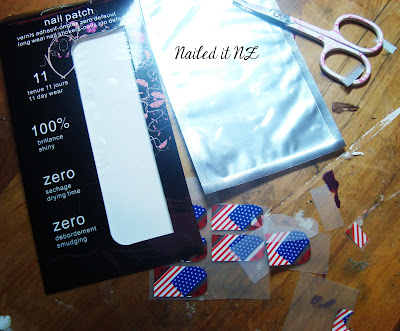 Also - I BROKE A NAIL! This is SO much more traumatic once you do nail art. But now I'm kind of glad - I was planning to cut them anyway soon as they were in pretty crappy condition. Plus typing is a lot easier now haha. And they look a bit nicer - as the cm or so that came off each one was particularly yellow. I have one more design left to publish of my long nails, but after that they'll just be little stubs :s.


My last exam is in four days! Yay!