Nail Polish Stained My Nails - How To Fix Them!

Update: My nails are no longer stained, check the bottom of the post to find out how I fixed them.

This post has turned into something of a experiment - how to get rid of those awful, embarrassing nail stains. First though, I'm going to show you what nail polish I used and give a little background about my nail's health.

I started nail art at the end of April 2012 and made this blog, Nailed it NZ, in early May. To be honest, at the time I didn't even know that nail blogs existed, let alone know that they're a massive thing. My friend over at A girl with some clothes has a blog with fashion and a bit of nail art too, but honestly I had no idea how big the world was that I was entering. I also didn't know that base coats existed! Which, with me painting my nails almost every day led to me quickly getting yellow-stained fingernails. Gross! Ever since then (June 2012), I've used at least one layer of base coat, and I've been patiently waiting for my previous mistakes - the yellowness - to grow out. Here's a shot of them at this stage. 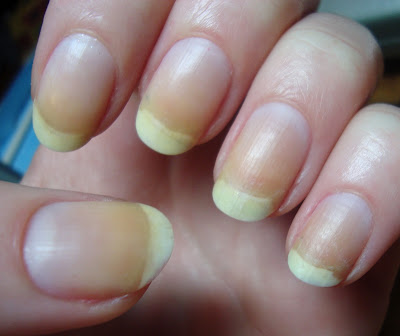 But then THIS happened. Introducing "Lilac Hearts" By Jordana. 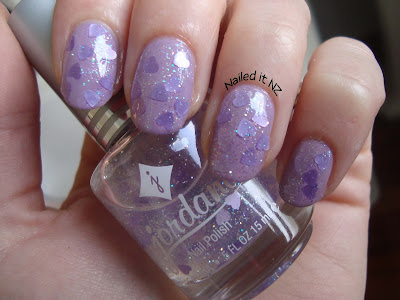 Pretty, right? I spent a long, long time trying to get the hearts out of the bottle, but I thought the final result was just adorable. That's Jordana's "Lavender Fields" in the background by the way - "Lilac Hearts" is clear, which made it even weirder when it killed my pretty fingers. I know it wasn't "Lavender Fields" that did it, because I use that polish all the time and it's never done anything.

I did these nails yesterday, and today (typical me) I got bored in class and started peeling them off. To discover... 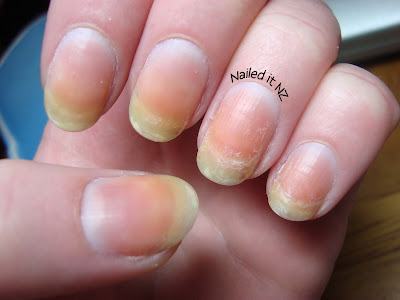 THIS!! They're RED! So far this seems like a permanent stain. I'm expecting they'll fade to yellow but I could be wrong - I've never experienced something like this ever before with my nail polish. Yellow, yes, red, no. And yes, I'll admit that they're in pretty average condition, especially the pinky and ring finger. I'm still trying to train myself not to scratch my nail polish off - it can take off layers of keratin as well and damage you nail, which is what has happened here.

How did it happen? My one and only plausible theory is that it was because there were so many coats of "Lilac Hearts." As I said before, it wasn't easy to get every heart out of the bottle, and I did so many coats just putting them on. I think it was the hearts themselves that caused a lot of damage. If you look at my middle finger you'll notice the staining is in patches, almost dots... almost hearts. And if you compare this to the other photo with the polish on the hearts and splotches look to be in the same spot. I've noticed it's the same with rhinestones and the like, too.


The next two photos are after the staining, and after I'd attacked my nails with a bunch of mostly useless treatments. After Uni finished I sat down and tried my best to get rid of/dull down the stains for over an hour. They look a bit nicer now but the colour hasn't really changed much. 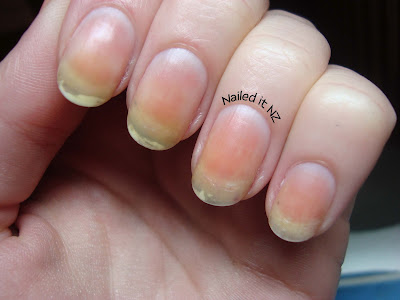 But I'm working on it. Today I used a bunch of lotions and tried a bunch of ideas I found on the internet to tone down the staining. I also buffed them, cut off some hangnails, and filed them. 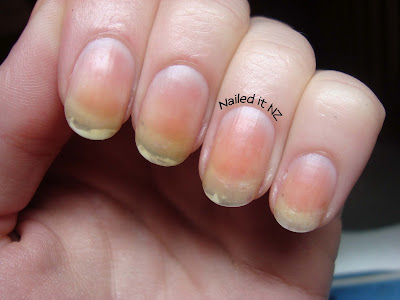 I will post updates as I learn more about nail staining!

It's been five months and my nails look quite different. These are what my nails look like now (well, actually a month ago) - still a bit stained but a lot lighter than any of the above pictures. They're basically how they were before the "big" stain. My plan at this stage is to see if it grows out. 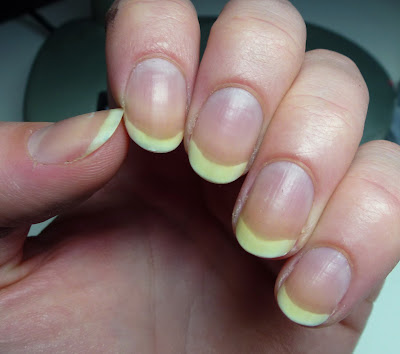 I worked a lot in 2013, which left little time during the weekdays to paint my nails. I got in the habit of painting my nails in the weekend, then once they started coming off mid-week I'd remove them and leave them bare for the last few days of the week. There have been times when I have had them bare for extended periods of time; a couple of weeks was my longest "stint." And one day I looked at my nails and realised that my stains had disappeared. Completely.

This IS the "miracle cure" everyone wants. Sure, stains will fade, stains will grow out a little, but unless you give your nails a break fairly regularly they will not go away altogether. Here are my nails now. 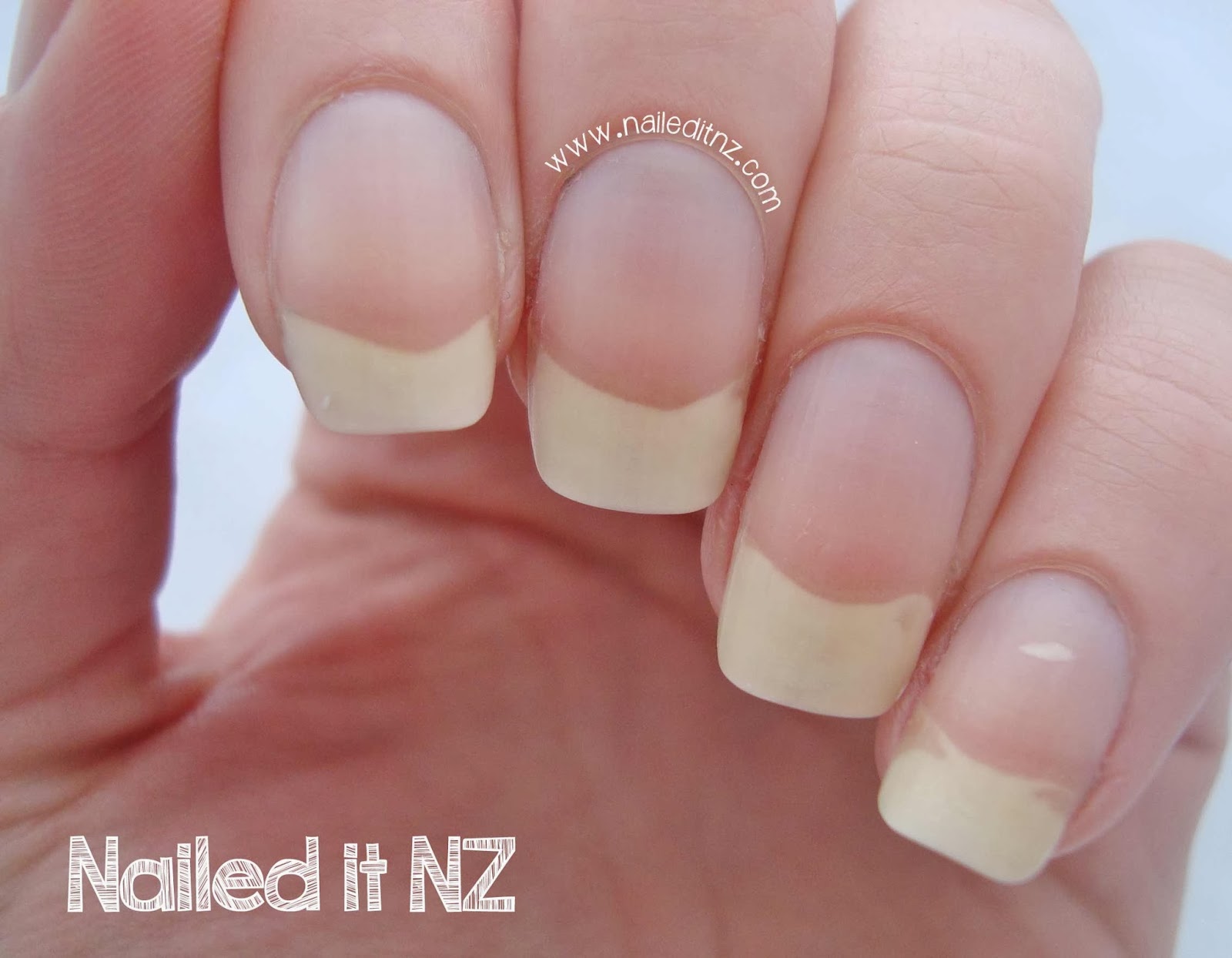 Long, strong, healthy and unstained. This is just from giving them a few days break after removing polish, and of course, wearing a base coat. I do give them a longer break if they've gotten really stained from the last polish I wore, however.

So, if you have stained nails and want them to go away, just give them a break once in a while! It may seem slow, but take a picture before and after and you'll see the difference. I know that when you've got badly stained nails the last thing you want to do is to let everyone see them, but if you want them unstained it's the only way I've found that is guaranteed to work (and not damage your nails and/or wallet in the process).

Things I have learnt:

I hope this helps you guys, and feel free to go give my Facebook page a like to keep up with what I'm doing on my nail journey! I also have a YouTube channel where I do tutorials and give you tips - hope to see you there ☺.