Both of these nails aren't the kind I'd be too keen to wear every day, but I still think are pretty fun.
I had a ball last night that was themed "things that come out at night," and I went as a vampire. So, I painted my nails with bloody drips and bats!
One of my 'followers' had the idea of using stamping on my nails for this themes, which I thought was a great idea! But I also wanted to free-hand some drips, so I went for both in the end. 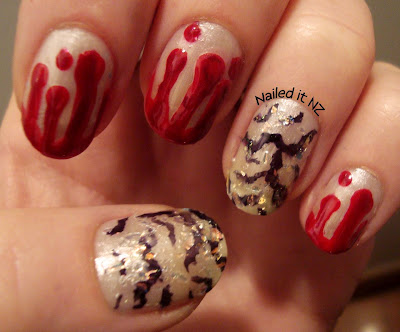 The base colour is Jordana - Beige Frost. I don't even know if they sell that colour any more, the bottle looks about 10 years old! Polish is still fine though, of course (I ♥ Jordana!). I then stamped a bunch of bats from BM-213 all over my thumb and ring finger. It looked a bit plain like that though, and the black wasn't very dark so I painted over a coat of "Luxe and Lush" by China Glaze.
Then I did the blood drips! These were so easy and looked so cool! I only used the brush that came with the polish (Nutrimetics - Ruby Rose). The trick was to let the drop of polish at the end of the brush hit the nail first, then carefully pull back to make the rest of the drip. I used a dotting tool to make the extra spots of 'blood' but that could have probably be done with the brush as well. 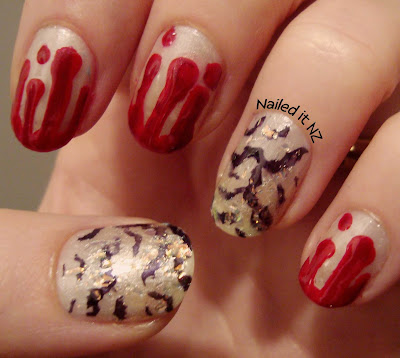 I ended up highlighting bits of the red with "The one that got away" by OPI, mostly because I just love that colour. I used a thin brush for that.
The photos aren't great I'm afraid - I was in a bit of a rush to get ready.

This manicure is one I'm submitting to Nail Narcotics giveaway/challenge. She's a really awesome nail artist so check her blog out!
I had a good long think about what to do for this competition. I wanted to be as original as possible - but that's very hard to do - there's so many designs out there! I ended up going for a McDonalds theme, as I had a hole punch in the golden arches shape, plus I worked there during my gap year. 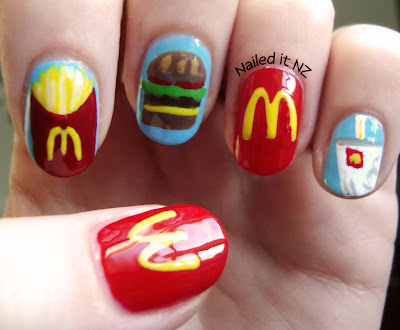 I won't bother to explain how I did the free-handed stuff... basically just a small brush and lots of colours, haha. It didn't actually take that long, which was a nice surprise! 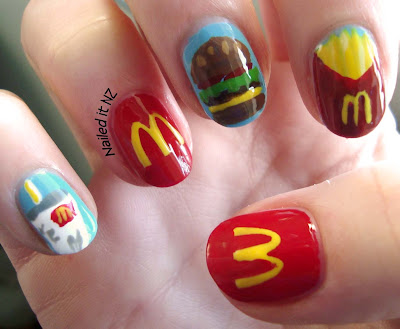 For my thumb and ring finger nails, I hole-punched the M sign into some electricians tape and stuck it over my nails. I had painted them first, so they were dry by the time I got back to them.
I then painted over the now-stencils with a yellow. Unfortunately I'm not great in the yellow department right now. I have one LA colors one that's seriously getting low, plus it's not opaque/thick enough to go over the red in one coat. I ended up using an "Art Deco" yellow which is old and gooey and made it smudge a bit but hey, it worked out for the most part. I have a new China Glaze yellow ordered so I can't wait for that to arrive! Anyway, then I peeled the stickers off and fixed up the bits that went astray with a little brush. 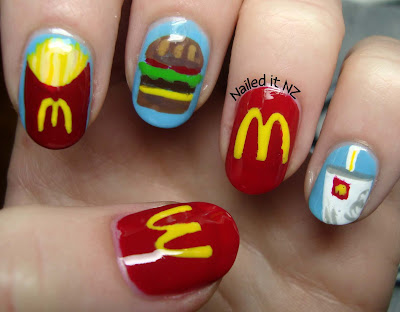 And yeah, that's pretty much it!
Other ideas that me and my husband came up with were pizza, lollies, liquorice allsorts and fruit. So I might try those out some day too, just for fun.

Now I have to go finish an essay that's due tomorrow that I'm having serious issues with. Yay.
-_-