I've been super busy/stressed lately and haven't done anything super exciting, so I'm making up for it with some pretty swatches and a couple of really nice BM plates.

I'll start off with Avon - Romance. This is my sisters, and I think it is the most beautiful colour! It's got quite a metallic look to it, and it really glows in the sunshine. As you can see, it's a very light, silvery pink with plenty of shimmer. There were a few problems with it though - although don't take anything I say about this one too seriously as I have no idea how old the nail polish is! 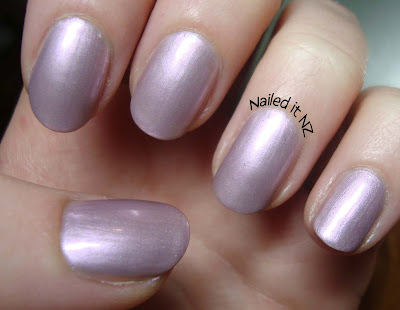 The most frustrating one for me was that it took ages to dry. I actually reapplied it after being out for the day just to take these photos, because it got pretty messy! Related to this is the problem that it took several coats to be completely opaque. I think at least three in the end - sorry I'm not 100% sure... I've swatched three very similar colours in the last few days! 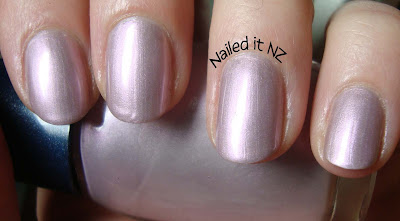 Once it was full dry (a loooong time later - might have actually been the next day when I did this) I decided to try out one of my new bundle monster stamping plates over it.
This is with a 4me silver stamped (BM-201) over 'Romance.'

It's very very light and at first glance you don't see the pattern - but I really liked it! I'm not going to do it again with that pink, but with a slightly darker and faster drying polish it would look great, I think. 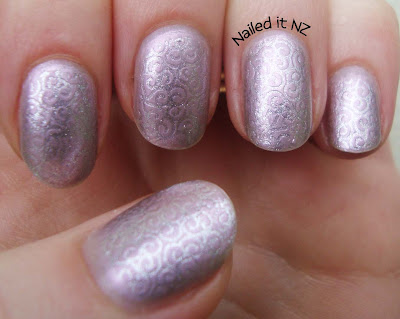 Next I have OPI's 'Play the Peonies.' FINALLY! I bought this off trademe almost two weeks ago and it only just turned up today! So annoying... it shouldn't have taken no more than four days. Anyway.
Again OPI doesn't disappoint. I'm eternally in love with their brushes. Perfect for my huge nails, and you don't have to keep dipping it into the bottle to get more. As you can hopefully see, it's a very very light shade of pink. When I look at it, I think Ballerina :). I can't say yet how quick it took to dry because I immediately took it off to swatch... 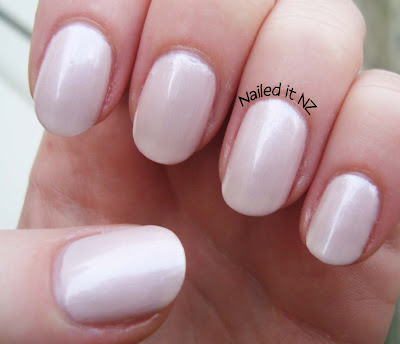 ... 'Powder Puff', by Revlon. I was really excited when I found this on special, as I have another matte suede of theirs (Emerald City) that I ADORE. Not this one, though... It took FOUR coats to make it look like this. I think maybe it's just a bit new - the mixture was really thin. I'll give it a few months and hopefully it'll thicken. Still, it managed to dry pretty fast despite the four coats, and I decided to dress it up a bit. 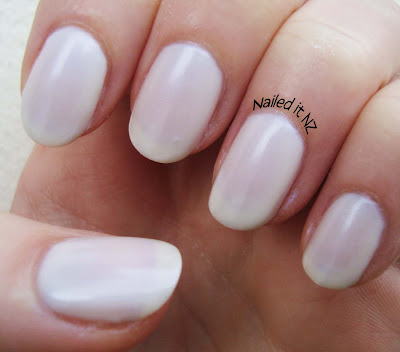 Zebra stripes! I used BM-223 and a Black Jordana Nail polish. Again, that black is very new and didn't work very well for stamping. I read somewhere that the best polish to use for nail stamping are those that go on opaque after one coat. Which this normally does... but as I said, it's new and therefore quite thin. 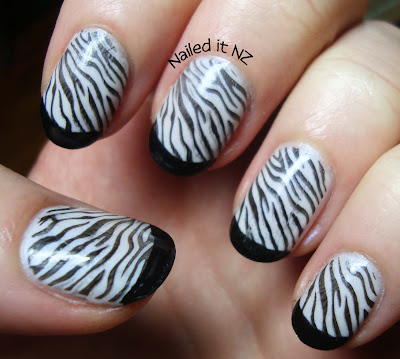 I finished it off with a french tip (I guess that's what you'd call it?) around the ends, just to mix it up a bit. 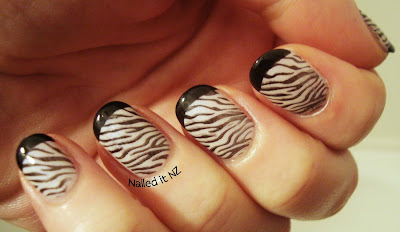 Hope you like my collection of swatches and stamps I've posted today! I'm going to try make an effort to get more involved in other people's blogs - but starting from next week! This week is just too... bad. I have a speech tomorrow AND on the 25th and am probably going to die. Both times. In which case, farewell.
Oh, and I can't forget the essay due on the 24th. Argh! Wish me luck, I'm going to need it!