Today I woke up with the wonderful realisation that a) I had finished my latest essay and b) It was almost the holidays! I couldn't really do anything else at home for my other assignments, so decided to paint my nails (the first time without feeling guilty for a looong time, to be honest!). I roughly followed this tutorial, which you should definitely check out. It's by MrCandiipants, who is super weird at times, but still really cool. Mine turned out a bit different to hers - not as straight lines, and green-to-blue instead of dark-to-light. I had to mix a lot of colours - I only used three colours straight from the bottle and the rest were some kind of mix of the ones next to it. I think it turned out okay though! 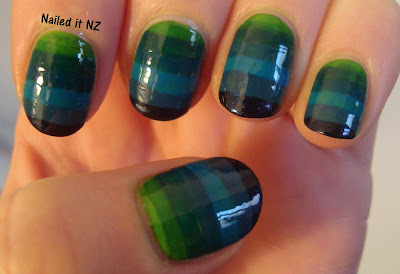 See the blue in the middle? That nail polish has gone DISGUSTING! The thickest I've ever seen and it's only six months old! I don't know why, really. I bought it in summer and now it's winter so that could have impacted it... but most of my other nail polishes are fine, so it's a bit useless if you ask me. Then again, it was CR and only cost $2... so there you go. 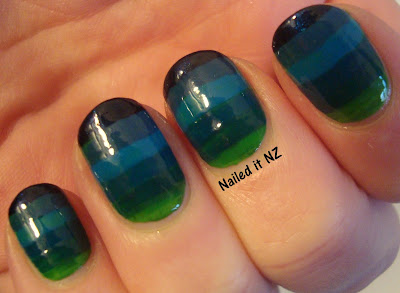 I'm going away at some point in the next few days for quite a while, hopefully. So I'll try to organise this thing to publish a couple of posts while I'm away so I don't get too behind. I bet I'll come back with another 10 designs ;P.

I might do a post on here (or make a tab) about nail care and safety. I need to know more first though, and need more nail care products. I've been researching the dangers of nail polish and acetone fumes lately and now am only going to be buying nail polish without the "big three" in them. It'll cost a bit more but should be better in the long run - plus China Glaze etc has much nicer polish in general!