These are my last two designs I had saved up - unless you count the two on my sisters nails, but when they were taken her cuticles were in really bad shape. So I'm either going to re-do them on her or just do the same designs on my own nails.

Turns out not painting my nails and letting them breathe gets too boring for me. They're still quite short, but long enough to have some fun with! I STILL can't find my camera charger (I now have a $5 reward for whoever finds it haha) so a couple of my new designs only have phone photos.
I'll start putting them on here in a couple of days.

Anyway, so here is a spiral design I made up... looks a bit spacey too I think. I don't even remember how I did it, but I remember it was really thick and I kept knocking it on things, and ended up taking it off pretty quickly. Still, at least I like it now! 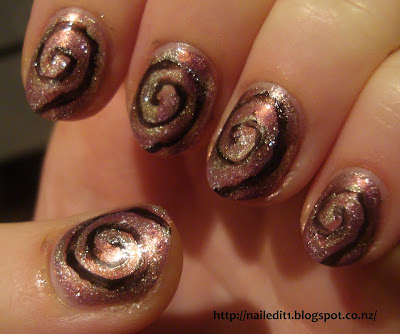 This was my first attempt at gradient nails with a sponge. I think they turned out pretty good! But then I went and ruined it by doing the tips (shown in the next photo), which took away some of it's awesomeness. 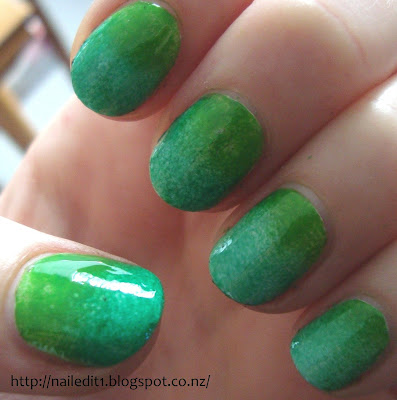 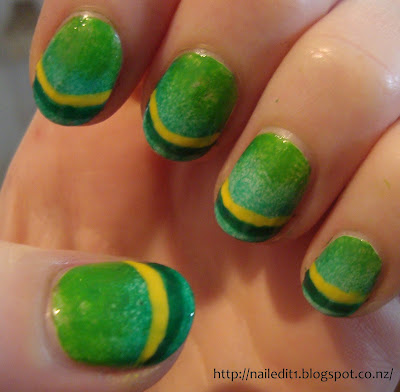 I have recently decided to stop using my normal nail polish remover for removing my nail polish - I'll just use it for cleaning up around the cuticles. Reason? It's 70% acetone, which isn't good for your skin when you use it as much as I do! (Seriously, I've gone through about five 270ml bottles in about three months. Shocking). The same brand has an acetone-free formula which will do the same thing with less harm to my skin and nails.

Who's seen the China Glaze Capitol Colours (Hunger Games) collection? It's beautiful!! I love the Hunger Games series, so it's even better in my eyes. I just bought this one, electrify, off ebay for cheap! I cannot wait until it comes, I've had my eye on this colour for ages now.

Also, yay, 16 followers now! I'm always happy when I see another one :)
Hope you like my little nail blog.

ONE MORE THING: Is anyone interested in any tutorials for any of my designs? Let me know if you are.